Colorectal cancer is the most frequent cancer and the third most common cause of cancer-related mortality worldwide [1]. CRC is a well-studied malignancy for which extensive genetic abnormalities have been described, with well-defined risk factors, slow progression, and identifiable and curable preneoplastic lesions. Although the five-year survival rate is as high as 90% in patients with stage I disease, a dramatic reduction is seen to slightly larger than 10% in patients with stage IV disease [2]. Approximately 20% of patients with CRC already have metastases at diagnosis, and metastatic CRC is mainly an incurable disease [3]. CRC is considered a heterogeneous multifactorial disease showing drastically different prognoses and responses to treatment, indicating the relevance of understanding specific pathway abnormalities to improve diagnosis, prognosis and therapeutic strategies.
MicroRNAs (miRNAs), a family of endogenous small non-coding RNA, are involved in the regulation of multiple biological processes and metabolism [4,5]. The dysregulation of their expression is strongly related to development of cancer through the alteration of biological functions [6]. The recognition of miRNAs as regulators of gene expression has identified them as the most investigated epigenetic elements involved in cancer, so they could potentially be used as therapeutic targets, as well as diagnostic and prognostic biomarkers for malignancy. MiRNA expression level variations have been identified between normal and neoplastic colorectal tissues. Several lines of evidence from in vitro and nude mice models have shown that anti-cancer “miRNA mimics” inhibit cell proliferation, migration and induce apoptosis in CRC [7,8]. Several miRNAs are indicative of response to chemotherapy [9], and some have also shown prognostic potential in CRC [10]. Then, miRNAs might have a critical clinical significance in diagnosis, treatment and prediction of outcomes in CRC patients.
Our study performed an extensive analysis of miRNA expression profiles in CRC versus normal colon tissue to yield further insights to clarify the molecular mechanisms of oncogenesis in CRC. We experimentally identified, by whole-transcriptome profiling, gene targets for deregulated miRNAs to improve therapeutic strategies in CRC patients.

2.1. Integrated Signature of miRNAs in CRC

The expression levels of 377 miRNAs were acquired in CRC and NCT using TaqMan® Array Human MicroRNA technology (TLDA). The statistical analysis of microarray (SAM) identifies 67 miRNAs (p value < 0.05) differentially expressed between the two categories, which showed a well-defined separation between normal colon and tumor tissues (Figure 1).
Predicted and known targets of all deregulated miRNAs were compared with whole-transcriptome profiles of CRC and NCT, obtained by RNA-Seq (G.P.; P.U. Landscape of transcriptome variations uncovering known and novel driver events in colorectal carcinoma. Sci Rep, under review), to identify miRNAs significantly enriched in anti-expressed targets.
A set of 21 miRNAs was identified (p value < 0.05): 20 were downregulated and only miR-224-5p was found upregulated in CRC (Table S1: List of 21 deregulated miRNAs identified by array and gene targets anti-expressed identified by RNA-Seq).
From this set, nine miRNAs showed a strong differential expression on microarray data (p value < 0.01) (miR-489, miR-139-5p, miR-133a, miR-133b, miR-411-5p, miR-145-5p, miR-150-5p, miR-149-5p, miR-224-5p) and were selected for experimental validation. RT-qPCR confirmed the differential expression data, except for miR-411-5p (Figure 2).
A correlation analysis between the validated eight miRNAs showed significant positive correlation between all miRNAs downregulated in CRC, except for miR-489. Moreover, a strongly negative correlation was seen between miR-224 and 133a (r = 0.52, p < 0.001), miR-224 and miR-139-5p (r = 0.44, p < 0.05), miR-224 and miR-133b (r = 0.34, p < 0.05) (Table 1). The contemporary deregulation of these seven miRNAs in CRC might strongly influence the biology of this tumor.

Clinic-pathological and molecular data of CRC patients are summarized in Table 2. The median (interquartile range, IQR) time of survival was 31.5 (27.5–38.5) months. The anatomical site of the lesion was in the right colon in the majority of the cases (24, 54.6%). More than half of the patients showed advanced stage of the disease (stage III and stage IV: 46.5% and 14%, respectively) and a histologic grade 2 (30, 68.2%). KRAS mutation was found in 38.6% of the cases. The following miRNAs were down-regulated in the majority of the patients: miR-133a, miR-139-5p, miR-133b, miR-149-5p, miR-489, miR-145-5p, miR-150-5p; only miR-224-5p was upregulated.
We summarize the association between CRC patients with variation of expression levels (defined by the fold change (FC) of each tumor) of miR-224-5p and miR-489 and clinic-pathological features of tumors in Table 3. MiR-224-5p overexpression was significantly associated with weak lymph node involvement, conversely it increases the presence of metastasis (85.7%, p value: 0.004 and 91.9%, p value: 0.006, respectively). Low miR-489 expression level was prevalently associated with patients aged >66 years (78.4%; p value: 0.002). No significant association between these miRNA expression levels and the other clinic-pathological features analyzed were found (Table 3).
The logistic regression analysis aimed at evaluating the association between miRNA expression and the selected covariates found a significant relationship between miR-224-5p and tumor stage IV (odds ratio (OR): 0.1; p value: 0.02) (Table 4). A similar analysis did not show statistically significant results for any other miRNA (Table 4).
A Kaplan–Meier survival analysis to evaluate the clinical prognostic significance of deregulated miRNAs in CRC patients showed that the expression of miR-133a, miR133b, miR-145-5p, miR-139-5p, miR-149-5p, miR-489, and miR-150-5p was not related to the difference in patients’ survival (log-rank test; p value: 0.39). Moreover, the miR-224-5p upregulation seems to be associated with poor patients’ survival, although it does not show a significant p value (Figure 4).

We screened more than 100 anonymized and consecutive patients diagnosed with CRC that underwent surgical resection at the Surgery Unit of University of Sassari from June 2014 to December 2015. Forty-seven primary colorectal carcinoma and related NCT were enrolled in the present study. We excluded patients who received neoadjuvant chemo and/or radiotherapy and showed multiple recurrence and/or CRC familiarity. Tissue samples were collected in RNAlater solution and stored at −80 °C. All tumors were critically reviewed and assessed by a pathologist, according to WHO criteria [43]. All clinic-pathological and follow-up data were obtained from medical records. The follow-up started at the time of diagnosis (June 2014–December 2015) and ended on 28 February 2018. Written informed consent was obtained from each patient and the protocol was reviewed and approved by the Azienda Sanitaria Locale Sassari Bioethics Committee (n. 2032/CE, 13/05/2014). The study was conducted in accordance with the code of ethics of the World Medical Association (Declaration of Helsinki).

Total RNA was extracted by neoplastic and non-neoplastic tissues, by homogenizing 100 mg of tissue in 1 mL of QIAzol lysis reagent (QIAGEN, Hilden, Germany) and subsequently by means of miRNeasy Mini Kit (QIAGEN) in accordance with the manufacturer’s instructions, as previously described [44]. The high-throughput miRNA expression profiling was first performed on 8 pairs of CRC and paired NCT from patients with CRC, and these samples became part of the validation cohort. We have used the TaqMan® Array Human MicroRNA Card A set v3.0 (Thermo Fisher Scientific, Waltham, MA, USA), a high throughput PCR-based miRNA array, which enables analysis of 377 miRNA assays present in the miRBase version 18.0. Moreover, the card A contains 3 endogenous controls (MammU6, RUN44, and RUN48) for relative quantization, of which MammU6 was present in 4 replicates while the other 2 controls appeared just once, and an assay unrelated to any mammalian species, ath-miR-159a, as a negative control. The differential expression of significantly deregulated miRNAs (p value < 0.05) was further validated by RT-qPCR in all datasets (47 CRC and 47 NCT) following the procedures described in Uva et al. [44]. MiRNA U6 was used as reference for normalizing miRNA expression. All reactions were performed in triplicate.

The gene targets of CRC related to differentially expressed miRNAs were predicted by 7 algorithms: DianaMicroT_strict [45], miRanda-mirSVR_S_C [46], MirTarget2 [47], picTar_chicken [48], PITA_Top [49], starBase [50] and TargetScan_v6.2 [51]. Experimentally validated targets were identified by literature and/or from miRecords [52] and mirTarBase v4.5 [53] databases. Comparisons of gene targets lists were performed with custom scripts using the computing environment R [54]. Targets predicted by at least 1 of the 7 algorithms or experimentally validated (i.e., reported in at least 1 database or in literature) were selected for subsequent analysis.
Predicted miRNA targets were then compared with the transcriptional profiles of CRC and NCT samples obtained by Next Generation Sequencing experiments [11], searching for significant overlaps between predicted targets of miRNA and mRNA whose expression was the opposite of that of miRNAs. The mRNAs with inverse expression were defined as anti-expressed. A hypergeometric test was applied for statistical evaluation of the significance of the overlap.
To inspect the function of the differentially expressed miRNAs, the gene targets were submitted to Gene Ontology and KEGG pathway enrichment analysis using ToppCluster [55]. Terms with false discovery rate (FDR)-corrected enrichment p values <0.05 were considered. ToppCluster results were displayed using Cytoscape [56].

Relative miRNA expression was calculated using the comparative cycle threshold (2−ΔΔCt) method [57]. Ct values were normalized using the quantile normalization method. An unsupervised hierarchical clustering, using Pearson’s correlation as distance measure and average linkage as agglomerative algorithm, was used to assess which samples clustered together based on their expression profiles. miRNAs with statistically significant changes in expression were identified by SAM analysis [58]. Differences with FDR-corrected p value <0.05 were retained as statistically significant. The analyses were performed in R using the samr package for differential expression analysis [54]. To estimate the relationships between miRNA expression levels the Pearson’s correlation coefficient was calculated by R software.
An ad hoc electronic form (Excel, Microsoft) was used to collect demographic, epidemiologic, molecular, and clinical variables. Qualitative and quantitative variables were summarized with absolute and relative (percentage) frequencies and medians following their non-parametric distribution. The selected variables were evaluated in those patients with down- and upregulation of miR-224-5p, as well as in those with down- and upregulation of miR-489. Qualitative variables were evaluated with the chi-squared or Fisher exact test, when appropriate; quantitative variables were compared with the Mann–Whitney test. Logistic regression analyses were carried out to assess the relationship between the above-mentioned variables and the upregulation of miR-224-5p and miR-489. Survival analysis was performed for assessing the time-to-death of CRC patients with a down-regulation of all miRNA in CRC compared to NCT. Survival curves were estimated by the Kaplan–Meier method and the difference between the curves was evaluated by Log-Rank test (Mantel–Cox). The analyses were performed using STATA v15 (STATA Corp., College Station, TX, USA). For all statistical tests, p values <0.05 were considered significant.

The present study identified an integrated signature of 20 deregulated miRNAs in CRC patients, showing a strong positive or negative miRNA–miRNA correlation based on expression levels. We believe that the biology and progression of CRC could depend on deregulation of multiple miRNAs which determine a complex dysfunction of cellular molecular networks. We experimentally identified gene targets for each deregulated miRNA, bringing to light 25 genes operating as members of pathways known to lead to cell growth and death, as well as cell metabolism. Although these genes are known to relate to the pathogenesis of CRC, our results further established their epigenetic mechanism of control and defined the multiple pathways involved. These miRNA integrated signatures and gene targets could be evaluated as potential prognostic biomarkers and/or therapeutic targets.

All authors would like to thank the CRS4 HPC group for IT support and computational infrastructure. 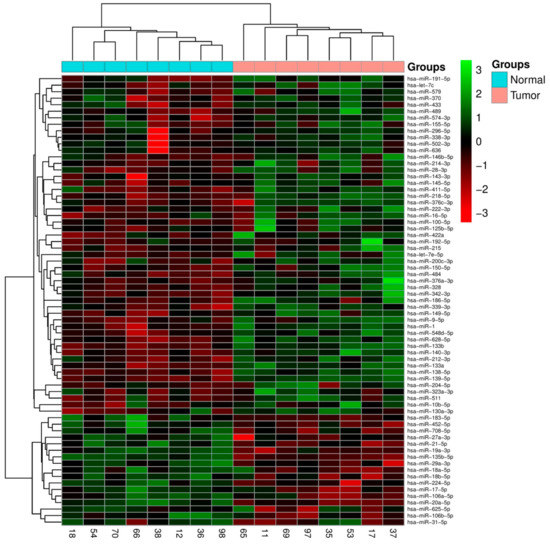 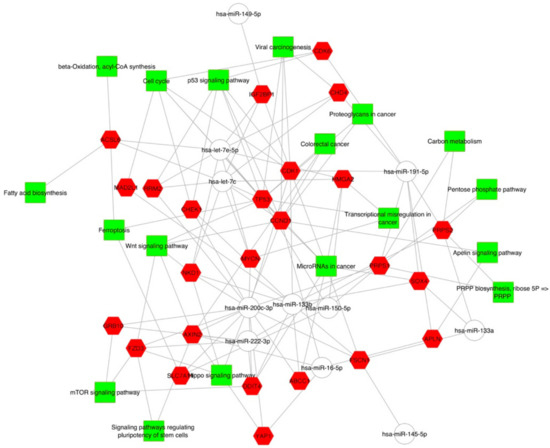 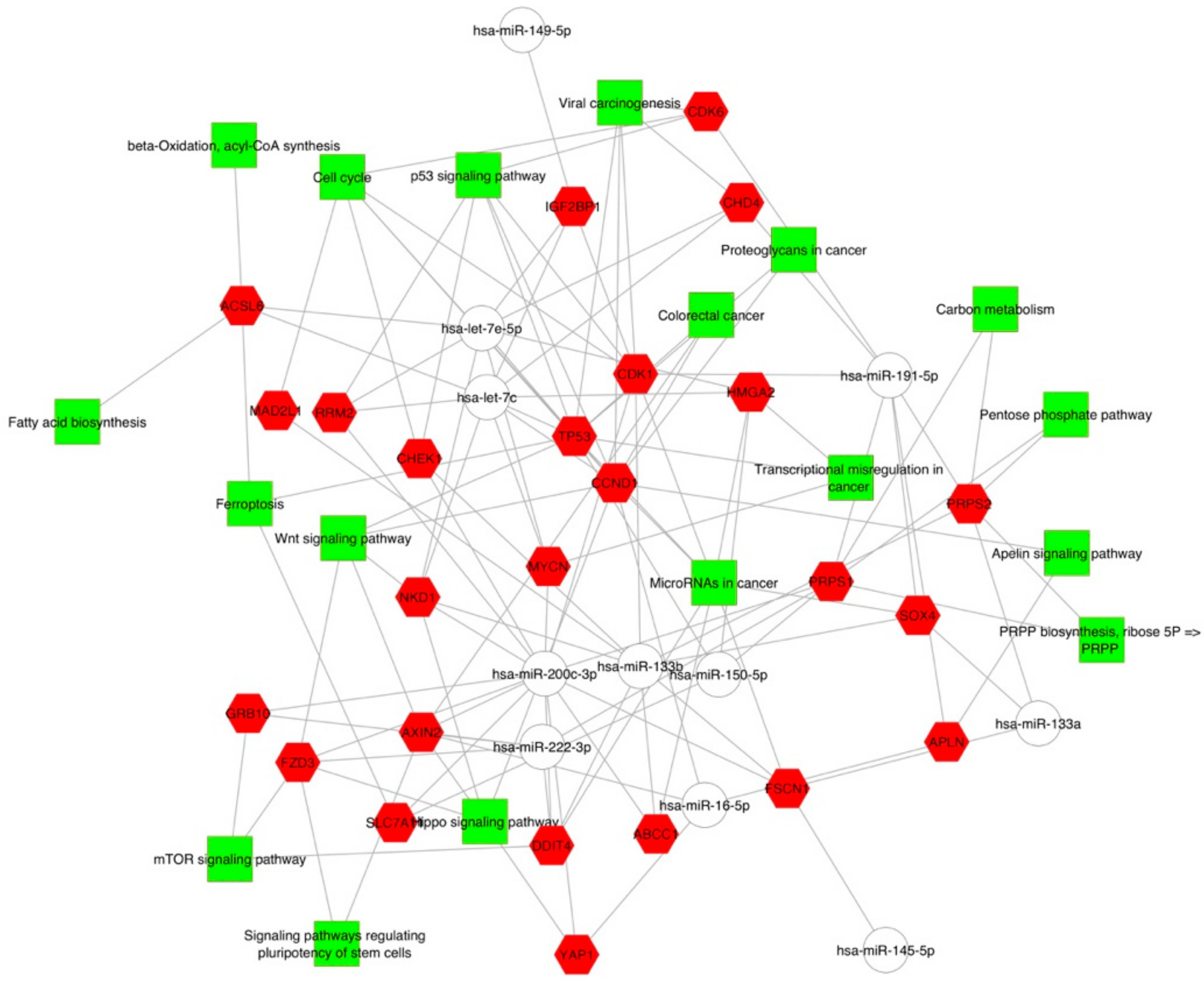 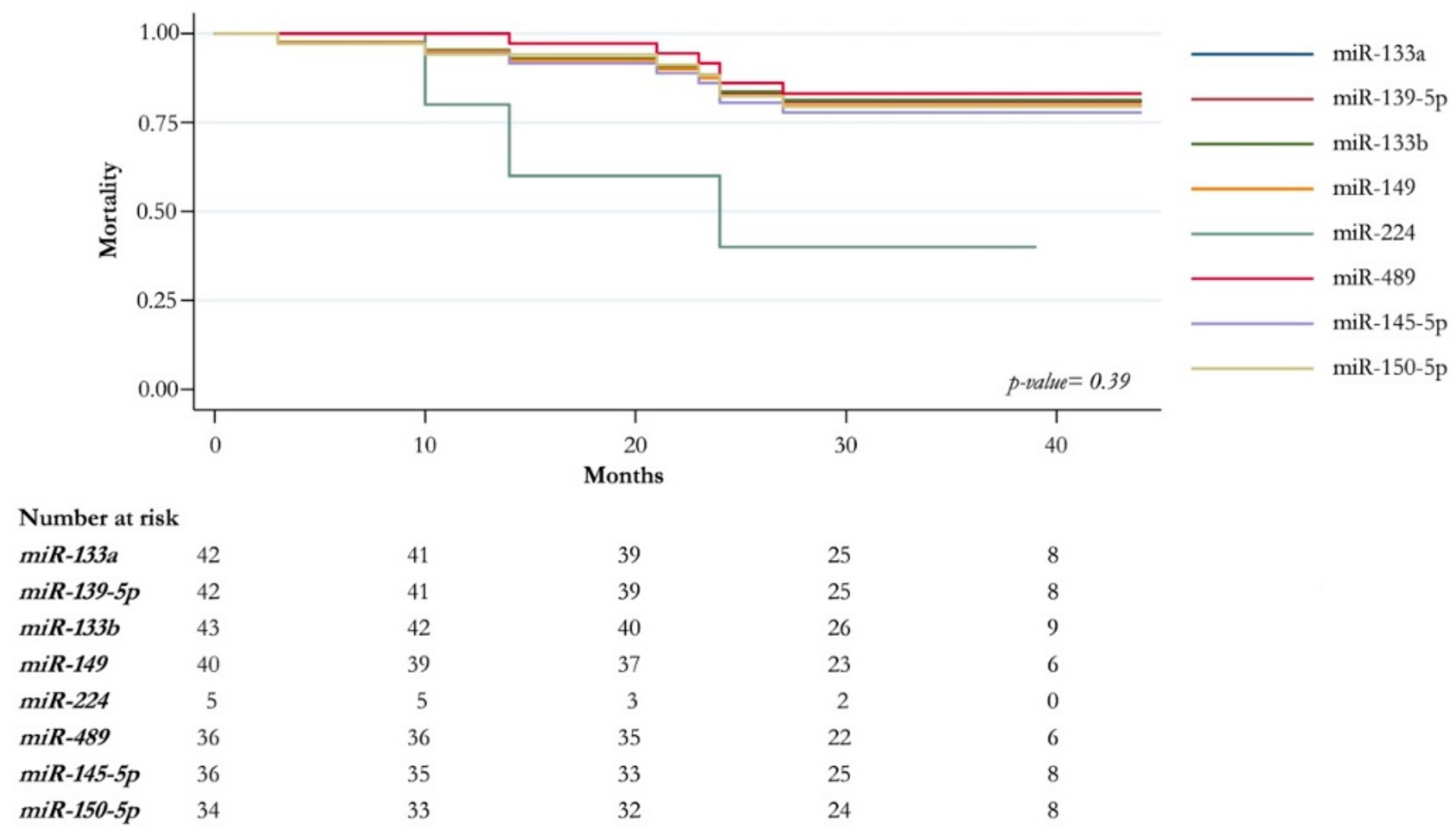