Linagliptin is a representative of dipeptidyl peptidase 4 (DPP-4) inhibitors which are registered and used effectively in a treatment of diabetes mellitus type 2. They increase the levels of active forms of endogenous incretins such as GLP-1 and GIP by inhibiting their enzymatic decomposition. Scientific reports suggest beneficial effects of linagliptin administration via immunological and biochemical pathways involved in neuroprotective processes of CNS. Linagliptin’s administration leads to a decrease in the concentration of proinflammatory factors such as: TNF-α, IL-6 and increases the number of anti-inflammatory patrolling monocytes CX3CR1bright. Significant reduction in Aβ42 level has been associated with the use of linagliptin implying potential application in Alzheimer’s disease. Linagliptin improved vascular functions by increasing production of nitric oxide (NO) and limiting concentration of apolipoprotein B. Linagliptin-induced decrease in macrophages infiltration may provide improvement in atheromatous plaque stabilization. Premedication with linagliptin increases neuron’s survival after stroke and augments neuronal stem cells proliferation. It seems to be connected with SDF-1α/CXCR4 signaling pathway. Linagliptin prevented abnormal proliferation and migration of rat brain microvascular endothelial cells in a state of hypoperfusion via SIRT1/HIF-1α/VEGF pathway. The article presents a summary of the studies assessing neuroprotective properties of linagliptin with special emphasis on cerebral ischemia, vascular dysfunction and neurodegenerative diseases.
Keywords: linagliptin; inflammation; pathways; neurodegeneration; pharmacology linagliptin; inflammation; pathways; neurodegeneration; pharmacology

A high percentage of the population struggling with cardiovascular diseases imply a substantial need for new therapeutic methods. Ischemic heart disease and stroke are currently the two most common causes of death worldwide, killing over 15 million people annually [1,2]. The great extent of the problem prompts researchers to seek new properties among medicines already registered in order to optimize treatment. Recent experimental studies indicate that DPP-4 (Dipeptidyl peptidase 4) inhibitor called linagliptin may possess neuroprotective properties. A summary of studies reviewed is presented in the Table 1. DPP-4 inhibitors are registered for treatment of diabetes mellitus type 2. They slow down enzymatic degradation of endogenous incretins such as GLP-1 (Glucagon-like peptide-1) and GIP (Gastric inhibitors polypeptide) and prolong their action. GLP-1 and GIP inhibit the secretion of glucagon from pancreatic alpha cells and reduce gluconeogenesis in the liver. They support the biosynthesis of insulin and its release from pancreatic beta cells. Moreover, incretins reduce the absorption of glucose and delay gastric emptying, which increases the time of satiety and promotes the restriction of food intake [3,4,5]. Above-mentioned antihyperglycemic properties lead to a reduction in fasting blood glucose, postprandial glycemia and HbA1c plasma levels [6,7].
Linagliptin (8-[(3R)-3-aminopiperidin-1-yl]-7-but-2-ynyl-3-methyl-1-[(4-methylquinazolin-2-yl) methyl]purine-2,6-dione) is rapidly absorbed after oral administration and reaches/achieves maximum plasma concentration after approximately 90 min. The absolute bioavailability of 10 mg linagliptin tablet was estimated to be about 30% [8]. Accumulation half-life is only 10 h with 5 mg dosing. Unlike the other DPP-4 inhibitors, 85% of the drug is eliminated unchanged in the feces and only 5% is metabolized by the kidneys and excreted in urine so it can be safely used in patients with kidney diseases [9]. Food intake does not appear to have a relevant influence on linagliptin’s pharmacokinetics [10]. There are no requirements for dose adjustment on the basis of age, sex or weight or due to liver or renal dysfunction [8]. Linagliptin is a weak inhibitor and a weak substrate for CYP3A4 (Cytochrome P450 3A4), but no clinically significant interactions with other drugs have been demonstrated [9].

Many diseases of the cardiovascular and central nervous system are associated with the presence of inflammation. Acute ischemic event leads to elevation of inflammatory markers concentration such as IL-6 (interleukin 6), CRP (C-reactive protein) and TNF-α (tumor necrosis factor- α) [27]. Monocytes, the precursors of macrophages, are crucial modulators of inflammation in the acute phase of stroke. The activated monocytes have been defined as either classic (M1) or alternative (M2). More precisely, M1 type secretes pro-inflammatory cytokines (TNFα, IL-1β, IL-6, IL-12, IL-23) and exacerbates neuronal injury, whereas the M2 type releases anti-inflammatory agents (TGF-β, IL-4, IL-10, IL-13) and growth factors such as VEGF (vascular endothelial growth factor), BDNF (brain-derived neurotrophic factor) and PDGF (platelet-derived growth factor) which suppresses inflammation, and promotes tissue recovery [28,29,30,31]. Yamadera et al. (2018) in their in vitro study demonstrated a reduction of LPS-induced (lipopolysaccharide) inflammation after linagliptin administration. The production of IL-6 and TNF-α by pro-inflammatory monocytes was significantly reduced in relation to the control sample [32]. Increased levels of IL-6 and TNF-α in both CSF (cerebrospinal fluid) and serum have been associated with deterioration of neurological functions, increased infarct size and poor functional outcome [16,33,34]. Nakamura et al. focused on the assessment of inflammatory parameters of endothelial cells of the umbilical vein exposed to LPS. Linagliptin significantly reduced IL-6 production, p65 expression (member of family NF-κB) and p38 MAPK (mitogen-activated protein kinase) phosphorylation [25]. In 2016, they expanded the spectrum of research with further biochemical parameters such as: ROS/Cu, Zn superoxide dismutase (SOD) index, adenosine 3′,5′-cyclic monophosphate (cAMP) level, protein kinase A (PKA), protein kinase B (PKB) and protein kinase C (PKC) ratio [14]. The ROS/Cu SOD index was determined as an indicator of oxidative stress. Elevated cAMP level induces PKA activation via inhibiting the phosphodiesterase. PKA inhibits MAPK phosphorylation and the subsequent activation of p38. MAPK is involved in maintenaning synaptic plasticity, whereas the elevation of cAMP level concomitantly suppresses NF-κB (nuclear factor kappa B) signaling which is considered to be a prototypical proinflammatory pathway [15,35,36]. Activated PKB and PKC mediate inflammatory responses. Linagliptin has been shown to reduce phosphorylation of PKB in LPS-exposed endothelial cells, however parameters such as: cAMP level, the activity of PKA and surprisingly PKC remained elevated. Dai et al. (2014) demonstrated that two other DPP-4 inhibitors, sitagliptin and vildagliptin limited inflammation response by inhibiting phosphorylation of PKC [37]. Similar effects were expected after the use of linagliptin. Results of Nakamura et al. [15] suggest that PKC may not be involved in the anti-inflammatory effects of linagliptin. It would be interesting to test the other DPP-4 inhibitors in the context of inflammation induced by PKC.
Apart from inhibiting proinflammatory monocytes differentiation, linagliptin was shown to promote the growth of anti-inflammatory cell populations, i.e., non-classic patrolling monocytes. It is a group of phagocytic cells (CX3CR1high, CCR2neg, Ly6Clow in mouse, CD14low CD16+ in human) able to migrate along the vascular endothelium. Fadini et al. (2016) demonstrated that 4-day linagliptin supplementation in type 2 diabetic patients leads to a significant increase in plasma patrolling monocytes CX3CR1bright compared to placebo [38]. It has been observed that the patrolling cell may exhibit neuroprotective abilities. In response to bacterial infection patrolling monocytes produced a small quantity of pro-inflammatory cytokines, but significant amounts of anti-inflammatory and healing agents such as IL-1 receptor antagonist, IL-10R, apolipoprotein A (ApoA), apolipoprotein E (ApoE), and CXCL16 (C-X-C motif chemokine ligand 16) [39]. They were proved to be effective in preventing excitotoxity and death of nerve cells as well as in maintaining the integrity of BBB (blood–brain barrier) [40,41].
The endothelial lining can be viewed as the first line of defense between risk factors and vascular disease. This single layer of vascular cells plays a key role in controlling blood hemostasis [42,43]. It is responsible for the synthesis of major vasodilators such as prostaglandins, nitric oxide (NO) and endothelium-derived hyperpolarizing factor (EDHF), as well as endothelin vasoconstrictors (ET) and angiotensin II. After the initiation of inflammatory response, endothelium releases large amounts of ROS. In moderate concentrations they have an important signaling function. It is also well-known that their overproduction is detrimental to the body [44]. Many systemic diseases such as diabetes or arterial hypertension are connected with excessive ROS creation and subsequent vascular injury [45]. Risk factors of atherosclerosis such as hyperlipidemia, diabetes mellitus, hypertension, and cigarette smoking are related to the damaged endothelium. Although, the pathomechanisms are multifactorial, the crucial one is the dysfunction of eNOS/NO pathway that includes the decrease in activity and expression of eNOS (endothelial nitric oxide synthase) and reduced NO sensitivity [46,47].
Nitric oxide is mainly produced from L-arginine by eNOS. NO protects against ischemic stroke by increasing blood flow in the hypoperfusion areas of the brain and in case of the incident, prompts angiogenesis. NO has also been shown to retard the process of SMCs migration from the media to the neointima during atherosclerotic plaque formation [48,49]. Systemic diseases such as diabetes impair NO-dependent muscle relaxation and endothelium dependent hyperpolarization (EDH). They intensify the expression of Nox2, which takes part in the pathogenesis of atherosclerosis and reduces eNOS dimerization [17,50]. Linagliptin seems to promote the normalization of these pathological phenomena. Numerous independent studies proved linagliptin’s influence on NO production and subsequent oxidative stress limitation [17,51,52]. Salheen et al. (2015)dowiedli, że linagliptyna działa protekcyjnie na śródbłonek tętnic krezkowych u szczurów z cukrzycą typu 1 niezależnie od GLP-1/GLP-1R.(2015) demonstrated that linagliptin has a protective effect on the mesenteric artery endothelium of rats with type 1 diabetes mellitus. The effect did not appear to be connected with GLP-1/GLP-1R signaling. Vellecco et al. (2016) potwierdzili, że linagliptyna wpływa na modulacje eNOS niezależnie od GLP-1.(2016) confirmed that linagliptin affects eNOS modulations independently of GLP-1. Badania molekularne komórek śródbłonka dowiodły, że przez blokowanie wiązania eNOS/ caveolin-1 (CAV-1) zwiększa ona dostępność eNOS, co skutkujewzmożonąprodukcją NO [53]. Molecular studies in endothelial cells have shown that linagliptin increases the availability of eNOS by blocking the binding of eNOS and caveolin-1 (CAV-1) leading to enhanced NO production [17].

Reviewed studies allow for the consideration that the effects of linagliptin are beyond glycemic control. Presented findings introduce linagliptin as a promising drug in the treatment of DM2 patients with vascular and neurological disorders. If DPP-4 inhibitors are demonstrated to have clinically meaningful anti-sclerotic activity in humans, one potential application may be to reduce the burden of certain neurodegenerative disorders. The moderation of ROS production and aggregation of β-amyloid may prove to be helpful in AD, stroke and changes related to chronic hyperglycemia of the central nervous system. Most of the studies were conducted on cell lines and animal models, so validation of presented mechanisms requires a multidimensional verification regarding both the dosage of the drug and its effect in humans. Due to many methodological limitations of the above-mentioned studies, it is essential to perform more randomized and double-blind placebo-controlled clinical trials to prove the clinical utility of linagliptin in the discussed conditions.

The present work was supported by the Department of Pharmacology and Therapeutics, Faculty of Medicine, Collegium Medicum in Bydgoszcz, Nicolaus Copernicus University, Toruń, Poland. 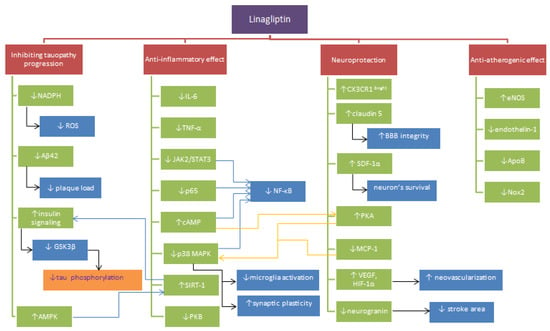 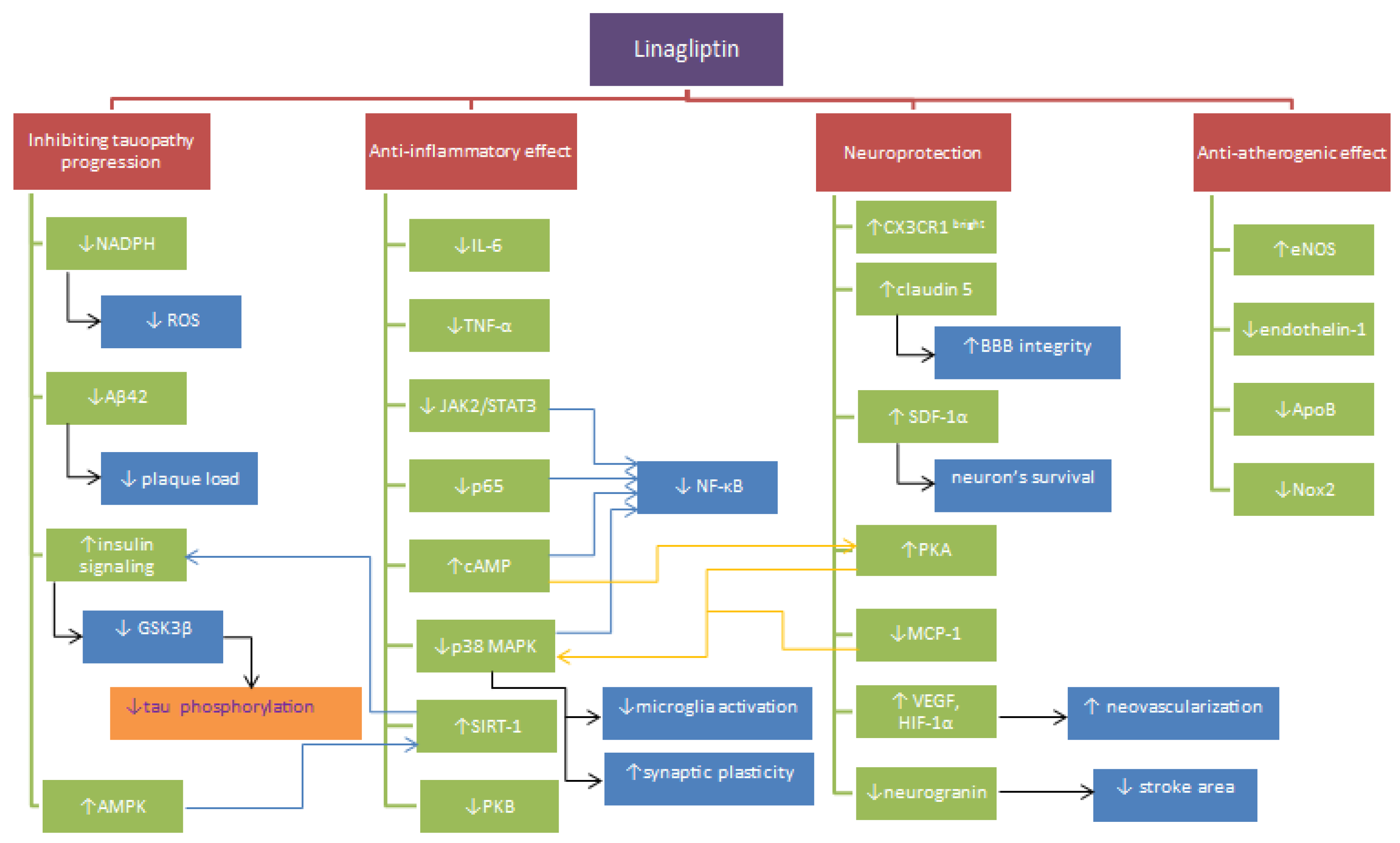