Stem Cells from a Female Rat Model of Type 2 Diabetes/Obesity and Stress Urinary Incontinence Are Damaged by In Vitro Exposure to its Dyslipidemic Serum, Predicting Inadequate Repair Capacity In Vivo
Next Article in Special Issue

In order to survive and/or proliferate under changing and stressful conditions, different organisms have evolved elaborate mechanisms for gene control [1,2,3]. To rapidly optimize their gene expression profiles, eukaryotes complement slower nucleus-based transcription-level reactions with cytoplasmic control of messenger(m)RNAs translation into proteins and dynamically alter the composition of the proteome [4]. This allows for a rapid response to stresses and can often initiate a longer-term transcriptional reprogramming, to change gene expression profiles more permanently [5,6]. Another important reason to rapidly alter the rates of protein production is that translation is one of the most nutrient and energy-costly processes for most cells [7,8]. Thus, failure to quickly adjust protein synthesis levels may lead to an inability to produce proteins critical for ongoing homeostasis [9,10].
Yeast cells are known to respond at the level of translation to a multitude of environmental stresses, such as heat shock [11,12], nutrient deprivation [13,14,15], general amino acid balance [16,17,18,19], phosphate [20], sulfur [21,22], nitrogen [23,24] content and other environmental conditions [25,26], such as growth at low/high temperatures [27], in different oxygen levels [28,29,30] or in the presence of heavy metals, during desiccation [31,32,33], etc. Many of these conditions are studied in the context of industrial applications of yeast in bread baking and alcohol fermentation [34,35,36,37,38].
Of all nutrients, d-glucose (‘glucose’) is by far the most important, and the favorite carbon and energy source in use by Saccharomyces cerevisiae (hereinafter ‘yeast’ unless indicated otherwise) [39]. Glucose starvation causes a rapid, but also rapidly reversible, inhibition of translation in yeast by mechanisms that are surprisingly not as well elucidated as some other nutrient responses [40,41]. Several groups have tested the time (duration of starvation) and the reduction in amount (concentration) of glucose needed to induce this rapid effect in experiments at various stages of yeast culture growth, e.g., References [40,42,43,44] (see Table 1 and Figure 1 for summary and Table 2, Table 3, Table 4 and Table 5 and Figure 2 and Figure 3 for more detail). They used approaches such as polyribosome (polysome) complex separation by centrifugation through a sucrose gradient (polysome profiling), high-throughput sequencing of ribosome-protected mRNA fragments (ribosome profiling) and immunoprecipitation of RNA-protein complexes. When glucose levels decreased below 0.6% (w/v), an acute inhibition of translation was observed as indicated by the decrease in cytosolic polysome content and a concomitant increase in single ribosomes (monosomes), an effect which can be reversed within minutes (min) by re-supplementation of glucose [40,42]. Another prominent reaction to glucose depletion is an (often selective) inclusion of mRNA into a variety of cytoplasmic foci or granules, often through ‘phase separation’ effects [45,46,47,48], whereby the mRNA becomes generally translationally repressed and may also be degraded [49,50,51,52,53,54] (Table 5 and Figure 4).
The importance of glucose and the physiological or pathophysiological responses to its levels, however, extend beyond yeast to other eukaryotes, with a considerable degree of conservation [65,66]. Translational responses to glucose starvation are an integral part of mammalian metabolic control and become critical under physical stress (exercise) and in diseases, such as diabetes or cancer [67,68]. Using the wealth of data for glucose starvation responses in yeast, we structure this review to first discuss the translational mechanisms of glucose starvation response as they are elucidated for yeast and then briefly comment on mammalian- or higher-eukaryote-specific pathways in a comparative fashion. We then summarize glucose starvation responses leading to mRNA inclusion into cytoplasmic granules.

6. Formation of Cytoplasmic Foci and the Fate of Inhibited mRNA

We thank the members of the RNA Biology Group and Department of Genome Sciences, The John Curtin School of Medical Research, for critically discussing the manuscript. We are very grateful to Prof Christopher Proud for thought-stimulating and critical discussions, which helped improving the manuscript. 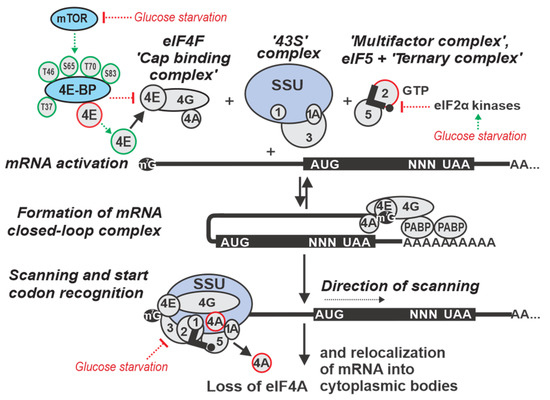 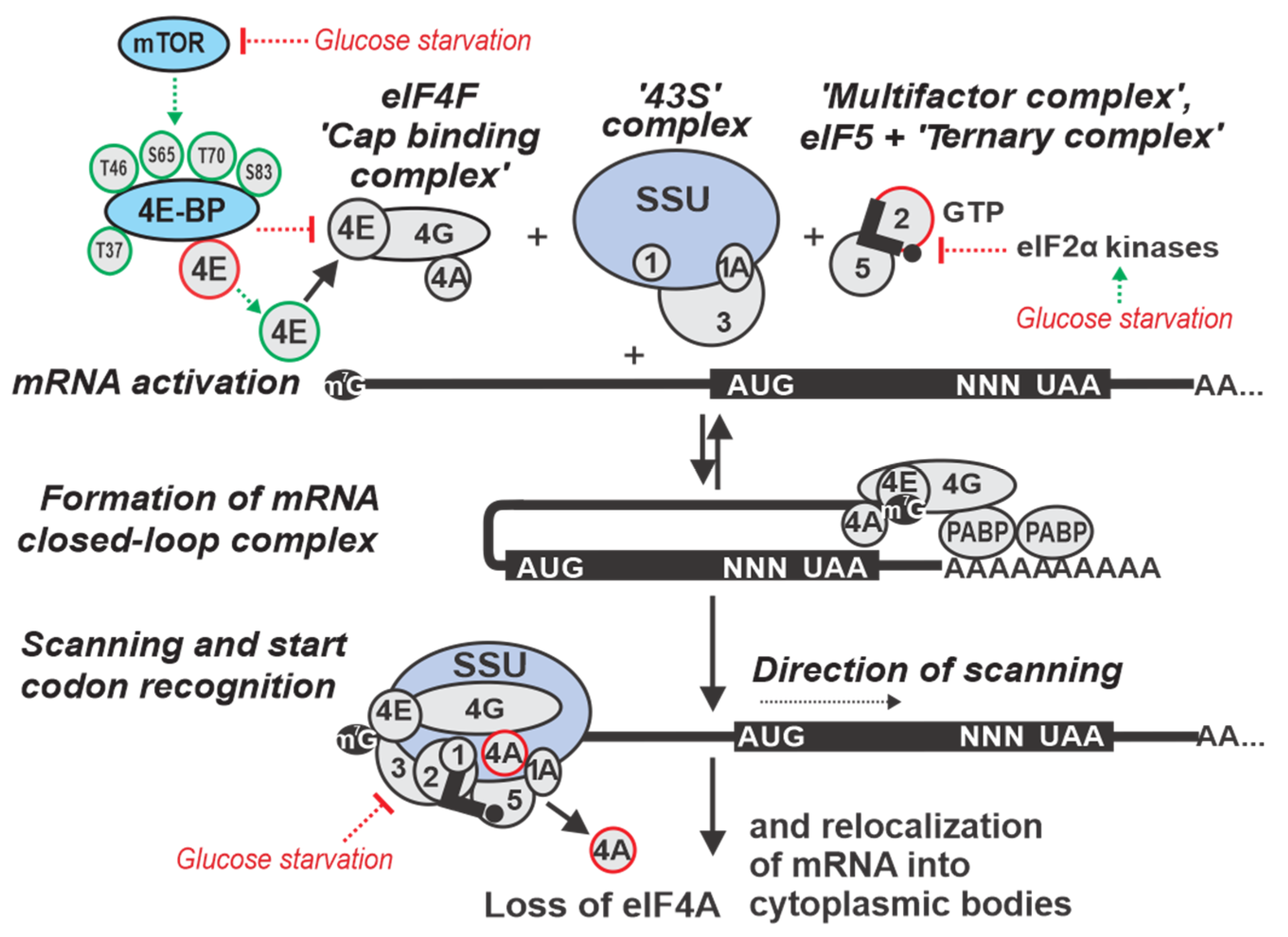 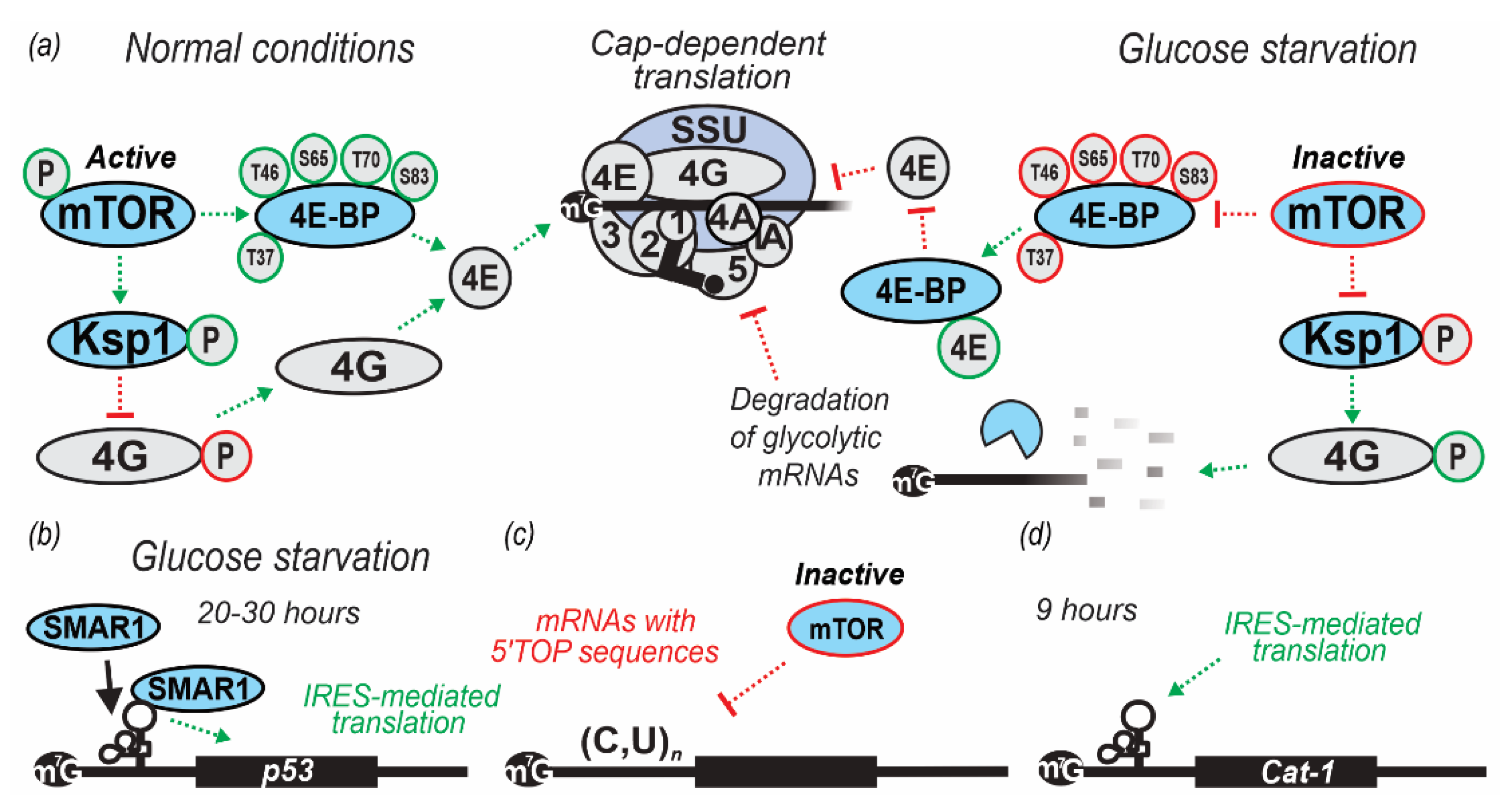 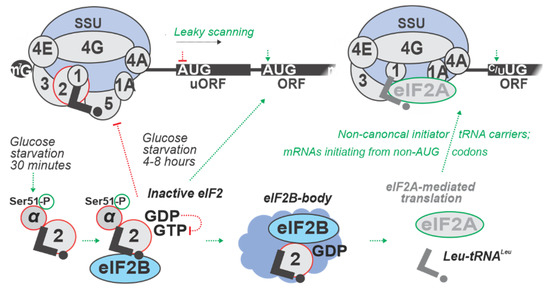 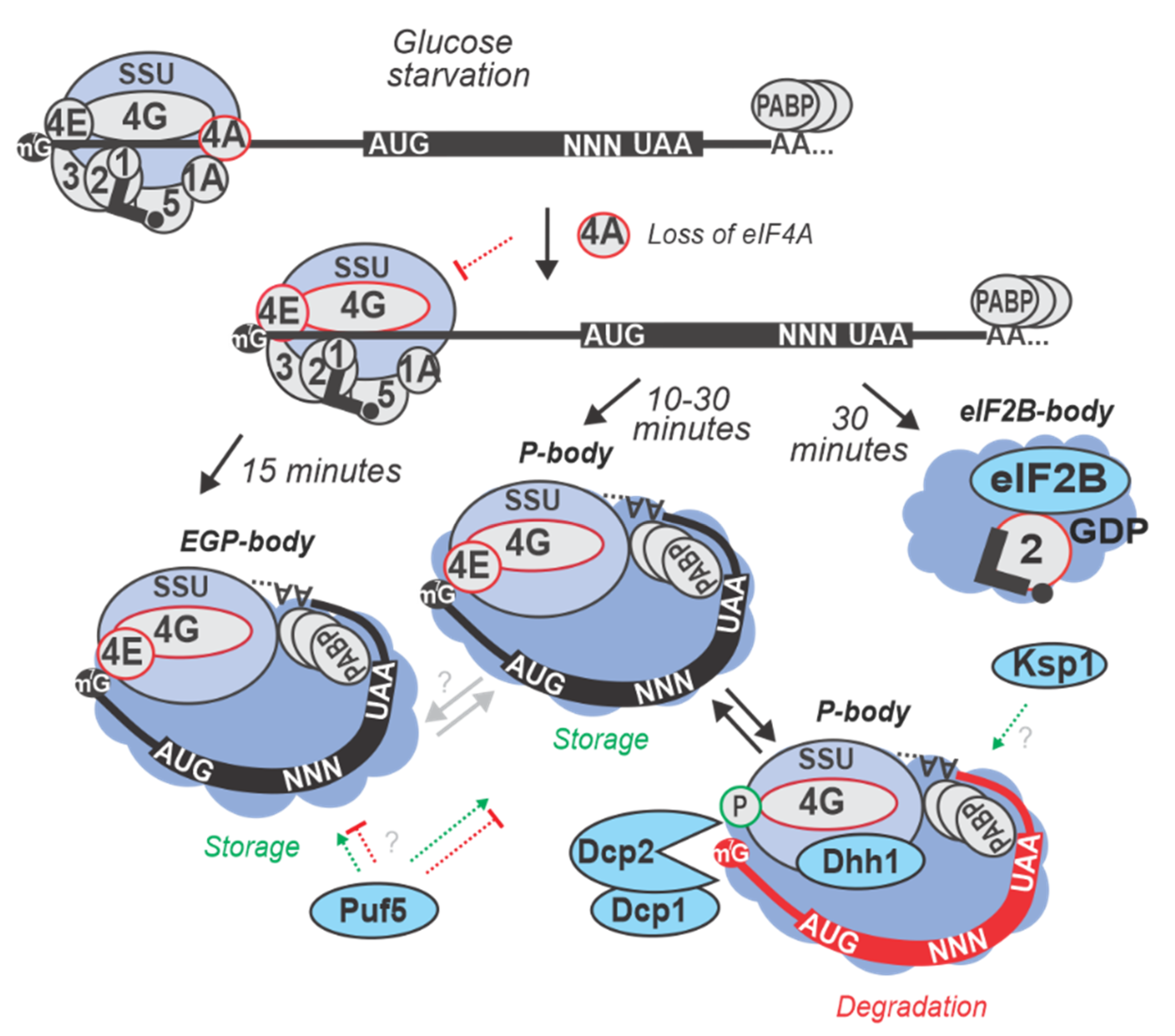