The Protective Effect of Insulin on Rat Cortical Neurons in Oxidative Stress and Its Dependence on the Modulation of Akt, GSK-3beta, ERK1/2, and AMPK Activities
Previous Article in Journal

Checkpoint kinase 1 (CHK1) is a central mediator of the DNA damage response (DDR) at the S and G2/M cell cycle checkpoints, and plays a crucial role in preserving genomic integrity. CHK1 overexpression is thought to contribute to cancer aggressiveness, and several selective inhibitors of this kinase are in clinical development for various cancers, including neuroblastoma (NB). Here, we examined the sensitivity of MYCN-amplified NB cell lines to the CHK1 inhibitor PF-477736 and explored mechanisms to increase its efficacy. PF-477736 treatment of two sensitive NB cell lines, SMS-SAN and CHP134, increased the expression of two pro-apoptotic proteins, BAX and PUMA, providing a mechanism for the effect of the CHK1 inhibitor. In contrast, in NB-39-nu and SK-N-BE cell lines, PF-477736 induced DNA double-strand breaks and activated the ataxia telangiectasia mutated serine/threonine kinase (ATM)-p53-p21 axis of the DDR pathway, which rendered the cells relatively insensitive to the antiproliferative effects of the CHK1 inhibitor. Interestingly, combined treatment with PF-477736 and the ATM inhibitor Ku55933 overcame the insensitivity of NB-39-nu and SK-N-BE cells to CHK1 inhibition and induced mitotic cell death. Similarly, co-treatment with PF-477736 and NU7441, a pharmacological inhibitor of DNA-PK, which is also essential for the DDR pathway, rendered the cells sensitive to CHK1 inhibition. Taken together, our results suggest that synthetic lethality between inhibitors of CHK1 and the DDR drives G2/M checkpoint abrogation and could be a novel potential therapeutic strategy for NB. View Full-Text
Keywords: CHK1; ATM; DNA-PK; neuroblastoma; checkpoint abrogation CHK1; ATM; DNA-PK; neuroblastoma; checkpoint abrogation
►▼ Show Figures 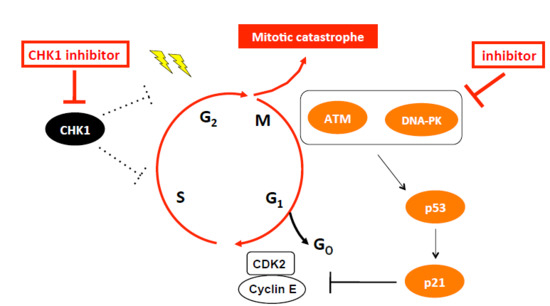