Posttranscriptional Regulation of RhBRC1 (Rosa hybrida BRANCHED1) in Response to Sugars is Mediated via its Own 3′ Untranslated Region, with a Potential Role of RhPUF4 (Pumilio RNA-Binding Protein Family)
Previous Article in Journal

CRISPR/Cas9 has become one of the most promising techniques for genome editing in plants and works very well in poplars with an Agrobacterium-mediated transformation system. We selected twelve genes, including SOC1, FUL, and their paralogous genes, four NFP-like genes and TOZ19 for three different research topics. The gRNAs were designed for editing, and, together with a constitutively expressed Cas9 nuclease, transferred either into the poplar hybrid Populus × canescens or into P. tremula. The regenerated lines showed different types of editing and revealed several homozygous editing events which are of special interest in perennial species because of limited back-cross ability. Through a time series, we could show that despite the constitutive expression of the Cas9 nuclease, no secondary editing of the target region occurred. Thus, constitutive Cas9 expression does not seem to pose any risk to additional editing events. Based on various criteria, we obtained evidence for a relationship between the structure of gRNA and the efficiency of gene editing. In particular, the GC content, purine residues in the gRNA end, and the free accessibility of the seed region seemed to be highly important for genome editing in poplars. Based on our findings on nine different poplar genes, efficient gRNAs can be designed for future efficient editing applications in poplars. View Full-Text
Keywords: gRNA; homozygous editing; Populus; secondary structure; sequencing; transformation gRNA; homozygous editing; Populus; secondary structure; sequencing; transformation
►▼ Show Figures 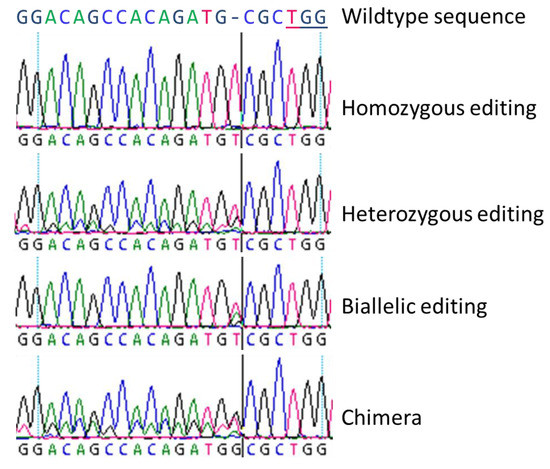