Potential Benefits of Nobiletin, A Citrus Flavonoid, against Alzheimer’s Disease and Parkinson’s Disease

Alzheimer’s disease (AD), which is characterized by the presence of amyloid-β (Aβ) plaques and neurofibrillary tangles, accompanied by neurodegeneration, is the most common form of age-related neurodegenerative disease. Parkinson’s disease (PD) is the second most common neurodegenerative disease after AD, and is characterized by early prominent loss of dopaminergic neurons in the substantia nigra pars compacta. As currently available treatments are not able to significantly alter the progression of these diseases, successful therapeutic and preventive interventions are strongly needed. In the course of our survey of substances from natural resources having anti-dementia and neuroprotective activity, we found nobiletin, a polymethoxylated flavone from the peel of Citrus depressa. Nobiletin improved cognitive deficits and the pathological features of AD, such as Aβ pathology, hyperphosphorylation of tau, and oxidative stress, in animal models of AD. In addition, nobiletin improved motor and cognitive deficits in PD animal models. These observations suggest that nobiletin has the potential to become a novel drug for the treatment and prevention of neurodegenerative diseases such as AD and PD. View Full-Text
Keywords: nobiletin; Alzheimer’s disease; Parkinson’s disease; neuroprotection nobiletin; Alzheimer’s disease; Parkinson’s disease; neuroprotection
►▼ Show Figures 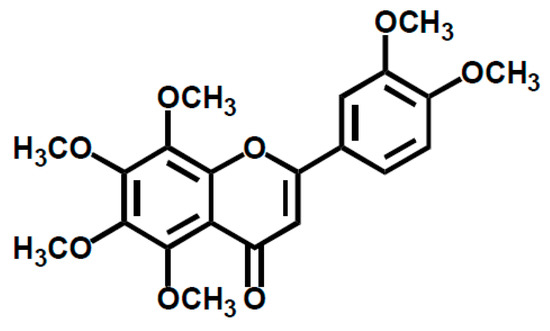