The global spread of bacterial resistance to antibiotics promotes a search for alternative approaches to eradication of pathogenic bacteria. One alternative is using photosensitizers for inhibition of Gram-positive and Gram-negative bacteria under illumination. Due to low penetration of visible light into tissues, applications of photosensitizers are currently limited to treatment of superficial local infections. Excitation of photosensitizers in the dark can be applied to overcome this problem. In the present work, dark antibacterial activity of the photosensitizer Rose Bengal alone and in combination with antibiotics was studied. The minimum inhibitory concentrations (MIC) value of Rose Bengal against S. aureus dropped in the presence of sub-MIC concentrations of ciprofloxacin, levofloxacin, methicillin, and gentamicin. Free Rose Bengal at sub-MIC concentrations can be excited in the dark by ultrasound at 38 kHz. Rose Bengal immobilized onto silicon showed good antibacterial activity in the dark under ultrasonic activation, probably because of Rose Bengal leaching from the polymer during the treatment. Exposure of bacteria to Rose Bengal in the dark under irradiation by electromagnetic radio frequency waves in the 9 to 12 GHz range caused a decrease in the bacterial concentration, presumably due to resonant absorption of electromagnetic energy, its transformation into heat and subsequent excitation of Rose Bengal.
Keywords: Rose Bengal; S. aureus; ultrasonic excitation; radio wave activation; silicon; immobilization Rose Bengal; S. aureus; ultrasonic excitation; radio wave activation; silicon; immobilization

The global growth and spread of bacterial resistance to antibiotics obligates a search for new approaches to eradication of pathogenic bacteria. Photodynamic antimicrobial chemotherapy (PACT) shows very promising prospects for becoming an alternative to antibiotic treatment. PACT is based on the activation of photosensitizers (PSs), which are compounds with a developed system of conjugated double bonds. Illumination of PSs by visible light leads to energy transfer from the excited PS molecules to dissolved molecular oxygen. This leads to the formation of reactive oxygen species, which cause irreversible damage to the bacterial cells that ends in the cells’ death [1,2,3,4]. PACT is known as a powerful means for killing Gram-positive and Gram-negative bacteria when applied alone or in combination with antibiotics [5,6,7,8,9,10,11]. However, due to low penetration of visible light into tissues, its applications are currently limited to treatment of superficial local infections [12]. Various methods of PS excitation in the dark can be applied in order to overcome this problem. In our previous works we showed that PSs can be activated by chemiluminescent light generated by a chemiluminescent reaction of luminol in the absence of external illumination [13,14,15]. This method was shown to be efficient against Gram-positive S. aureus and Gram-negative E. coli when methylene blue was used as the PS. An alternative approach to eradication of bacteria by PSs in the dark is based on their activation by ultrasound. We [16] and others [17,18,19,20] demonstrated that microbial cells can be inactivated by PSs under 20–40 kHz ultrasonic treatment. Ultrasonic activation exhibits good prospects for treatment of inner infections, since ultrasound can be focused on the required site, thus activating only PS molecules found in the infected region. In this case the PS molecules actually act as sonosensitizers.
Immobilization of PSs onto a solid phase pushes the boundaries of PS application, including their continuous use and reuse. It was reported that PSs can be immobilized onto carriers such as polystyrene [21,22], polycarbonate, poly(methyl methacrylate) [22], polyethylene, and polypropylene [23]. In all of these cases, immobilized PSs showed high antibacterial activity under illumination by an external source of visible light. Activation of immobilized PSs in the dark can be performed by ultrasonic treatment.
Another way to activate PSs in the dark may be by implementation of nonionizing radio frequency electromagnetic waves. It was recently reported that radio waves at a frequency of 27 MHz can be applied for activation of Si-based nanosensitizers [24]. Transferrin [25] and fullerene [26] were proposed for treatment of cancer, when the radiosensitizers were activated at a frequency of 13.56 MHz. To the best of our knowledge, sensitization of PSs by radio waves and their antibacterial application has not been reported to date.
In our work we studied antibacterial properties of Rose Bengal, which is known as an efficient antibacterial PS. Rose Bengal is a water-soluble PS with a characteristic purplish-red color and an absorbance spectrum with λmax at 546 nm [27]. The structural formula of Rose Bengal is presented at Figure 1.
The high efficiency of Rose Bengal against bacteria under illumination is well-known [11,28,29,30]. The aims of the present work are to study the dark antibacterial activity of Rose Bengal alone and when combined with antibiotics, to test excitation of free and immobilized Rose Bengal by ultrasound and to examine possible Rose Bengal activation by radio waves in the dark for further application against internal infections.

3.2. Immobilization of Rose Bengal onto Silicon

One gram of polymerization component A (milky transparent silicon RTVI, A-42) was placed in a beaker and 0.125 g of component B (solidifier—Silicon RTVI, B-42) were added to the same beaker. Immediately after addition of component B, 0.05 g of Rose Bengal was added and the viscous solution was mixed carefully with a glass stick for 1 min, placed in a Petri plate, and left overnight at room temperature to obtain, after polymerization, a round silicon rubber with approximately 1 cm thickness.
The obtained dry silicon rubber was washed 3 times with 70% aqueous ethanol in order to remove remains of Rose Bengal which were not captured inside the silicone. It was then cut into 1 cm diameter circles which were ready for use in further experiments.

S. aureus bacteria were grown as described in [27]. In brief, cultures of S. aureus were grown on BHA, then transferred into BH, grown overnight at 37 °C and shaking at a 170 rpm and diluted with the Antibiotic medium 3 or BH to obtain an OD600 = 0.1, which corresponded to an initial cell concentration of 108 CFU/mL. The obtained cell suspension was used for further experiments.

3.4. Examination of Dark Rose Bengal Activity in the Presence of Antibiotics

The MIC of the antibiotics ciprofloxacin hydrochloride, levofloxacin, gentamicin sulfate and methicillin were determined by a standard broth double dilutions procedure [48]. In brief, the antibiotic in 2 mL of antibiotic medium was distributed by a double dilution method into a series of tubes. The microbial suspension was then added to the tubes to a final concentration of 106 CFU/mL. The tubes were incubated for 24 h at 37 °C under dark conditions, and their turbidity was checked. The antibiotic concentration in the last transparent tube in the series, which corresponded to the minimal antibiotic concentration inhibiting bacterial growth, was defined as the MIC value.

3.4.2. MIC Determination of Rose Bengal in the Presence of Sub-MIC Antibiotic Concentrations

Bacteria were grown as described in Section 3.3 to a concentration of 108 CFU/mL and then diluted with sterile saline by serial decimal dilutions to concentrations of 103–107 CFU/mL. Three milliliters of bacterial suspensions was transferred into flat-bottom 2.5 cm diameter 20 mL vials. Before the experiment, samples were taken from each vial to determine the initial bacterial concentration. Free Rose Bengal at various concentrations or Rose Bengal immobilized onto silicone (one 1-cm circle, Section 3.2, per vial) was added to all vials, except for the controls. After adding Rose Bengal, all subsequent procedures were performed under dark conditions. Vials with bacterial suspensions with or without Rose Bengal were held tight to the bottom of an ultrasonic bath in a plastic holder VU03H (SMEG, Italy) and treated by ultrasound at a frequency of 38 kHz and a field strength of 4.1 W/cm3 for 1 to 10 min as described in [16]. After the treatment, 100 µL samples were diluted by several decimal dilutions and were spread over BHA plates with a Drigalsky spreader. The plates were incubated at 37 °C overnight and the bacterial cell concentration was determined taking dilutions into account using the viable count method, where CFU were counted by means of a colony counter Scan 500 (Interscience, Saint Nom la Bretèche, France). In control experiments, bacterial cultures were tested in the absence of Rose Bengal without sonication, in the absence of Rose Bengal under sonication and in the presence of Rose Bengal without sonication.

Bacteria were grown as described in Section 3.5 and then diluted with sterile saline to 104 CFU/mL. Ten milliliters of the bacterial suspension was distributed into 15 mL test tubes. One-hundred microliters portions of the Rose Bengal stock solution (1 mg/mL) were added to the tubes to obtain a concentration of 0.01 mg/mL. After adding Rose Bengal, all subsequent procedures were performed under dark conditions. The tubes were exposed to radio waves of various frequencies for half an hour, using a radiation system based on the N5173B EXG Analog Signal Generator (Keysight Technologies, CA, USA). The variable frequency oscillator was tuned within a range of frequencies from 1 up to 20 GHz and produced a radio frequency power of 40 mW (16 dBm) fed to a broadband horn antenna JXTXLB-10180 (A-info) gaining a directivity of 11 dBi (typ). In the range of 9 to 12 GHz, a pyramidal horn antenna with a rectangular cross section and a directivity of 15 dBi was used. The radiation intensity irradiating the tube was 1.8 mW/cm2. At the end of the experiments, bacterial concentration was determined by live count as described in Section 3.5. In control experiments, bacterial cultures were tested in the presence and absence of Rose Bengal without exposure to radio frequency waves and in the absence of Rose Bengal under exposure to radio waves.

The results obtained from at least three independent experiments carried out in duplicates were analyzed by single-factor ANOVA analyses. The difference between the results was considered significant when the p-value was less than 0.05. Quantitative results are presented as the mean ± standard error.

Rose Bengal possesses dark antibacterial activity which is enhanced upon combination with antibiotics. The MIC value of Rose Bengal against S. aureus drops in the presence of sub-MIC concentrations of ciprofloxacin hydrochloride, levofloxacin, methicillin, and gentamicin sulfate. Free Rose Bengal at sub-MIC concentrations can be excited in the dark by ultrasound at 38 kHz. Rose Bengal immobilized onto silicon shows good antibacterial activity in the dark under ultrasonic activation, probably because of Rose Bengal leaching from the polymer during the treatment. Exposure of bacteria to electromagnetic radio frequency waves in the 9 to 12 GHz range in the presence of Rose Bengal in the dark caused a decrease in the bacterial concentration, presumably due to resonant absorption of electromagnetic energy, its transformation into heat and subsequent excitation of Rose Bengal. Excitation of Rose Bengal in the dark mediated by ultrasound and radio waves may result in possible practical applications for curing internal infections at sites where visible light cannot permeate.

This research was supported by the Research Authority of the Ariel University, Israel and by the Cherna Moskowitz Foundation, California, USA.

We acknowledge the Research Authorities of the Ariel University and the Cherna Moskowitz Foundation for supporting this study. 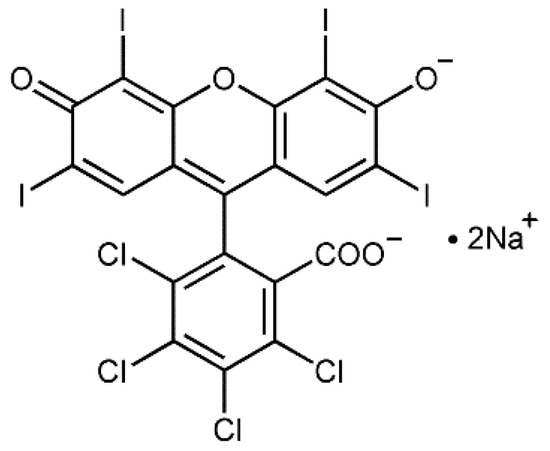 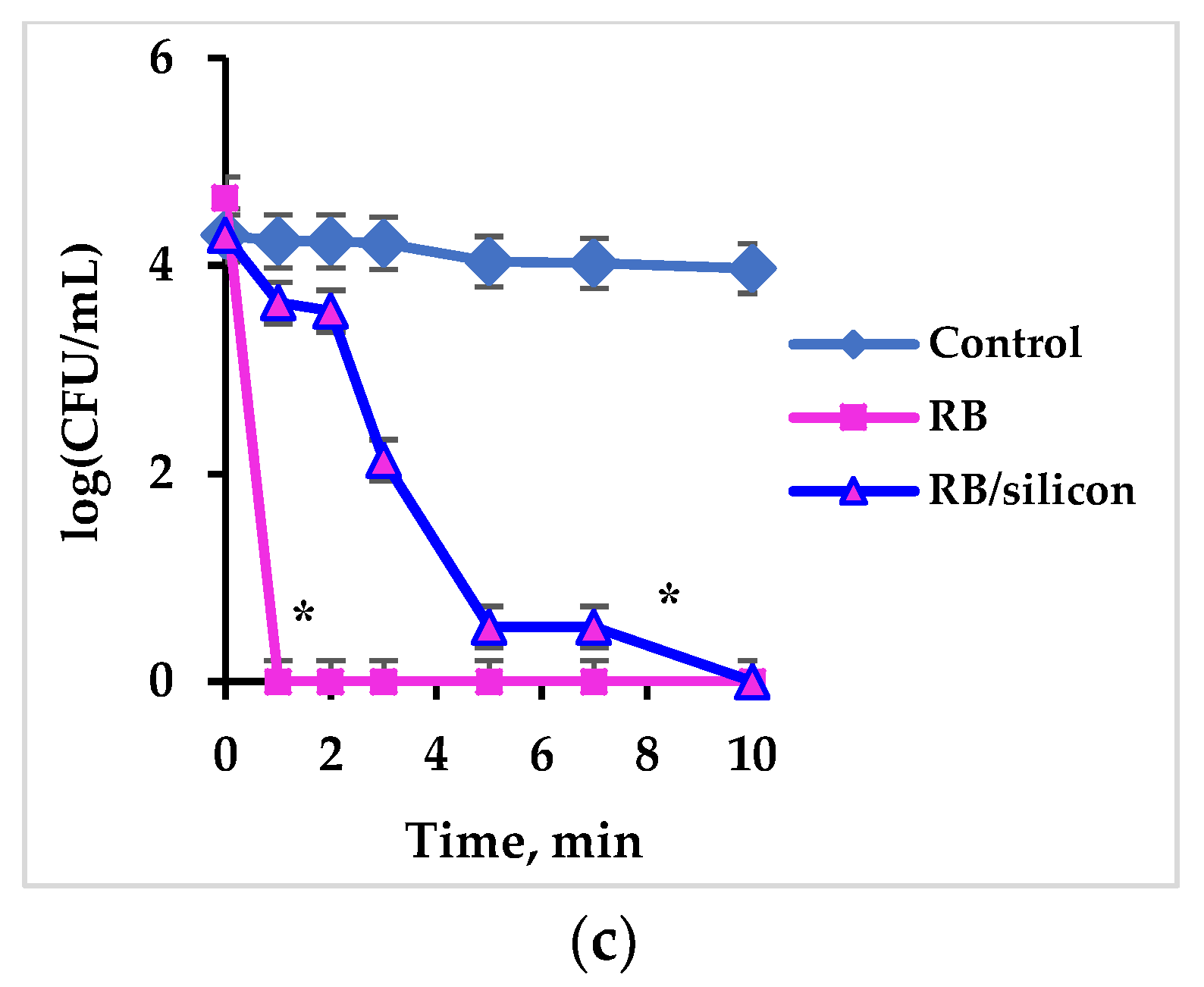 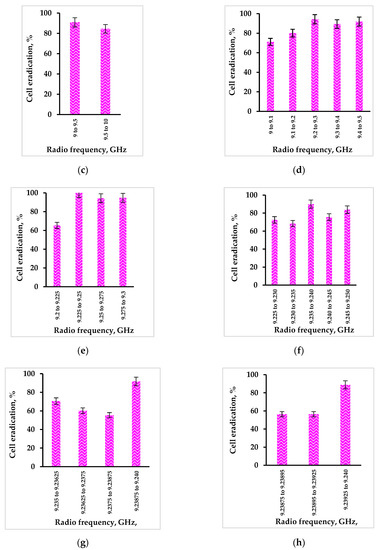