Characterization of the Copper Transporters from Lotus spp. and Their Involvement under Flooding Conditions

We investigated protein profiles specific to vascular lesions mimicking Kaposi sarcoma (KS), based on stepwise morphogenesis progression of KS. We surveyed 26 tumor-associated proteins in 130 cases, comprising 39 benign vascular lesions (BG), 14 hemangioendotheliomas (HE), 37 KS, and 40 angiosarcomas (AS), by immunohistochemistry. The dominant proteins in KS were HHV8, lymphatic markers, Rb, phosphorylated Rb, VEGF, and galectin-3. Aberrant expression of p53, inactivation of cell cycle inhibitors, loss of beta-catenin, and increased VEGFR1 were more frequent in AS. HE had the lowest Ki-67 index, and the inactivation rates of cell cycle inhibitors in HE were between those of AS and BG/KS. Protein expression patterns in BG and KS were similar. Clustering analysis showed that the 130 cases were divided into three clusters: AS-rich, BG-rich, and KS-rich clusters. The AS-rich cluster was characterized by high caveolin-1 positivity, abnormal p53, high Ki-67 index, and inactivated p27. The KS-rich cluster shared the features of KS, and the BG-rich group had high positive expression rates of galectin-3 and low bcl2 expression. In conclusion, although the rate was different, AS and HE tended to have less cell cycle marker expression than KS, and features of BG and activated KS cell signaling were similar. View Full-Text
Keywords: Kaposi sarcoma; angiosarcoma; hemangioendothelioma; hemangioma Kaposi sarcoma; angiosarcoma; hemangioendothelioma; hemangioma
►▼ Show Figures 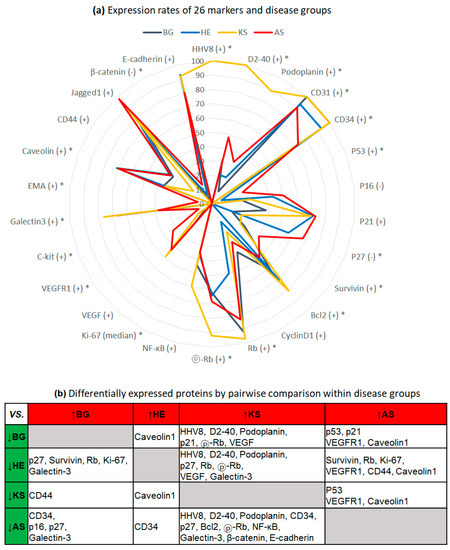