Epigenetics: A Potential Mechanism Involved in the Pathogenesis of Various Adverse Consequences of Obstructive Sleep Apnea
Next Article in Special Issue

Background: Observational studies support an association between periodontitis (PD) and atherosclerotic vascular disease, but little is known specifically about peripheral arterial occlusive disease (PAOD). Objectives: To systematically review the evidence for an association between PD and PAOD. Data Sources: Medline via PubMed. Review Methods: We searched the Pubmed database for original studies, case reports, case series, meta-analyses and systematic reviews that assessed whether there is an association between PD (all degrees of severity) and PAOD (all degrees of severity). The reporting of this systematic review was in accordance with the Preferred Reporting Items for Systematic Reviews and Meta-Analyses (PRISMA) statement following the Population, Intervention, Control, and Outcome (PICO) format. Results: 17 out of 755 detected studies were included in the qualitative synthesis. Nine studies demonstrated associations between PD and PAOD, and two studies reported associations between tooth loss and PAOD. Six studies addressed the pathomechanism regarding PD as a possible trigger for PAOD. No study that dismissed an association could be detected. Odds ratios or hazard ratios ranged from 1.3 to 3.9 in four large cohort studies after adjusting for established cardiovascular risk factors. Conclusions: The presented evidence supports a link between PD and PAOD. Further studies which address the temporality of PD and PAOD and randomized controlled intervention trials examining the causal impact of PD on PAOD are needed. Although our results cannot confirm a causal role of PD in the development of PAOD, it is likely that PD is associated with PAOD and plays a contributing role. View Full-Text
Keywords: oral disease; periodontitis; PD; peripheral arterial occlusive disease; PAOD; systematic review oral disease; periodontitis; PD; peripheral arterial occlusive disease; PAOD; systematic review
►▼ Show Figures 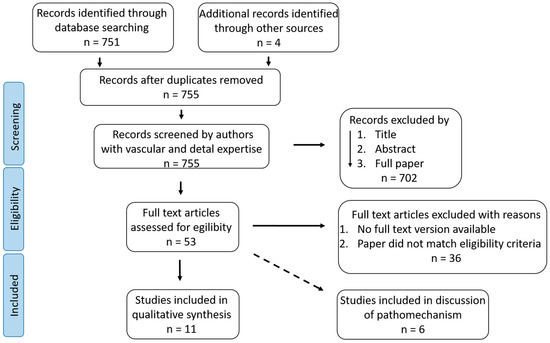