Micronuclei are biomarkers of genotoxic effects and chromosomal instability. They are formed when chromosome fragments or whole chromosomes fail to disjoin into daughter nuclei. We present qualitative and quantitative analyses of the involvement of specific chromosome regions of chromosomes Bd4 and Bd5 in the formation of micronuclei of Brachypodium distachyon root tip cells following maleic hydrazide (MH) treatment and X-radiation. This is visualised by cytomolecular approaches using bacterial artificial chromosome (BAC)-based multicolour fluorescence in situ hybridisation (mcFISH) in combination with 5S and 25S rDNA probes. The results showed that the long arm of submetacentric chromosome Bd4 forms micronuclei at twice the frequency of its short arm, suggesting that the former is more prone to double-strand breaks (DSBs). In contrast, no difference was observed in the frequency of micronuclei derived from the long and short arms of submetacentric chromosome Bd5. Interestingly, the proximal region of the short arm of Bd5 is more prone to DSBs than its distal part. This demonstrates that 5S rDNA and 35S rDNA loci are not “hot spots” for DNA breaks after the application of these mutagens. View Full-Text
Keywords: BAC clones; Brachypodium distachyon; chromosome painting; mcFISH; micronuclei; model grass; molecular cytogenetics; mutagens BAC clones; Brachypodium distachyon; chromosome painting; mcFISH; micronuclei; model grass; molecular cytogenetics; mutagens
►▼ Show Figures 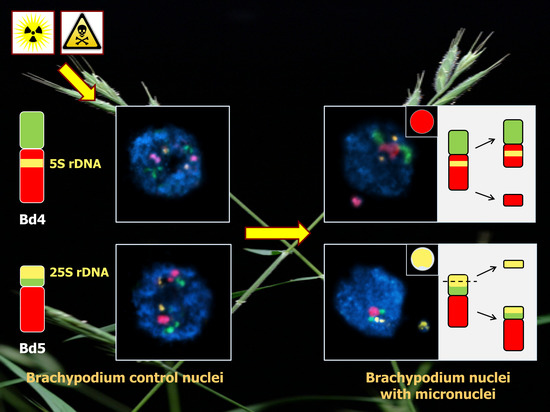