Plants frequently encounter diverse abiotic stresses, one of which is environmental thermal stress. To cope with these stresses, plants have developed a range of mechanisms, including altering the cell wall architecture, which is facilitated by the arabinogalactan proteins (AGP) and extensins (EXT). In order to characterise the localisation of the epitopes of the AGP and EXT, which are induced by the stress connected with a low (4 °C) or a high (40 °C) temperature, in the leaves of Brachypodium distachyon, we performed immunohistochemical analyses using the antibodies that bind to selected AGP (JIM8, JIM13, JIM16, LM2 and MAC207), pectin/AGP (LM6) as well as EXT (JIM11, JIM12 and JIM20). The analyses of the epitopes of the AGP indicated their presence in the phloem and in the inner bundle sheath (JIM8, JIM13, JIM16 and LM2). The JIM16 epitope was less abundant in the leaves from the low or high temperature compared to the control leaves. The LM2 epitope was more abundant in the leaves that had been subjected to the high temperatures. In the case of JIM13 and MAC207, no changes were observed at the different temperatures. The epitopes of the EXT were primarily observed in the mesophyll and xylem cells of the major vascular bundle (JIM11, JIM12 and JIM20) and no correlation was observed between the presence of the epitopes and the temperature stress. We also analysed changes in the level of transcript accumulation of some of the genes encoding EXT, EXT-like receptor kinases and AGP in the response to the temperature stress. In both cases, although we observed the upregulation of the genes encoding AGP in stressed plants, the changes were more pronounced at the high temperature. Similar changes were observed in the expression profiles of the EXT and EXT-like receptor kinase genes. Our findings may be relevant for genetic engineering of plants with increased resistance to the temperature stress. View Full-Text
Keywords: arabinogalactan proteins; Brachypodium distachyon; cell wall; extensins; immunohistochemistry; leaf; RT-qPCR; temperature stress arabinogalactan proteins; Brachypodium distachyon; cell wall; extensins; immunohistochemistry; leaf; RT-qPCR; temperature stress
►▼ Show Figures 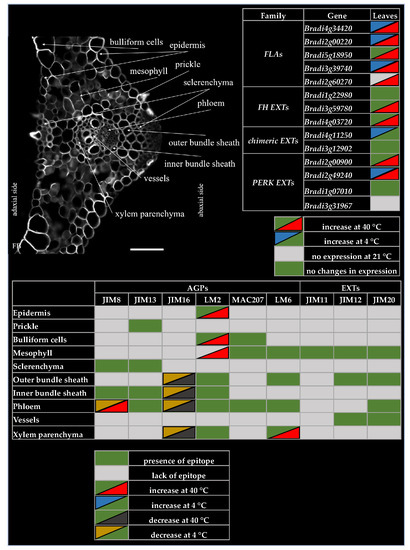