The post-functionalization of 5,10,15-tris(1-methylpyridinium-4-yl)-20-(pentafluorophenyl)porphyrin tri-iodide, known as a highly efficient photosensitizer (PS) for antimicrobial photodynamic therapy (aPDT), in the presence of 3- or 4-mercaptobenzoic acid, afforded two new tricationic porphyrins with adequate carboxylic pending groups to be immobilized on chitosan or titanium oxide. The structural characterization of the newly obtained materials confirmed the success of the porphyrin immobilization on the solid supports. The photophysical properties and the antimicrobial photodynamic efficacy of the non-immobilized porphyrins and of the new conjugates were evaluated. The results showed that the position of the carboxyl group in the mercapto units or the absence of these substituents in the porphyrin core could modulate the action of the photosensitizer towards the bioluminescent Gram-negative Escherichia coli bacterium. The antimicrobial activity was also influenced by the interaction between the photosensitizer and the type of support (chitosan or titanium dioxide). The new cationic porphyrins and some of the materials were shown to be very stable in PBS and effective in the photoinactivation of E. coli bacterium. The physicochemical properties of TiO2 allowed the interaction of the PS with its surface, increasing the absorption profile of TiO2, which enables the use of visible light, inactivating the bacteria more efficiently than the corresponding PS immobilized on chitosan. View Full-Text
Keywords: Photosensitizers; cationic porphyrins; aPDT; immobilization; chitosan; TiO2 Photosensitizers; cationic porphyrins; aPDT; immobilization; chitosan; TiO2
►▼ Show Figures 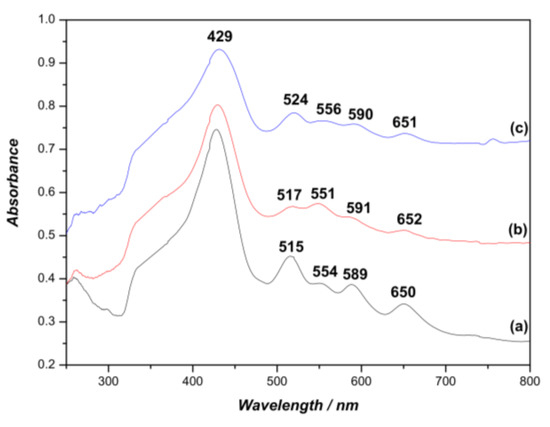