The present study aimed to demonstrate that Sideral® RM (SRM, Sucrosomial® Raw Material Iron) is transported across the excised intestine via a biological mechanism, and to investigate the effect that this transport route may produce on oral iron absorption, which is expected to reduce the gastrointestinal (GI) side effects caused by the bioavailability of non-absorbed iron. Excised rat intestine was exposed to fluorescein isothiocyanate (FITC)-labeled SRM in Ussing chambers followed by confocal laser scanning microscopy to look for the presence of fluorescein-tagged vesicles of the FITC-labeled SRM. To identify FITC-labeled SRM internalizing cells, an immunofluorescence analysis for macrophages and M cells was performed using specific antibodies. Microscopy analysis revealed the presence of fluorescein positive particulate structures in tissues treated with FITC-labeled SRM. These structures do not disintegrate during transit, and concentrate in macrophage cells. Iron bioavailability was assessed by determining the time-course of Fe3+ plasma levels. As references, iron contents in liver, spleen, and bone marrow were determined in healthy rats treated by gavage with SRM or ferric pyrophosphate salt (FP). SRM significantly increased both area under the curve (AUC) and clearance maxima (Cmax) compared to FP, thus increasing iron bioavailability (AUCrel = 1.8). This led to increased iron availability in the bone marrow at 5 h after single dose gavage. View Full-Text
Keywords: iron bioavailability; self-assembled vesicles; sucrester; lecithin; iron storage iron bioavailability; self-assembled vesicles; sucrester; lecithin; iron storage
►▼ Show Figures 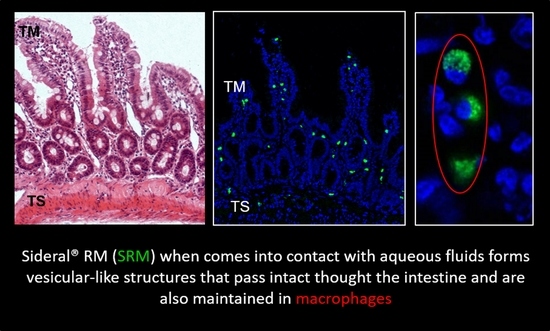