Hypertension is still a global health issue despite recent advances in pharmacotherapies. Hypertension originates from adverse environmental exposures in early life, formally known as the developmental origins of health and disease (DOHaD) [1]. Exposures to environmental chemicals, such as endocrine disrupting chemicals (EDCs), during development can increase the risk of cardiovascular disease later in life [2]. A meta-analysis study of 11 articles reported that EDCs, especially dioxin-related compounds, are associated with the risk of hypertension [3]. In utero exposure to 2,3,7,8-tetrachlorodibenzo-p-dioxin (TCDD), the most toxic member of EDCs, has been reported to increase the vulnerability of offspring to developing hypertension in adulthood [4].
Exposure of the fetus to increased levels of glucocorticoids, resulting from maternal stress or treatment with synthetic glucocorticoids, can cause long-term programmed changes in later life [5]. We previously reported that prenatal exposure to dexamethasone (DEX), a widely used synthetic glucocorticoid, induced programmed hypertension in adult offspring [6,7]. Glucocorticoids have been found to influence the metabolic pathway of TCDD [8]. On the other hand, both glucocorticoids and TCDD can activate the aryl hydrocarbon receptor (AHR) signaling pathway [9,10]. AHR is known to be associated with many different disorders, including hypertension [10]. Progression in the development of hypertension in adulthood can occur with multiple sequential hits. Since each hit induced by prenatal DEX or TCDD exposure may act synergistically to deteriorate programming effects induced by each other, and because DEX and TCDD are closely linked to the AHR pathway, we postulate that maternal TCDD exposure could promote deleterious effects on prenatal DEX-induced renal programming and hypertension in adult offspring via the mediation of the AHR pathway in this two-hit model.
The kidney is a major organ responsible for blood pressure (BP) control. The developing kidney is vulnerable to adverse early-life environments, which causes long-term morphological and functional changes, namely in renal programming [11]. Some particular mechanisms, such as nitric oxide (NO) deficiency, oxidative stress, and activation of the renin–angiotensin system (RAS), have been studied in terms of renal programming [11,12,13]. Notably, that AHR pathway has been reported to interact with oxidative stress [14] and the RAS [15], two central mechanisms underlying hypertension, to affect BP. However, whether the above-mentioned mechanisms interrelate to induce hypertension of developmental origins in this two-hit model remain unclear.
Under the DOHaD concept, there may be potential for reprogramming strategies aimed at reversing the programming processes, even before the onset of clinical symptoms, and to thereby shift therapeutic interventions from adulthood to early life [16]. Resveratrol, a natural phytoalexin, has therapeutic potential with a wide range of beneficial effects [17]. Our recent reports demonstrated that resveratrol prevents hypertension of developmental origins induced by combined pre- and post-natal high-fat diets [18]. Given that resveratrol is considered as an AHR modulator [19] and an antioxidant, we thus examined whether maternal resveratrol treatment can protect offspring against combined TCDD and DEX exposure-induced hypertension of developmental origins via the regulation of oxidative stress, NO, RAS, and the AHR signaling pathway.

Prenatal DEX or TCDD exposure did not affect the survival of male pups (Table 1). The BW and kidney weight-to-BW ratio were not comparable between the five groups, despite the findings that DEX + TCDD- and DEX + TCDD + R-treated rats had a lower kidney weight compared with vehicle-treated controls. As shown in Figure 1, the systolic blood pressure (SBP) was higher in DEX-treated rats than those in the controls from 10 to 16 weeks of age. After the final dose of TCDD at 2 weeks, the hypertensive effect of TCDD persisted up to 16 weeks in the male offspring. At 16 weeks old, TCDD exposure further increased 13 mmHg of SBP in the DEX + TCDD group compared with that in DEX-treated offspring (Table 1). Resveratrol treatment reduced SBP from 8 to 16 weeks and produced a significant reduction of SBP (~20 mmHg) in DEX + TCDD-exposed male offspring at 16 weeks of age. Similarly, the diastolic BP (DBP) and mean arterial pressure (MAP) of rats exposed to DEX + TCDD was markedly elevated; however, the increases in BP were prevented by maternal resveratrol treatment.

Since nitric oxide (NO) is a vasodilator and asymmetric dimethylarginine (ADMA)-NO imbalance plays a key role in renal programming and programmed hypertension [20], we then examined the ADMA/NO pathway. As shown in Table 2, combined DEX and TCDD exposure caused a significantly increase in plasma ADMA and symmetric dimethylarginine (SDMA) levels, whereas these increases were attenuated by maternal resveratrol therapy. Additionally, the l-arginine-to-ADMA ratio was the same among the five groups.

In order to explore the role of oxidative stress in this two-hit model, we next investigated oxidative stress damage in the kidney by using immunohistochemistry to assay 8-OHdG. The locations of 8-OHdG expression in each renal component are shown in Figure 2A. There were higher expressions of 8-OHdG in the nuclei and cytoplasm of the DEX (120 ± 29 positive cells) and TCDD (126 ± 42 positive cells) groups than in control group (34 ± 9 positive cells). As shown in Figure 2B, there was an even higher 8-OHdG density in the DEX + TCDD group (265 ± 123 positive cells) compared to the controls, which was completely prevented by resveratrol therapy.

2.4. Renal mRNA Expression of Genes in AHR Pathway and RAS

This study was approved by the Institutional Animal Care and Use Committee of the Kaohsiung Chang Gung Memorial Hospital (Permit number: 2017031602, 16 May 2017). Virgin Sprague-Dawley (SD) rats (12–16 weeks old) were obtained from BioLASCO Taiwan Co., Ltd. (Taipei, Taiwan). Animals were maintained in an AAALAC-accredited facility, housed in a 12 h light/12 h dark cycle with ad libitum access to tap water and standard rat chow. Animal care and use was in strict accordance with the recommendations of the Guide for the Care and Use of Laboratory Animals of the National Institutes of Health. Male SD rats were housed with individual females until mating was confirmed by the examination of a vaginal plug. Since hypertension occurs at a higher rate and at an earlier age in males than females [30], only male offspring were selected from each litter and used in subsequent experiments. After their birth, litters were culled to a total of eight pups to standardize the received quantity of milk and maternal pup care. Male offspring were assigned to five groups (n = 7–8 for each group): control, DEX, TCDD, DEX + TCDD, and DEX + TCDD + R.
To construct a prenatal DEX exposure model, dexamethasone (0.1 mg/kg body weight [BW]; Taiwan Biotech Co., Ltd., Taoyuan, Taiwan) or vehicle was intraperitoneally administered to pregnant SD rats from a gestational age of 16 to 22 days [6,7]. Additionally, pregnant dams received TCDD (200 ng/kg BW orally; Sigma-Aldrich, St. Louis, MO, USA) or corn oil vehicle (4 mL/kg BW) on gestational days 14 and 21 and postnatal days 7 and 14 to provide in utero and lactation exposure of pups to the dioxin, respectively. The weekly dose of TCDD used here was based on previous studies because TCDD has a long half-life of ~3 weeks in rats [31,32]. In addition to DEX and TCDD exposure, mother rats in the DEX + TCDD + R group received resveratrol 0.05% in drinking water during the pregnancy and lactation period [33].
BP was measured in conscious rats in weeks 3, 4, 6, 8, 10, 12, 14, and 16 by using an indirect tail-cuff method (BP-2000, Visitech Systems, Inc., Apex, NC, USA) as previously described [7]. To ensure accuracy and reproducibility, the rats were allowed to adapt to restraint and tail-cuff inflation for 1 week prior to the experiment, and measurements were taken in the afternoon each day. Rats were placed on a specimen platform, and their tails were passed through tail cuffs and secured with the tape. Following a 10-min warm-up period, 10 preliminary cycles of tail-cuff inflation were performed to allow the rats to adjust to the inflating cuff. For each rat, five cycles were recorded at each time point. Among them, three stable consecutive measures were taken and averaged. All offspring were killed at 16 weeks of age. Rats were anesthetized using an intraperitoneal injection of ketamine (50 mg/kg) and xylazine (10 mg/kg), then euthanized by an intraperitoneal overdose of pentobarbital. Heparinized blood samples were collected at the end of the study. The kidneys were removed and divided into cortex and medulla and snap frozen at −80 °C for further analysis.

Paraffin-embedded tissues sectioned at-μm thickness were deparaffinized in xylene and rehydrated in a graded ethanol series to phosphate-buffered saline. 8-Hydroxydeoxyguanosine (8-OHdG) is a DNA oxidation product that was measured to assess DNA damage. Following blocking with immunoblock (BIOTnA Biotech., Kaohsiung, Taiwan), the sections were incubated for 2 h at room temperature with an anti-8-OHdG antibody (1:100, JaICA, Shizuoka, Japan). A negative control of identical staining omitting incubation with a primary antibody was used. Immunoreactivity was revealed using the polymer-horseradish peroxidase (HRP) labeling kit (BIOTnA Biotech) and, 3′-diaminobenzidine (DAB) as the chromogen. 8-OHdG-positive cells per microscopic field (×400) in the renal sections were quantitatively analyzed as previously described [34].

The values given in the figures and tables represent the mean ± standard deviation. Statistical analysis was done using one-way ANOVA with Dunnett’s C post hoc test. In all cases, a p-value of 0.0 was considered statistically significant. All analyses were performed using the Statistical Package for the Social Sciences software (SPSS, Chicago, IL, USA). 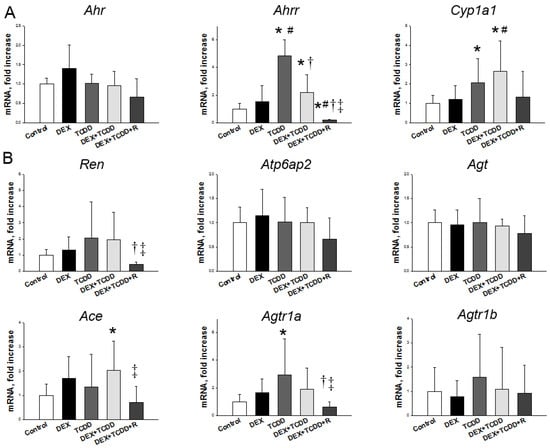 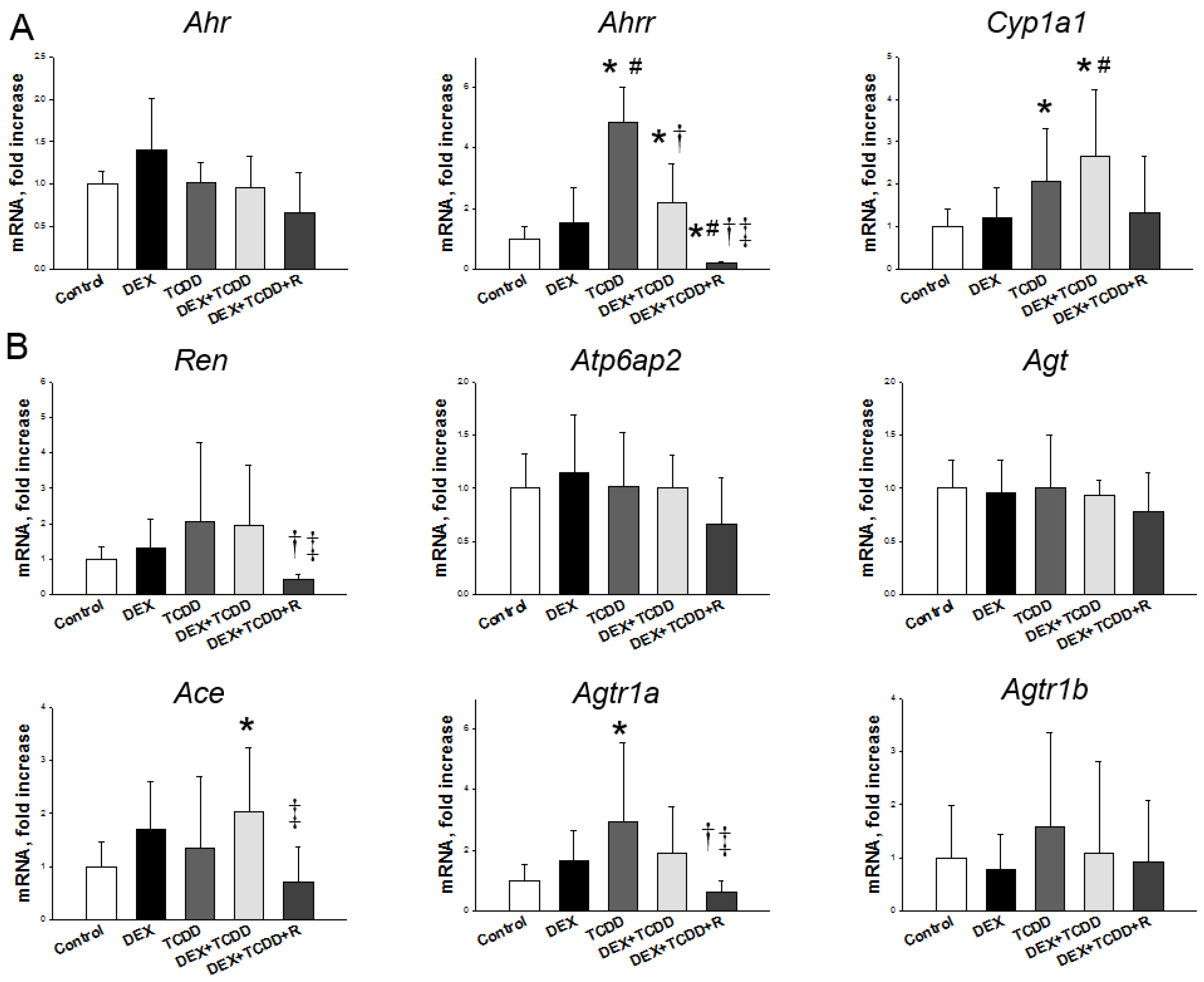 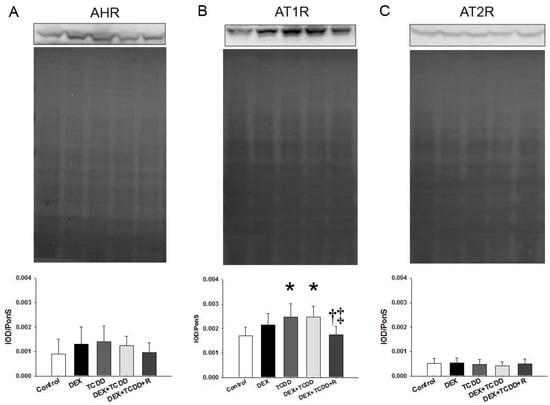