Improving the protection of marginal liver grafts during static cold storage is a major hurdle to increase the donor pool of organs. The endothelium glycocalyx quality of preservation influences future inflammatory and oxidative responses. One cellular pathway responsible for the formation of nitric oxide by endothelial cells is dependent on the stimulation of proteoglycans present in the glycocalyx. We investigated the impact of the glycocalyx preservation in static cold storage of fatty liver preserved in different preservation solutions on the endothelium-mediated production of NO. Zucker fatty rat livers were preserved 24 h in static cold storage in either Institut Georges Lopez-1 (IGL-1) (n = 10), IGL-0 (i.e., without PEG35) (n = 5) or Histidine-Tryptophan-Ketoglutarate (HTK) (n = 10) preservation solutions before being processed for analysis. For Sham group (n = 5), the fatty livers were immediately analyzed after procurement. The level of transaminases and nitrites/nitrates were measured in the washing perfusate. Glycocalyx proteins expressions, Syndecan-1, glypican-1 and heparan sulfate (HS), were determined in the tissue (ELISA). Steatotic livers preserved 24 h in IGL-1 preservation solution have a significant lower level of transaminases (aspartate aminotransferase (AST), alanine aminotransferase (ALT)) and less histological damages than steatotic livers preserved 24 h with HTK (p = 0.0152). The syndecan-1 is significantly better preserved in IGL-1 group compared to HTK (p < 0.0001) and we observed the same tendency compared to IGL-0. No significant differences were observed with glypican-1. HS expression in HTK group was significantly higher compared to the three other groups. HS level in IGL-1 was even lower than IGL-0 (p = 0.0005) which was similar to Sham group. The better protection of the glycocalyx proteins in IGL-1 group was correlated with a higher production of NO than HTK (p = 0.0055) or IGL-0 (p = 0.0433). IGL-1 protective mechanisms through the formation of NO could be due to its better protective effects on the glycocalyx during SCS compared to other preservation solutions. This beneficial effect could involve the preservation state of syndecan-1 and the internalization of HS. View Full-Text
Keywords: glycocalyx; liver; steatosis; cold storage; ischemia; polyethylene glycol glycocalyx; liver; steatosis; cold storage; ischemia; polyethylene glycol
►▼ Show Figures 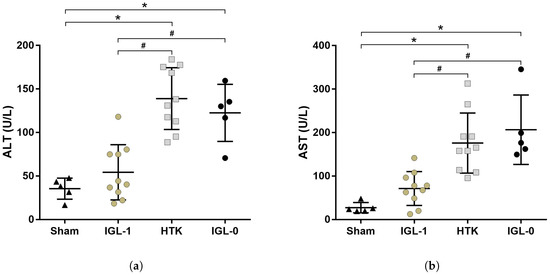