Comparison of the Anion Inhibition Profiles of the α-CA Isoforms (SpiCA1, SpiCA2 and SpiCA3) from the Scleractinian Coral Stylophora pistillata

Carbonic anhydrases (CAs, EC 4.2.1.1) are widespread metalloenzymes used by living organisms to accelerate the CO2 hydration/dehydration reaction at rates dramatically high compared to the uncatalyzed reaction. These enzymes have different isoforms and homologues and can be found in the form of cytoplasmic, secreted or membrane-bound proteins. CAs play a role in numerous physiological processes including biomineralization and symbiosis, as is the case in reef-building corals. Previously, molecular and biochemical data have been obtained at the molecular level in the branching coral Stylophora pistillata for two coral isoforms which differ significantly in their catalytic activity and susceptibility to inhibition with anions and sulfonamides. More recently it has been determined that the genome of S. pistillata encodes for 16 CAs. Here, we cloned, expressed, purified and characterized a novel α-CA, named SpiCA3, which is cytoplasmic and ubiquitously expressed in all the cell layers including the calcifying cells. SpiCA3 is the most effective CA among the coral isoforms investigated and the most efficient catalyst known up to date in Metazoa. We also investigated the inhibition profiles of SpiCA3 and compared it with those obtained for the two other isoforms in the presence of inorganic anions and other small molecules known to interfere with metalloenzymes. These results suggest that S. pistillata has adapted its CA isoforms to achieve the physiological functions in different physicochemical microenvironments. View Full-Text
Keywords: carbonic anhydrases; metalloenzymes; hydratase activity; anion inhibition profile; biomineralization; corals CAs; isoforms; recombinant enzyme carbonic anhydrases; metalloenzymes; hydratase activity; anion inhibition profile; biomineralization; corals CAs; isoforms; recombinant enzyme
►▼ Show Figures 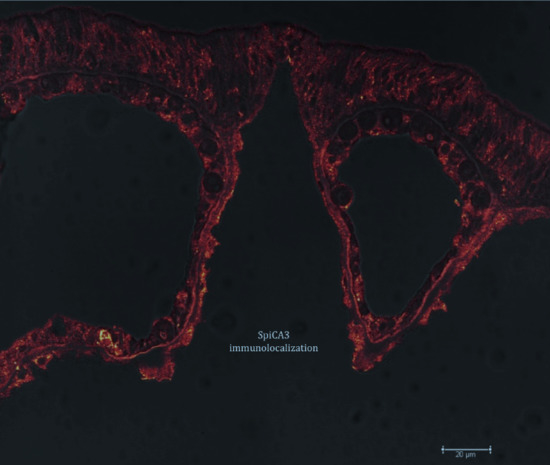