The Production of Human β-Glucocerebrosidase in Nicotiana benthamiana Root Culture

Gaucher disease is caused by a deficiency of the enzyme glucocerebrosidase (GCase). Currently, enzyme-replacement therapy using recombinant GCase produced in mammalian cells is considered the most effective treatment. Plants are an attractive alternative host for recombinant protein production due to the low cost of large-scale production and lack of risk of contamination by human pathogens. Compared to whole plants, root cultures can grow faster. Therefore, this study aimed to produce recombinant GCase in a Nicotiana benthamiana root culture. Root culture of a GCase-producing transgenic plant was induced by indole-3-acetic acid at the concentration of 1 mg/L. Recombinant GCase was successfully produced in roots as a functional protein with an enzyme activity equal to 81.40 ± 17.99 units/mg total protein. Crude proteins were extracted from the roots. Recombinant GCase could be purified by concanavalin A and phenyl 650C chromatography. The productivity of GCase was approximately 1 µg/g of the root. A N-glycan analysis of purified GCase was performed using nano LC/MS. The Man3XylFucGlcNAc2 structure was predominant in purified GCase with two plant-specific glycan residues. This study presents evidence for a new, safe and efficient system of recombinant GCase production that might be applied to other recombinant proteins. View Full-Text
Keywords: human glucocerebrosidase; recombinant protein; Nicotiana benthamiana; root culture; plant-made pharmaceutical human glucocerebrosidase; recombinant protein; Nicotiana benthamiana; root culture; plant-made pharmaceutical
►▼ Show Figures 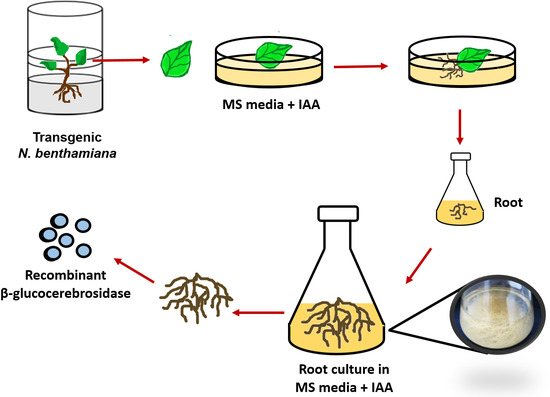