Treadmill Running Ameliorates Destruction of Articular Cartilage and Subchondral Bone, Not Only Synovitis, in a Rheumatoid Arthritis Rat Model

Rheumatoid arthritis (RA) is an autoimmune disease in which the synovium is the primary target tissue. Pro-inflammatory cytokines, such as tumor necrosis factor (TNF)-α, interleukin (IL)-6, IL-1b, and stromal cell-derived factor 1 (CXCL 12), are produced excessively in the synovium of patients with RA, resulting in joint destruction, joint swelling, arthralgia, limited range of motion, and other complications [1,2,3]. RA-related systemic complications affect major important organs including the heart, lungs, liver, and/or brain [4]. The progression of these local and global symptoms reduce activities of daily life (ADL) and lead to various complications.
Pharmacotherapy is the basic treatment for RA. The advent of biological disease-modifying anti-rheumatic drugs (bDMARDs) caused a paradigm shift in RA treatment and made possible the minimization of joint destruction [5,6,7]. However, prescription of bDMARDs is limited because of their adverse effects and/or cost [8,9]. Therefore, the development of additional drug therapies is necessary.
Exercise therapy is useful not only for orthopedic diseases but also for various systemic diseases because of its safety and convenience. Exercise therapy includes stretching, muscle training, range of motion training, and others. Among them, exercise therapy using the treadmill has protective effects on the articular cartilage and subchondral bones in patients with osteoarthritis (OA); in healthy individuals [10] it suppresses osteophyte formation, bone destruction [11], and it also improves joint symptoms associated with OA. It was reported that treadmill exercise contributes to the improvement of cardiopulmonary function and improvement in ADL in patients with cardiac and/or pulmonary diseases [12,13]. Thus, exercise therapy contributes to improvement, not only of joint symptoms, but also of systematic improvement in ADL. It has been reported that exercise therapy for RA also ameliorates joint symptoms [14] and improves physical function and ADL, with improvement of muscle strength and cardiopulmonary function [15]. A Cochrane review strongly recommends systemic exercise therapy for RA [16], but the molecular and biological mechanisms of exercise therapy for RA have not been elucidated, and the effects on joint destruction remain unknown. An analysis of the influence of exercise therapy on joints in RA could lead to the development of appropriate exercise therapy for RA. Based on this evidence, the objective of this study was to evaluate the influence of exercise therapy for active RA on articular cartilage and subchondral bone using a collagen-induced arthritis (CIA) animal model.

2.1. The Effect of Treadmill Running on Articular Cartilage

To evaluate the effects of treadmill running on articular cartilage in CIA rats, the right paw was evaluated by histological examination with hematoxylin and eosin (H & E) or safranin O staining on day 42 of our protocol (Figure 1 and Figure 2A).
Histological examination of the paws of the rats in the CIA group 42 days post-immunization showed typical signs of RA, including prominent hyperplasia of the synovium, massive infiltration of inflammatory cells into the articular cavity, degeneration of the articular cartilage caused by pannus, and bone erosion. In contrast, histological examination of the paws of the CIA + treadmill group of rats at 42 days post-immunization and after 28 days of treadmill running, showed that inflammatory cell infiltration and synovial membrane proliferation were significantly suppressed compared to those in the CIA group and that destruction of joint structure was also significantly suppressed compared to that in the CIA group. The stainability of articular cartilage of the ankles stained with safranin O in the CIA + treadmill group of rats was also improved compared to those in the CIA group (Figure 2A). Histological arthritis scoring also indicated that the manifestations of RA were significantly milder in CIA + treadmill group of rats than in CIA group of rats (Figure 2B).

2.2. Influence of Treadmill Running on TNF-α and Cx43 in Synovium

We evaluated the effects of treadmill running on pro-inflammatory cytokines in the synovium using ImageJ (National Institutes of Health, Bethesda, MD, USA) (Figure 3). TNF-α was evaluated by immunohistochemistry as a representative pro-inflammatory cytokine. Cx43 was also evaluated because we consider that Cx43 may be a key gene associated with RA onset [17]. Production of TNF-α in the synovial membrane increased in the CIA group; this increase tended to be suppressed in the CIA + treadmill group. In addition, production of Cx43 increased in the CIA group; this increase was also suppressed in the CIA treadmill group. The increase in Cx43 production was similar to that of TNF-α.

2.3. Prevention of Bone Loss in RA Model by Treadmill Running

2.4. The Effects of Treadmill Running on Bone Erosion and Formation in CIA Rats

This study was conducted in accordance with the animal research guidelines of the Kyoto Prefectural University of Medicine, Kyoto, Japan (Code no. M25-29, 1 April 2017).

Four weeks after starting the treadmill running protocol in the treadmill and CIA + treadmill groups, all rats were sacrificed and right hind limbs were excised and fixed in 4% paraformaldehyde (Wako, Osaka, Japan), demineralized in 20% ethylenediaminetetraacetic acid, and embedded in paraffin. Sagittal sections, 6μm in thickness, were prepared from the center of the ankle. The sections were stained with hematoxylin and eosin or safranin O. We histologically evaluated arthritic changes, such as infiltration of inflammatory cells, synovial proliferation, destruction of articular cartilage, and bone erosion, as previously described [34]. To investigate the activity of osteoclasts and osteoblasts in vivo, sections were stained with a TRAP/ALP staining kit (Wako Pure Chemical Industries, Osaka, Japan) following the manufacturer’s procedure.

For immunohistochemistry of TNF-α and Cx43, paraffin-embedded sections were de-paraffinized in xylene, rehydrated through graded alcohol, and immersed in PBS. Endogenous peroxidase activity was blocked by incubating the sections in 3% H2O2 in methanol for 5 min. The sections were incubated at 4 °C with rabbit polyclonal anti-TNF-α (ab6671, Abcam, Cambridge, UK) at 1:150 or anti-Cx43 (#3512, Cell Signaling Technology, Danvers, MA, USA) at 1:50 overnight. After extensive washing with PBS, the sections were incubated in Histofine Simple Stain Rat MAX-PO (NICHIREI BIOSCIENCES INC., Tokyo, Japan) for 30 min at room temperature. Immunostaining was detected by DAB staining. Counter staining was performed with Mayer’s hematoxylin. The images were analyzed using ImageJ (National Institutes of Health, Bethesda, MD, USA). We randomly extracted from the area where there was evidence of synovial hyperplasia from each slide at 3 regions. The percentage of immunostaining positive tissue within the imaging area was averaged and evaluated semi-quantitatively.

Rat left ankle joints fixed in 70% ethanol were scanned using a µ-CT system (TOSCANER-32300μFD, TOSHIBA, Tokyo, Japan). The reconstructed data sets were examined using three-dimensional data analysis software (TRI/3-D-BON, RATOC System Engineering Co., Tokyo, Japan). The volumes of interest were defined in the trabecular zone in the talus bones. To analyze the talus, the following trabecular bone parameters in the whole talus were evaluated: BV/TV, Tb.Th, and Tb.Sp. Moreover, to quantify bone loss, indirect parameters of microarchitecture were also assessed, including MSV, which is the mean volume of all the parts of an object that can be unobscured in all the directions from a point inside the object [35]. We investigated eroded bone surface per total bone surface on talus and osteophyte volume per whole talus using TRI 3D-BON software (RATOC System Engineering Co., Tokyo, Japan).

All data are presented as the mean and standard deviation (SD). We analyzed all data using analysis of variance (ANOVA), and performed post-hoc testing using the Tukey–Kramer test. The non-parametric Mann–Whitney U-test was used to evaluate the statistical significance of differences in histological scores. In all analyses, we defined p < 0.05 as statistically significant.

To our knowledge, this study is the first to show that treadmill running in CIA rats suppresses the destruction of joints and improves osteoporosis. This mechanism may involve TNF-α and Cx43, which were suppressed in the CIA + treadmill running group compared with the CIA group. Treadmill running may play an important role in the suppression of pro-inflammatory cytokine production. We expect that exercise therapy, including treadmill running, from the early stage of disease is also important in patients with RA. 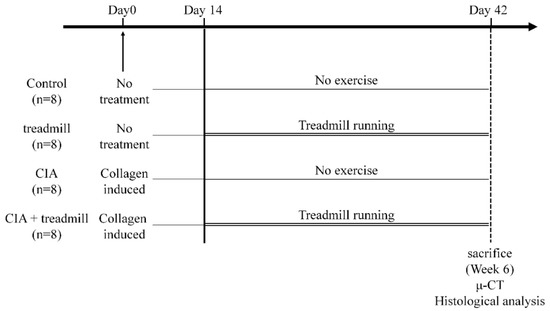 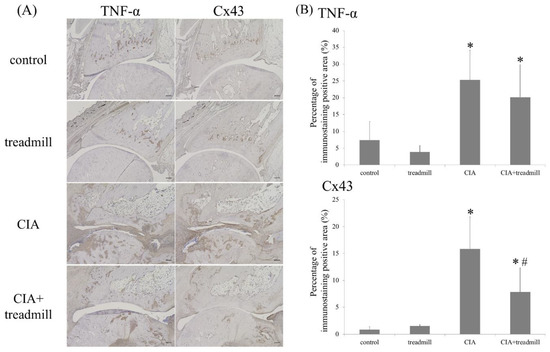 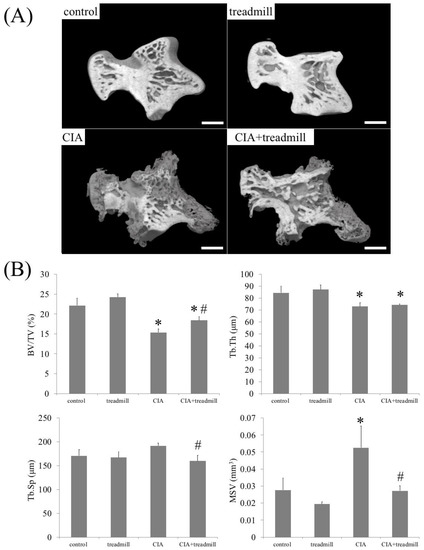 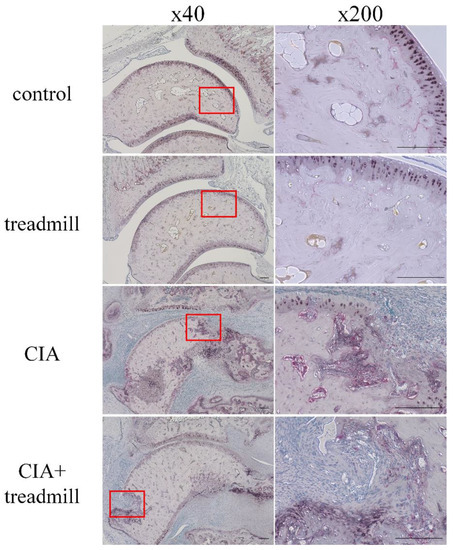