Bioactivities of Phenolics by Focusing on Suppression of Chronic Diseases: A Review
Next Article in Special Issue

Sirt1 Protects against Oxidative Stress-Induced Apoptosis in Fibroblasts from Psoriatic Patients: A New Insight into the Pathogenetic Mechanisms of Psoriasis

:
Psoriasis, a multisystem chronic disease characterized by abnormal keratinocyte proliferation, has an unclear pathogenesis where systemic inflammation and oxidative stress play mutual roles. Dermal fibroblasts, which are known to provide a crucial microenvironment for epidermal keratinocyte function, represented the selected experimental model in our study which aimed to clarify the potential role of SIRT1 in the pathogenetic mechanisms of the disease. We firstly detected the presence of oxidative stress (lipid peroxidation and total antioxidant capacity), significantly reduced SIRT1 expression level and activity, mitochondrial damage and apoptosis (caspase-3, -8 and -9 activities) in psoriatic fibroblasts. Upon SIRT1 activation, redox balance was re-established, mitochondrial function was restored and apoptosis was no longer evident. Furthermore, we examined p38, ERK and JNK activation, which was strongly altered in psoriatic fibroblasts, in response to SIRT1 activation and we measured caspase-3 activity in the presence of specific MAPK inhibitors demonstrating the key role of the SIRT1 pathway against apoptotic cell death via MAPK modulation. Our results clearly demonstrate the involvement of SIRT1 in the protective mechanisms related to fibroblast injury in psoriasis. SIRT1 activation exerts an active role in restoring both mitochondrial function and redox balance via modulation of MAPK signaling. Hence, SIRT1 can be proposed as a specific tool for the treatment of psoriasis.
Keywords:
SIRT1; MAPK; oxidative stress; psoriasis

Psoriasis, a chronic, inflammatory multisystemic disease affecting 2–3% of the world population, is characterized by abnormal keratinocyte proliferation resulting in the formation of raised, itchy and well-demarcated erythematous lesions on the skin. The pathogenesis of psoriasis is not well understood, but recent data suggest that both innate and adaptive immunity have a key role in the disease [1]. Aberrant activation and metabolism of epidermal keratinocytes leading to strongly enhanced keratinocyte proliferation and anomalous terminal differentiation are the hallmark of psoriatic skin. The critical role of dermal fibroblasts in providing a crucial microenvironment for epidermal keratinocyte function [2] and in regulating epidermal morphogenesis was already suggested [3]. Moreover, recent reports demonstrated that, in vivo, improvement of aged dermal fibroblast function significantly increases epidermal keratinocyte proliferation with consequent enlargement of epidermal thickness [4]. However, the molecular features and the factors responsible for the complex interactions between dermal stromal cells and epidermal keratinocytes in both physiologic and pathologic conditions are still to be elucidated. On these bases, we focused on dermal fibroblasts which exert specific functions in the microenvironment of epidermal keratinocytes and, together with infiltrating PMNs, induce a marked redox imbalance in psoriatic derma by extensively producing reactive oxygen species (ROS), such as superoxide and H2O2, and thus displaying a significant role in the anomalous keratinocyte growth which characterizes psoriasis [5].
The key role of ROS in the pathogenesis of psoriasis has been already reported [6,7]. Indeed, several studies have revealed increased levels of oxidative stress markers and decreased activity of the main antioxidant enzymes in the plasma of psoriatic patients [8,9,10,11,12]. In addition, it has been demonstrated that mitogen-activated protein kinases (MAPK) pathways, such as extracellular signal-regulated kinase (ERK), c-Jun N-terminal kinase (JNK) and p38 MAPK, are involved in the pathogenesis of psoriasis [7,13,14,15,16,17]. However, the molecular regulatory mechanisms of these cellular signal transduction pathways and their possible interplay are not fully elucidated. A variety of stress stimuli, including oxidative stress, induces functional changes of these kinases similar to those found to be associated with apoptosis [18]. Similarly, NAD+-dependent protein deacetylase SIRT1 has been shown to be strongly upregulated by oxidative stress [19]. SIRT1, the most extensively studied member of the sirtuin family, plays a key role in metabolism, stress responses, and many other cellular processes [20]. Additionally, our previous data demonstrated that SIRT1 upregulation affects the MAPK pathway and inhibits pro-apoptotic molecules, reducing oxidative stress and apoptosis in several cellular models [21,22].
Here, for the first time, we investigated in primary fibroblasts from lesional psoriatic skin, the possible involvement of SIRT1 in MAPK pathways.

2.1. SIRT1 Expression and Activity in Fibroblasts from Healthy and Psoriatic Subjects

2.2. Dose-Dependent Effects of SIRT1720 on SIRT1 Activity in Psoriatic Fibroblasts

A dose-dependent test was performed in psoriatic fibroblasts treated with SRT1720 concentrations from 1 to 50 µM (Figure 1C) to evaluate the effect of SRT1720 on SIRT1 activity. Treatment (24 h) with 10 µM SRT1720 induced a dramatic increase in SIRT1 activity (3.85 ± 0.29 fold increase). Hence, 10 µM SRT1720 was used for the programmed experiments. Interestingly, the addition of SIRT1 siRNA to SRT1720-treated cells induced a complete abolishment of the observed increase (p < 0.01) (Figure 1C).

The Local Ethics Committee approved the present study. All experiments were performed on twelve patients (six males and six females) affected by moderate psoriasis (PASI = 12.4 ± 0.5) with a mean age of 41.4 ± 7.6 years and with a mean disease duration of 14.1 years (from 8 to 25 years). The demographic and clinical data for each patient are summarized in Table 1. Seven healthy controls (four males and three females), matched for age and body mass index, were also enrolled in the study. No subject was subjected to any systemic therapy before or during the study, or had a history of any disease, e.g., diabetes mellitus and atherosclerosis, which might affect blood redox status. All subjects provided signed informed consent. The study was carried out according to the Helsinki Declaration.

4.2. Fibroblast Isolation and Setting Up of Cell Cultures

Lesional skin punch biopsies from twelve patients affected by plaque psoriasis and from seven healthy controls were used to obtain primary fibroblasts cell cultures. Briefly, skin biopsies were incubated with dispase II (2 U/mL, Sigma-Aldrich, Milan, Italy) and the derma was digested with collagenase (3 mg/mL, Sigma-Aldrich) for 45 min at 37 °C. Then, cells were filtered through a 70 μm filter to remove debris. Cells were cultured in DMEM medium (Sigma-Aldrich) with 10% FBS (Sigma-Aldrich) and 1% penicillin/streptomycin (Sigma-Aldrich). Fibroblasts were characterized by a high Vimentin (Sigma-Aldrich) expression by FACS and confocal microscopy analyses. Cells up to the fourth passage were used for experiments.

Fibroblasts from psoriatic patients or controls were grown for 24 h in the presence of 10 μM SRT1720 (a selective small molecule activator of SIRT1).
In another set of experiments, cells were treated with 10 μM p38 kinase inhibitor (SB203580), 10 μM JNK inhibitor (SP600125), 10 μM MEK inhibitor (PD98059), and 1 μM specific SIRT1 inhibitor (6-Chloro-2,3,4,9-tetrahydro-1H-Carbazole-1-carboxamide) for 3 h. All reagents were purchased from Sigma at the highest purity available.

4.9. Assessment of Intracellular ROS, NO Production and Mitochondrial Superoxide

Caspase-3 and caspase-9 activity were analysed by confocal microscopy and FACS analysis. Fibroblasts were loaded with FAM-FLICA™ Caspases solution (Caspase FLICA kit FAM-DEVD-FMK) for 1 h at 37 °C, washed twice with PBS and analysed by a Leica TCS SP5 confocal laser scanning microscope and FACSCanto flow cytometer (Becton-Dickinson) [72]. In another set of experiments, aimed to assess the role of ERK, p38 and JNK signalling pathways, cells were treated with 10 μM SP600125 (specific JNK inhibitor), 10 μM PD98059 (MEK inhibitor) or 1 μM SIRT1 inhibitor for 3 h prior (or not) to SRT1720 treatment.

Fibroblasts from healthy subjects were cultured in complete medium without antibiotics for 2 days. Cells were seeded into a six-well plate. Then, 8 μl of LipofectamineTM LTX and 3 μL PLUSTM Reagent (Life Technologies, Carlsbad, CA, USA) were diluted in 90 μL of culture medium. Subsequently, 12 μL SIRT1 siRNA (siRNA for SIRT1-sc-40986- from Santa Cruz Biotechnology) was mixed with the medium containing Lipofectamine together with PLUS reagent and incubated for 30 min at RT for complex formation. Finally, cells were incubated with a final SIRT1 siRNA concentration of 100 nM. After 48 h, SIRT1 protein expression was determined by Western blot. To study the possible role of SIRT1 in the oxidative-mediated cell injury, untreated and SIRT1 RNAi-treated fibroblasts obtained from healthy subjects were challenged for 3 h with 500 μM H2O2. ROS production, lipid peroxidation, caspase-3 activity and mitochondrial membrane polarization were evaluated by confocal microscope analysis.

All data are expressed as the mean ± SD. Comparisons between groups were analyzed using one-Way Analysis of variance (ANOVA) followed by the Bonferroni t-test. A p value <0.05 was accepted as statistically significant.

This study was supported by “Fondi di Ateneo” research funding from the University of Florence awarded to Claudia Fiorillo. 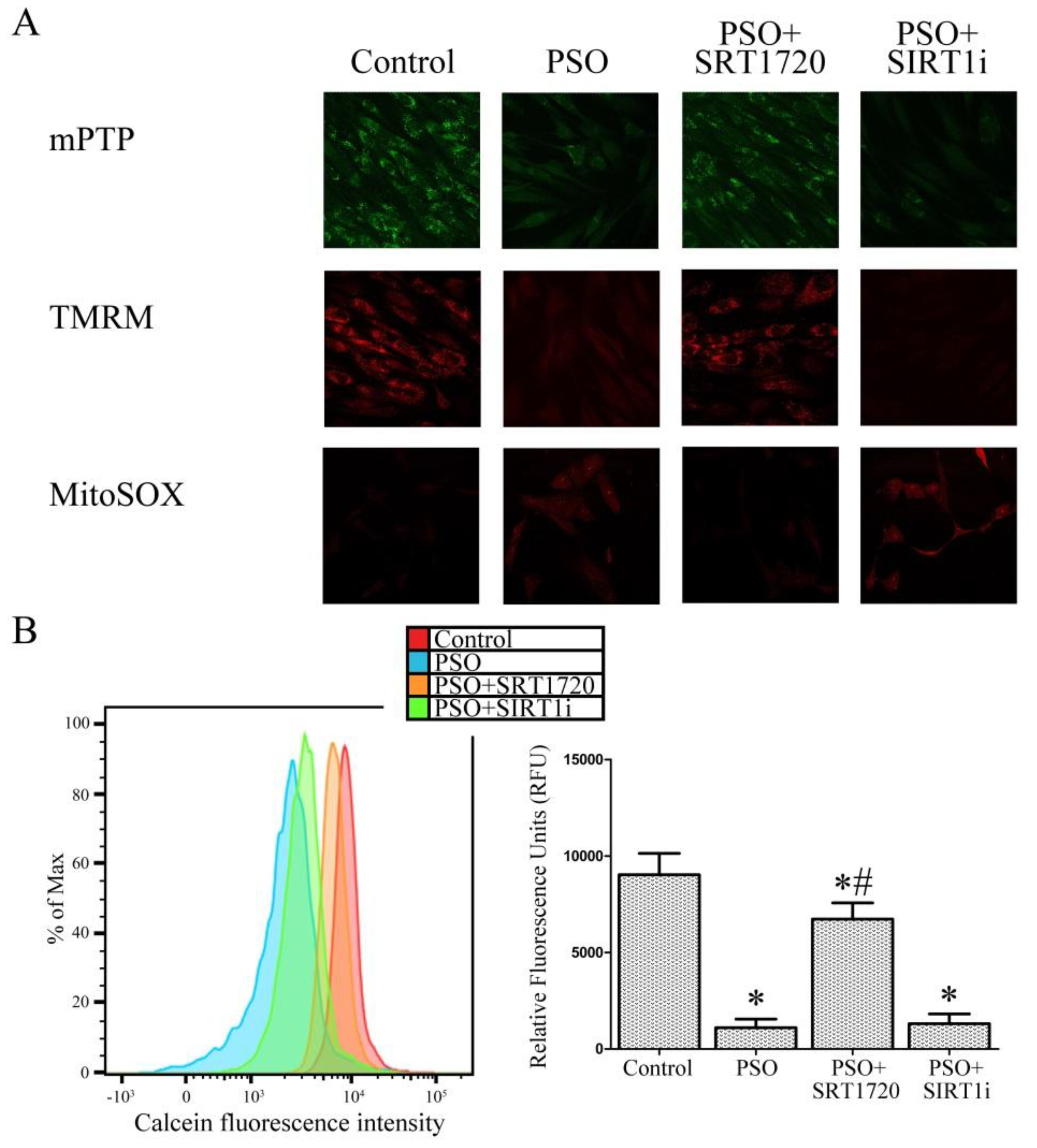