Sequencing, Characterization, and Comparative Analyses of the Plastome of Caragana rosea var. rosea
Next Article in Special Issue

The Impact of Human Papilloma Viruses, Matrix Metallo-Proteinases and HIV Protease Inhibitors on the Onset and Progression of Uterine Cervix Epithelial Tumors: A Review of Preclinical and Clinical Studies

Infection of uterine cervix epithelial cells by the Human Papilloma Viruses (HPV) is associated with the development of dysplastic/hyperplastic lesions, termed cervical intraepithelial neoplasia (CIN). CIN lesions may regress, persist or progress to invasive cervical carcinoma (CC), a leading cause of death worldwide. CIN is particularly frequent and aggressive in women infected by both HPV and the Human Immunodeficiency Virus (HIV), as compared to the general female population. In these individuals, however, therapeutic regimens employing HIV protease inhibitors (HIV-PI) have reduced CIN incidence and/or clinical progression, shedding light on the mechanism(s) of its development. This article reviews published work concerning: (i) the role of HPV proteins (including HPV-E5, E6 and E7) and of matrix-metalloproteinases (MMPs) in CIN evolution into invasive CC; and (ii) the effect of HIV-PI on events leading to CIN progression such as basement membrane and extracellular matrix invasion by HPV-positive CIN cells and the formation of new blood vessels. Results from the reviewed literature indicate that CIN clinical progression can be monitored by evaluating the expression of MMPs and HPV proteins and they suggest the use of HIV-PI or their derivatives for the block of CIN evolution into CC in both HIV-infected and uninfected women. View Full-Text
Keywords: HPV; uterine CIN; uterine cervical carcinoma; MMP; HIV-PI HPV; uterine CIN; uterine cervical carcinoma; MMP; HIV-PI
►▼ Show Figures 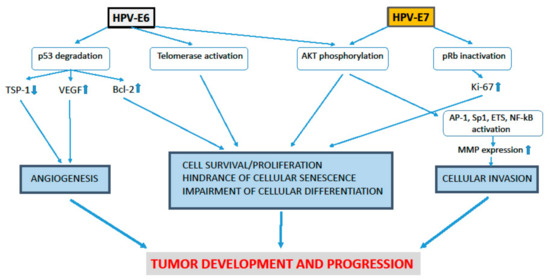