The Role of miRNAs in Virus-Mediated Oncogenesis

Noncoding RNAs (ncRNAs) constitute the majority of the human transcribed genome. This largest class of RNA transcripts plays diverse roles in a multitude of cellular processes, and has been implicated in many pathological conditions, especially cancer. The different subclasses of ncRNAs include microRNAs, a class of short ncRNAs; and a variety of long ncRNAs (lncRNAs), such as lincRNAs, antisense RNAs, pseudogenes, and circular RNAs. Many studies have demonstrated the involvement of these ncRNAs in competitive regulatory interactions, known as competing endogenous RNA (ceRNA) networks, whereby lncRNAs can act as microRNA decoys to modulate gene expression. These interactions are often interconnected, thus aberrant expression of any network component could derail the complex regulatory circuitry, culminating in cancer development and progression. Recent integrative analyses have provided evidence that new computational platforms and experimental approaches can be harnessed together to distinguish key ceRNA interactions in specific cancers, which could facilitate the identification of robust biomarkers and therapeutic targets, and hence, more effective cancer therapies and better patient outcome and survival. View Full-Text
Keywords: cancer; miRNA; lncRNA; circRNA; pseudogene; ceRNA cancer; miRNA; lncRNA; circRNA; pseudogene; ceRNA
►▼ Show Figures 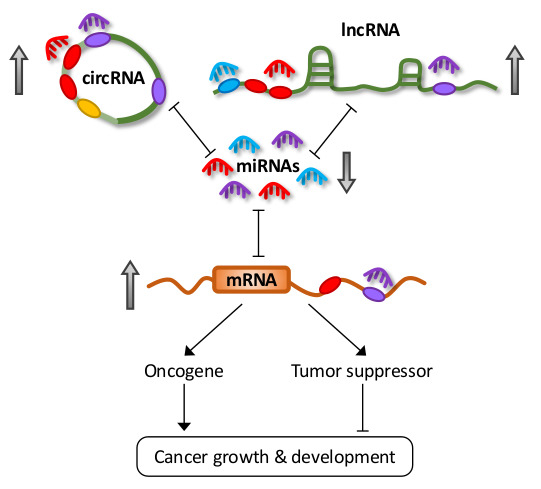