The Inside Story of Adenosine

The prognosis of esophageal cancer (EC) is poor, despite considerable effort of both experimental scientists and clinicians. The tri-modality treatment consisting of neoadjuvant chemoradiation followed by surgery has remained the gold standard over decades, unfortunately, without significant progress in recent years. Suitable prognostic factors indicating which patients will benefit from this tri-modality treatment are missing. Some patients rapidly progress on the neoadjuvant chemoradiotherapy, which is thus useless and sometimes even harmful. At the same time, other patients achieve complete remission on neoadjuvant chemoradiotherapy and subsequent surgery may increase their risk of morbidity and mortality. The prognosis of patients ranges from excellent to extremely poor. Considering these differences, the role of drug metabolizing enzymes and transporters, among other factors, in the EC response to chemotherapy may be more important compared, for example, with pancreatic cancer where all patients progress on chemotherapy regardless of the treatment or disease stage. This review surveys published literature describing the potential role of ATP-binding cassette transporters, the genetic polymorphisms, epigenetic regulations, and phenotypic changes in the prognosis and therapy of EC. The review provides knowledge base for further research of potential predictive biomarkers that will allow the stratification of patients into defined groups for optimal therapeutic outcome. View Full-Text
Keywords: esophagus; cancer; ABC transporters; chemotherapy; radiotherapy; prognosis; biomarker esophagus; cancer; ABC transporters; chemotherapy; radiotherapy; prognosis; biomarker
►▼ Show Figures 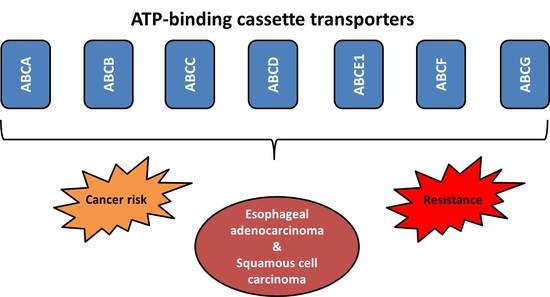