Review
Recent Advances in Treatment of Coronary Artery Disease: Role of Science and Technology
by

:
Coronary artery disease (CAD) is one of the most common causes of death worldwide. In the last decade, significant advancements in CAD treatment have been made. The existing treatment is medical, surgical or a combination of both depending on the extent, severity and clinical presentation of CAD. The collaboration between different science disciplines such as biotechnology and tissue engineering has led to the development of novel therapeutic strategies such as stem cells, nanotechnology, robotic surgery and other advancements (3-D printing and drugs). These treatment modalities show promising effects in managing CAD and associated conditions. Research on stem cells focuses on studying the potential for cardiac regeneration, while nanotechnology research investigates nano-drug delivery and percutaneous coronary interventions including stent modifications and coatings. This article aims to provide an update on the literature (in vitro, translational, animal and clinical) related to these novel strategies and to elucidate the rationale behind their potential treatment of CAD. Through the extensive and continued efforts of researchers and clinicians worldwide, these novel strategies hold the promise to be effective alternatives to existing treatment modalities.
Keywords:
stem cells; surgery; treatment modality; heart

The scientific advancements in the understanding of the pathophysiology of coronary artery disease (CAD) have led to a decrease in the mortality (in age-adjusted subjects) towards the turn of the 20th century [1]. However, CAD remains one of the leading cause of death in the world [2]. CAD is responsible for one-third of deaths in developing and developed countries in people over 35 years of age, with the percentage reaching close to 50% (according to some estimates) in western countries [3,4]. The worldwide burden is set to reach 47 million disability adjusted life years (years lost due to disability, ill-health or death) by the year 2020 as projected by World Health Organization [5]. In the United States alone, there are estimated to be 900,000 subjects who suffeedr or die from CAD and its complications in 2016 [6].
There has been a greater focus in research aimed at all aspects of CAD in the last decade. Due to exhaustive efforts from clinicians and researchers worldwide, there has been significant progress made in developing novel strategies for patients suffering from CAD and its associated complications. These strategies have ranged from drugs to robotic surgery to nanotechnology. This article will summarize the literature on the recent advances in coronary artery disease research in respect to therapeutics and biomarkers. This article will cover topics under the following headings: robotic surgery, nanotechnology, stem cells and other related advancements.

Robots have been in place in mass production industries for many years. However, their introduction in medicine was fairly recent and started in the fields of surgery and radiotherapy. In cardiology, they have been in use for more than a decade for surgeries like mitral valve repair, coronary artery bypass graft and septal defect closure. The technology is fast evolving with reports emerging about their potential applications in percutaneous coronary intervention (Figure 1) and atrial fibrillation ablation [7]. Robotics provide the operator with advantages such as improved ergonomics, precision and sometimes shortening of intraoperative time (Figure 2) [7]. There have been reports that robot-assisted surgery can shorten patient hospital stay and improve patient perception (Figure 2) [8].
In the field of interventional cardiology, robotics are being used for catheter-based surgical procedures. Conventional angiography radiation exposure for CAD patients is estimated at 7 mSV, and this exposure can be increased by up to 5 times in complicated surgeries [9]. Robotic guided surgery has potential to limit this radiation exposure. In addition, they can also reduce contrast induced nephrotoxicity and associated mortality in patients (Figure 2) [9]. In terms of patient related outcomes, the robotic assisted surgery has potential benefits as it can accurately measure the size of the lesions (which can be miscalculated using 2D angiography) which could improve long-term health. Hence, they reduce radiation exposure for the surgeon and the patient as well as improve precision by rendering accurate measurements of lesions (Figure 2) [7]. Granada et al. published the first robotic interventions for cardiac patients [10]. They performed coronary angioplasty and reported 100% success rate (measured in terms of less than 30% residual stenosis along with the absence of major cardiac complications) in all of their patients (80 subjects) [10]. In a multicenter study published by Weisz et al., a percutaneous coronary intervention was performed for patients with coronary artery disease [11]. They used similar success criteria (measured in terms of less than 30% residual stenosis along with absence of major cardiac complications) and reported a 97.6% rate of success (164 patients) [11]. They also reported a significant reduction (95%) in operator radiation exposure [11].
Robotics has also been used to perform coronary artery bypass grafting in CAD patients (Figure 1). The procedure, including the harvesting of the mammary arteries and anastomosis, can be performed endoscopically [7]. The results of the clinical studies are summarized in Table 1. Although there are reported benefits for robotically assisted bypass grafting, high costs and long learning curves have slowed down its progress towards becoming used routinely [12]. Robotically assisted hybrid coronary revascularization, which involves coronary artery bypass graft as well as percutaneous coronary intervention, has also been developed as a treatment modality for CAD. There have been reported benefits such as reduced morbidity and shortened hospital stays due to the minimally invasive nature of the procedure [13,14,15,16].
The current state of robotic surgery is promising in the treatment of CAD. These systems are of excellent quality with high-end technology. Their proposed benefits in the form of improved precision, increased visibility, improved ergonomics and reduced radiation exposure have been documented, which have translated into improved patient recovery times with reduced hospital stays [7,20,21]. They also provide a distinct advantage for procedures that are difficult to be performed using endoscopy or catheters [7]. However, their translation into full-fledged clinical usage is inhibited by high cost and the learning curve needed to master these procedures [22]. It remains to be determined, with further technological advancement, whether this technology will be accepted into routine clinical practice and replace conventional technologies.

Cardiac conditions often require 3-D imaging such as magnetic resonance imaging, computerized tomography, and 3-D echography to diagnose and treat these conditions. The limitations to this are that though these images are in 3-D, they are viewed on a 2-D computer screen or films. Although it could be sufficient for some cardiac procedures, the current imaging modalities are not effective for more complex interventions [100,101]. 3-D printing has a potential role in CAD (Figure 1) as it cannot only overcome these limitations but also allow for complete visualization, tactile sense, education and surgical planning as well as simulation [102]. 3-D printing involves additive manufacturing of a model using 3-D data from imaging modalities. Scientists are starting to see the full potential of 3-D printing as the technology continues to evolve. In the field of cardiology it has tremendous potential in the treatment of congenital defects, cardiac tumors, cardiomyopathy, functional flow models, valvular heart diseases, stent placement for CAD and other cardiac surgeries [103,104,105,106]. 3-D printing allows the visualization of 3-D printed heart with coronary arteries in order to visualize the extent of occlusion and stenosis in CAD patients [107]. These models can be used in a pulsatile flow loop environment, not only to visualize and understand complex flow patterns but also to simulate interventions [105]. 3-D printed models are also useful in CAD research to compare imaging and treatment modalities [105,108]. One in vitro study mimicking a clinical scenario proved that 3-D printing could be more effective in planning and treating complex situations (bifurcation lesions) that require stent placement [106]. Tissue engineering models are now being tested to fabricate stem cells along with extracellular matrix (tissue printing) for implantation in the body [109]. In vitro studies have been successful in tissue printing cardiac cells in different scaffolds [109,110]. In animal model studies, the implantation of printed tissue in epicardial tissues showed beneficial effects including reduced adverse remodeling and improved perfusion in myocardial infarct models [109,110].

CAD patients are often on supportive, therapeutic, and lifelong medication for the condition itself and co-morbidities (such as hypercholesterolemia). There have been recent advances in drug developments for CAD patients (Figure 1). One class of drugs taken by patients suffering from CAD are oral antithrombotic medications such as aspirin and clopidogrel. A few years ago a group of drugs collectively termed as novel oral anti-coagulants were discovered. This group consists of the following drugs: ximelagatran, darexaban, dabigatran, rivaroxaban, and apixaban [111]. Of which, dabigatran, edoxaban, rivaroxaban, apixaban are approved for clinical use. Dabigatran is a competitive inhibitor of thrombin while edoxaban, rivaroxaban, and apixaban are inhibitors of clotting factor Xa. Use of dabigatran in CAD patients was studied in a phase 2 trial. The results revealed that ischemic events in patients were significantly reduced at higher doses of the drug (110 and 150 mg), but this benefit was counteracted with a four-fold increase in bleeding risk. However, the trials concluded that lower dose therapy could be used without a significant increase in bleeding risk [112].
An important protein that controls the regulation of LDL is proprotein convertase subtilisin/kexin type 9 (PCSK9) [113,114,115]. They function to reduce the number of LDL receptors thereby decreasing LDL cholesterol levels in the blood [115]. Another important drug which could block the action of PCSK9 is Alirocumab. The drug itself is a monoclonal antibody produced by recombinant DNA technology [114]. The first studies reported a reduction in LDL cholesterol levels ranging from 28% to 65% depending on the route of administration (subcutaneous or intravenous) [116]. In phase II studies (randomized controlled double blinded trials) it was reported that LDL cholesterol reduction ranged from 18.2% to 67% (depending on the dosage) compared to placebo [116,117]. When combined with atorvastatin, Alirocumab brought about a LDL cholesterol reduction of 66–73% whereas placebo and atorvastatin brought about a reduction of 17% [118]. These results were confirmed in several phase III trials [119,120,121,122,123,124,125,126,127,128,129,130]. Since high LDL levels are linked to CAD, the use of Alirocumab reduced adverse cardiovascular events by 15–48% [127,131,132]. Another drug that was recently developed for the treatment of heart failure is the angiotensin receptor-neprilysin inhibitor (ARNi). This drug contains a combination of sacubitril and valsartan, commonly referred to as the LCZ696 or ARNi [133,134]. The valsartan portion is a drug of the angiotensin receptor blocker family as well as angiotensin II receptor antagonist, while the sacubitril component is neprilysin inhibitor [135]. This drug has proven to be more effective in the treatment of heart failure than traditional Angiotensin-converting enzyme (ACE) inhibitors [136]. Although initial trials are promising, the results of phase III clinical trials are being awaited [136,137,138,139,140]

Despite great progress in cardiovascular research, CAD remains one of the most common causes of morbidity and mortality worldwide. However, significant inter-collaborative efforts between researchers, clinicians and other related professionals have led to multi-faceted and novel strategies to be developed to treat CAD and its associated conditions. Though some of these strategies have strong evidence supporting their clinical use, some others are still in the experimental stage. Despite only early evidence being available on some of these novel treatment modalities, the results are promising and hold the potential to become alternatives to current treatment options in the future. Since we live in the era of evidence-based medicine, further evidence in the form of clinical trials and long term follow up studies are required before these novel treatment strategies enter into mainstream practice. With sustained continued efforts, the future for CAD therapeutics looks substantially promising.

We thank Chia-Chen Chuang, Mykola Stetskiv, James Meade, Alicia Simpson and Evan Prather for their assistance during the manuscript preparation. 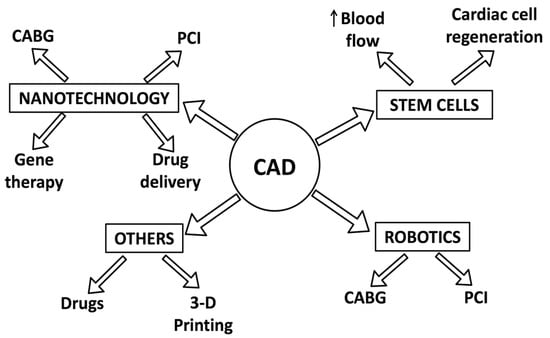 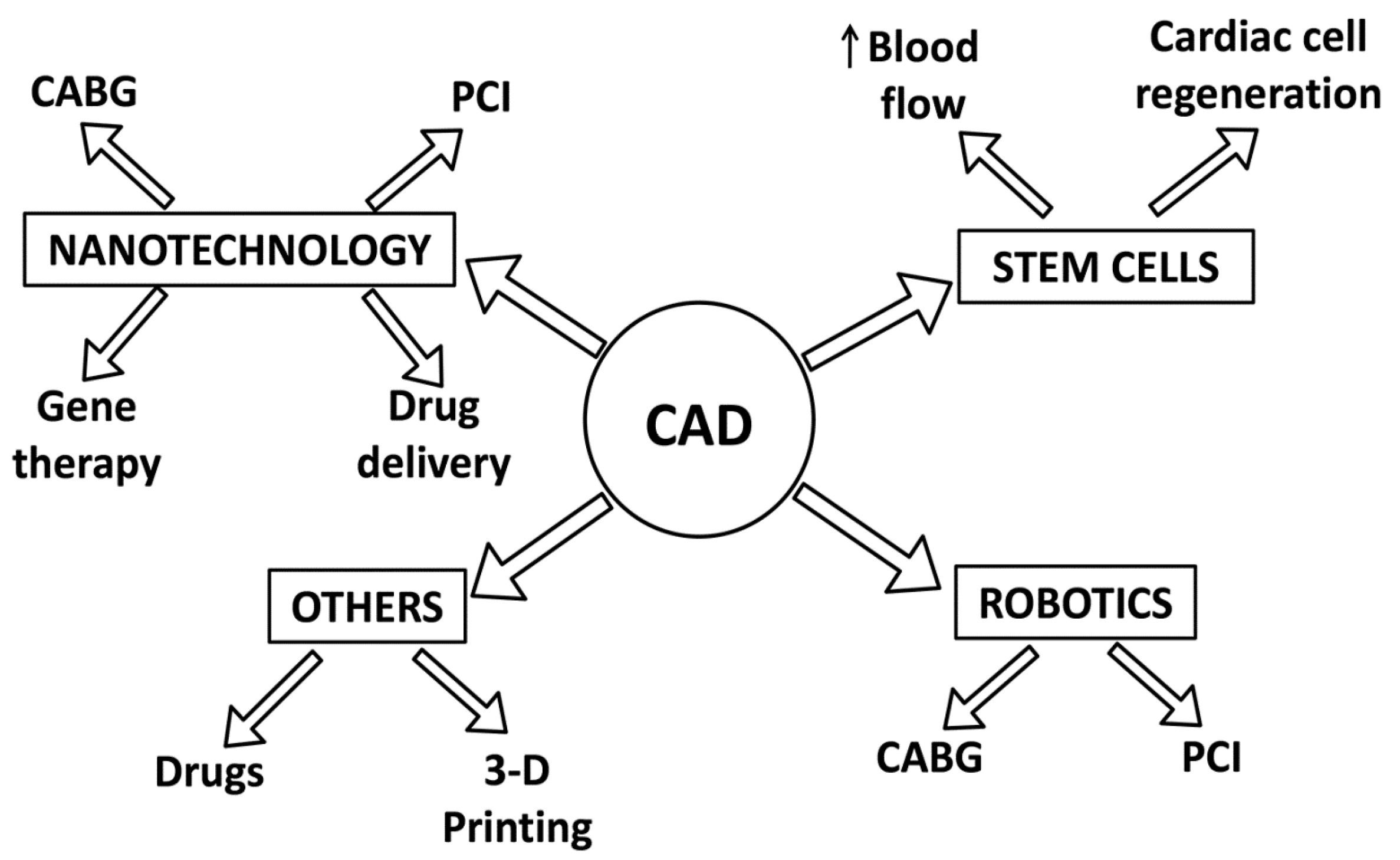 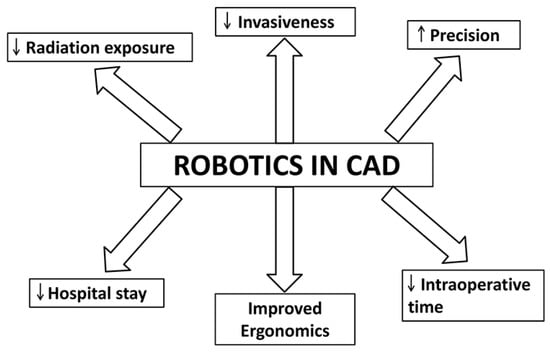 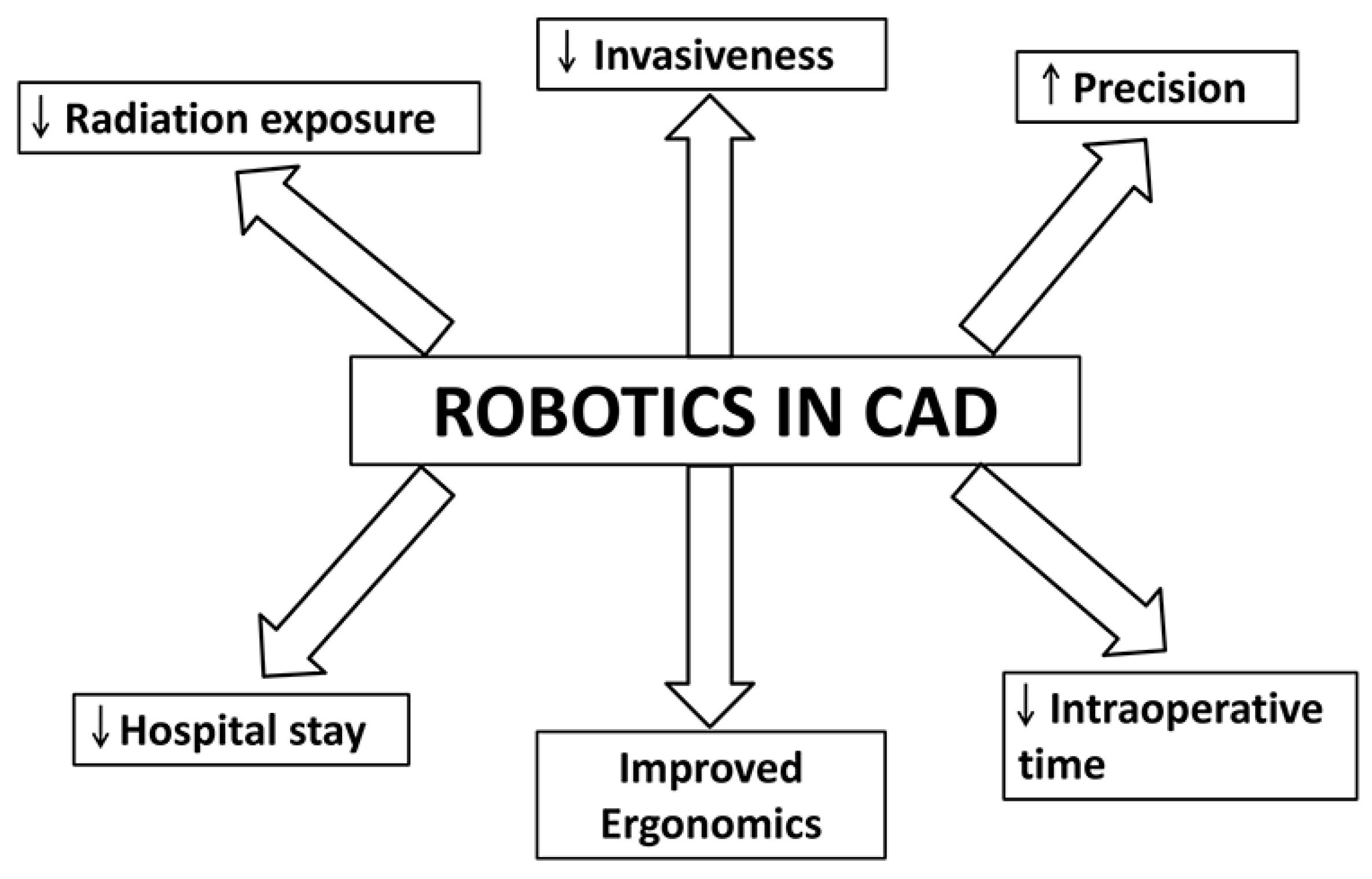 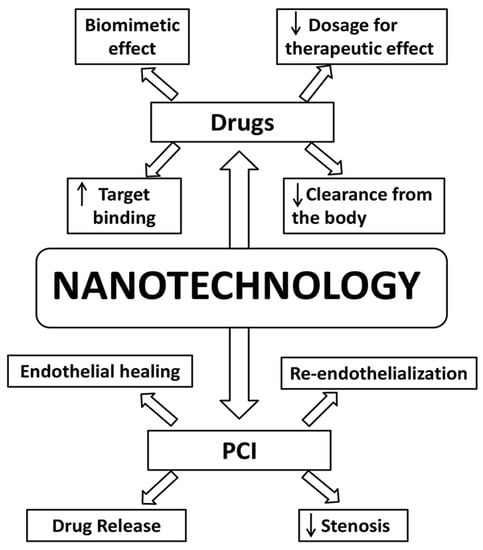 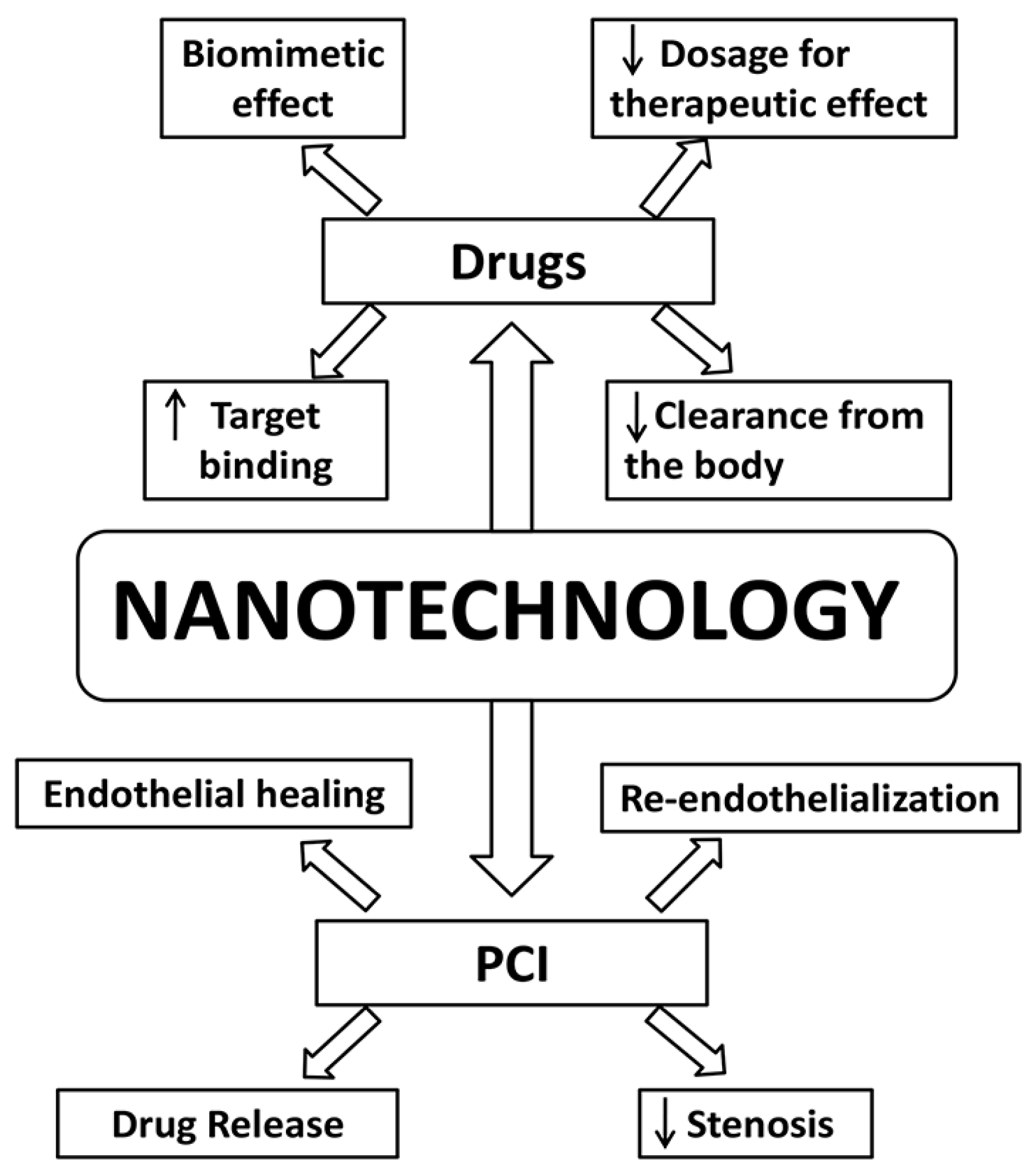 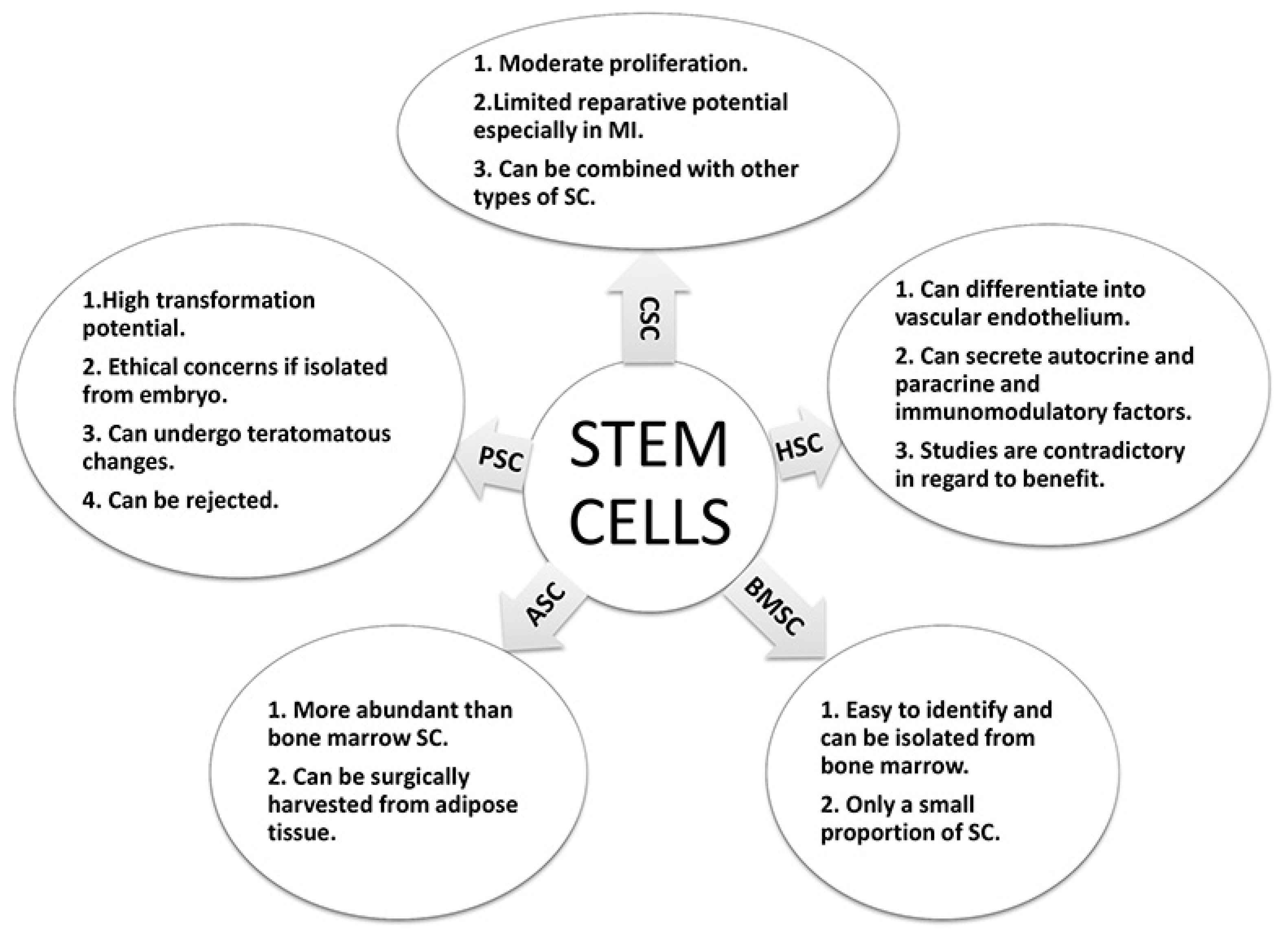