How Do We Study the Dynamic Structure of Unstructured Proteins: A Case Study on Nopp140 as an Example of a Large, Intrinsically Disordered Protein

Intrinsically disordered proteins (IDPs) are an emerging phenomenon. They may have a high degree of flexibility in their polypeptide chains, which lack a stable 3D structure. Although several biological functions of IDPs have been proposed, their general function is not known. The only finding related to their function is the genetically conserved YSK2 motif present in plant dehydrins. These proteins were shown to be IDPs with the YSK2 motif serving as a core region for the dehydrins’ cryoprotective activity. Here we examined the cryoprotective activity of randomly selected IDPs toward the model enzyme lactate dehydrogenase (LDH). All five IDPs that were examined were in the range of 35–45 amino acid residues in length and were equally potent at a concentration of 50 μg/mL, whereas folded proteins, the PSD-95/Dlg/ZO-1 (PDZ) domain, and lysozymes had no potency. We further examined their cryoprotective activity toward glutathione S-transferase as an example of the other enzyme, and toward enhanced green fluorescent protein as a non-enzyme protein example. We further examined the lyophilization protective activity of the peptides toward LDH, which revealed that some IDPs showed a higher activity than that of bovine serum albumin (BSA). Based on these observations, we propose that cryoprotection is a general feature of IDPs. Our findings may become a clue to various industrial applications of IDPs in the future. View Full-Text
Keywords: intrinsically disordered proteins; dehydrin; cryoprotection; lyophilization protection; molecular shields; biomedical application intrinsically disordered proteins; dehydrin; cryoprotection; lyophilization protection; molecular shields; biomedical application
►▼ Show Figures 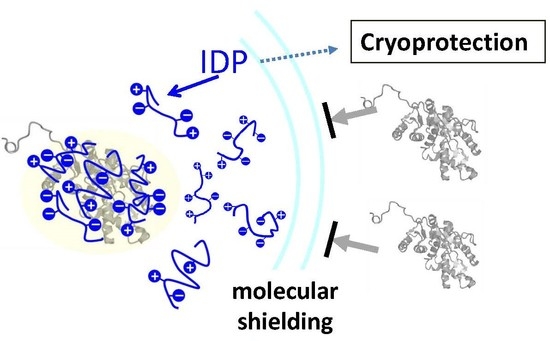