RrGT2, A Key Gene Associated with Anthocyanin Biosynthesis in Rosa rugosa, Was Identified Via Virus-Induced Gene Silencing and Overexpression
Previous Article in Journal

Hypothesis: Spontaneous Advent of the Prebiotic Translation System via the Accumulation of L-Shaped RNA Elements
Previous Article in Special Issue

The interaction between plant mitochondria and the nucleus markedly influences stress responses and morphological features, including growth and development. An important example of this interaction is cytoplasmic male sterility (CMS), which results in plants producing non-functional pollen. In current research work, we compared the phenotypic differences in floral buds of different Brassica napus CMS (Polima, Ogura, Nsa) lines with their corresponding maintainer lines. By comparing anther developmental stages between CMS and maintainer lines, we identified that in the Nsa CMS line abnormality occurred at the tetrad stage of pollen development. Phytohormone assays demonstrated that IAA content decreased in sterile lines as compared to maintainer lines, while the total hormone content was increased two-fold in the S2 stage compared with the S1 stage. ABA content was higher in the S1 stage and exhibited a two-fold decreasing trend in S2 stage. Sterile lines however, had increased ABA content at both stages compared with the corresponding maintainer lines. Through transcriptome sequencing, we compared differentially expressed unigenes in sterile and maintainer lines at both (S1 and S2) developmental stages. We also explored the co-expressed genes of the three sterile lines in the two stages and classified these genes by gene function. By analyzing transcriptome data and validating by RT-PCR, it was shown that some transcription factors (TFs) and hormone-related genes were weakly or not expressed in the sterile lines. This research work provides preliminary identification of the pollen abortion stage in Nsa CMS line. Our focus on genes specifically expressed in sterile lines may be useful to understand the regulation of CMS. View Full-Text
Keywords: cytoplasmic male sterility (CMS); phytohormones; differentially expressed genes; pollen development; Brassica napus cytoplasmic male sterility (CMS); phytohormones; differentially expressed genes; pollen development; Brassica napus
►▼ Show Figures 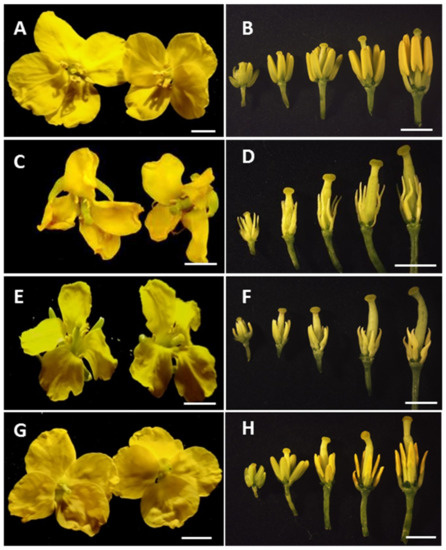