2.6. Sequence Characteristics of the Products Amplified by the 16 Markers

The sequences amplified by the 16 6RLKumi119-specific markers were isolated. These sequences have been deposited in the GenBank Database (GenBank accession numbers: MK051036–MK051051). Sequence alignment using the BLAST tool in NCBI and gene annotation indicated that all the 16 sequences did not belong to any gene sequence; therefore, they are probably not involved in active genes. Analysis using RepeatMasker software (http://repeatmasker.org/) also indicated that these sequences were not involved in repetitive DNA sequences. Nucleotide BLAST searches indicated that 14 of the 16 sequences had 91–100% similarity with the scaffolds from the 6R chromosome of S. cereale L. Lo7, and the other two sequences had 99–100% similarity with the scaffolds derived from 0R of S. cereale L. Lo7 scaffolds (Table 2). It can be noted that all the five sequences (MK051040, MK051042, MK051044, MK051045, and MK051047) were located in the scaffold Lo7_v2_scaffold_445202 6R, and both MK051050 and MK051051 were located in the scaffold Lo7_v2_scaffold_445253 6R (Table 2). According to the gene annotation of these scaffolds published by Bauer et al. [12], they did not contain genes; however, these scaffolds were still useful for the future study on the structure and function of the 6RLKumi119 segment.

For the effective utilization of elite genes in wild germplasm, it is necessary to increase our understanding of the molecular basis of target alien chromosome regions [18,19]. In this study, the small segment translocation chromosome 6DL/6RLKumi119 provides an opportunity to understand the molecular basis of the small segment 6RLKumi119 carrying powdery mildew resistance. Additionally, 16 6RLKu minichromosome-specific markers were developed, and these markers were subsequently located onto the segment 6RLKumi119 with powdery mildew resistance. These markers represent convenient tools to use the 6DL/6RLKumi119 translocation chromosome in wheat breeding programs. Using the sequences amplified by the 16 markers, 11 scaffolds derived from winter rye inbred line S. cereale L. Lo7 [12] were located on the segment 6RLKumi119. These scaffolds are useful for the further detailed studying of this segment. However, published data indicated that no active genes could be found among the 11 scaffolds [12]. There are two possible explanations for this phenomenon. First, the 6RLKu minichromosome-specific markers may be insufficient in number. Second, large gaps may exist in these scaffolds. Therefore, a greater number of 6RLKu minichromosome-specific markers are required and more complete rye genomic sequences are needed.

A monotelosomic addition line MTA6RLKu was developed according to the methods described by Qiu et al. [20]. From the self-pollinated progeny of MTA6RLKu, a 6RLKu minichromosome addition line MiA6RLKu was identified. Some seeds selected from the progeny of MiA6RLKu were irradiated with 60Co-γ rays at the Biotechnology and Nuclear Technology Research Institute, Sichuan Academy of Agricultural Sciences, China. Common wheat (Triticum aestivum L.) Mianyang 11 (MY11) and Chinese Spring (CS) were used as controls.

The root-tip metaphase cells were analyzed using non-denaturing fluorescence in situ hybridization (ND-FISH) technology. Oligonucleotide (oligo) probes Oligo-1162, Oligo-pSc200, Oligo-pSc250, Oligo-pSc119.2-1, and Oligo-pTa535-1 [21,22] were used. These oligo probes were 5′end-labelled with 6-carboxyfluorescein (6-FAM) or 6-carboxytetramethylrhodamine (Tamra). Root-tip metaphase chromosomes were prepared following the methods described by Han et al. [23]. ND-FISH analysis was performed following the methods described by Fu et al. [22] with the following minor modification. When dropped onto cell spreads, the probe mixture containing Oligo-1162 around the slides was kept above 28 °C, and the slides were immediately placed into a moist box that was incubated at 42 °C in advance for 1–2 h. Then, the slides were washed 15–20 s in 2 × SSC at 42 °C.

The PCR amplifications were carried out according to the procedure described by Li et al. [6]. Agarose gel (2%) electrophoresis was used to detect the amplicons in 1 × TAE buffer. The products amplified by the 6RLKumi119-specific primers were recovered using Universal DNA Purification Kit (Tiangen Biotech Co., Ltd, Beijing, China) and cloned using pClone007 Vector Kit (TsingKe Biotech Co., Ltd, Beijing, China). Inserts were sequenced by TsingKe Biotech (Beijing) Co., Ltd. These sequences were deposited in the GenBank Database. Finally, these sequences were used for Nucleotide BLAST searches against the S. cereale L. Lo7 scaffolds database using the BLAST tool in GrainGenes (https://wheat.pw.usda.gov/cgi-bin/seqserve/blast_rye.cgi) and gene annotation was carried out according to the data sets related to the publication by Bauer et al. [12]. Additionally, RepeatMasker software (http://repeatmasker.org/) was used to identify whether these sequences amplified by the 6RLKumi119-specific primers are repetitive DNA.

The resistance of line MiA6RLKu, the progeny of MiA6RLKu, 6D/6RLKu small segment translocation lines, and parental wheat MY11 to powdery mildew were evaluated. Plants were grown in Qionglai, Sichuan, China. The materials were naturally inoculated by locally occurring field derived powdery mildew, and infection types (IT) were scored according to the standard described by Fu et al. [5].

In conclusion, a new wheat-rye small segment translocation chromosome 6DL/6RLKumi119 with powdery mildew resistance was produced. Sixteen 6RLKumi119 specific markers were developed, and 11 S. cereale L. Lo7 scaffolds were located on the small rye segment 6RLKumi119. The small segment translocation chromosome 6DL/6RLKumi119 makes the practical utilization of the powdery mildew resistance gene on 6RLKu more likely. The 6RLKumi119-specific markers and the S. cereale L. Lo7 scaffolds that were located on the 6RLKumi119 segment may find application in future detailed studies of the structure and function of this small segment.

S.F. and Z.T. created the materials, designed the study, analyzed the data, and wrote the manuscript. H.D. and Q.D. did the ND-FISH analysis, the PCR experiments, and cloned the sequences. S.T. did the BLAST searches. S.F. and Z.T. did the powdery mildew resistance test.

This research has no conflict of interest. The funding sponsors had no role in the experiment design, material creation, data analysis, manuscript writing, and decision to publish the results. 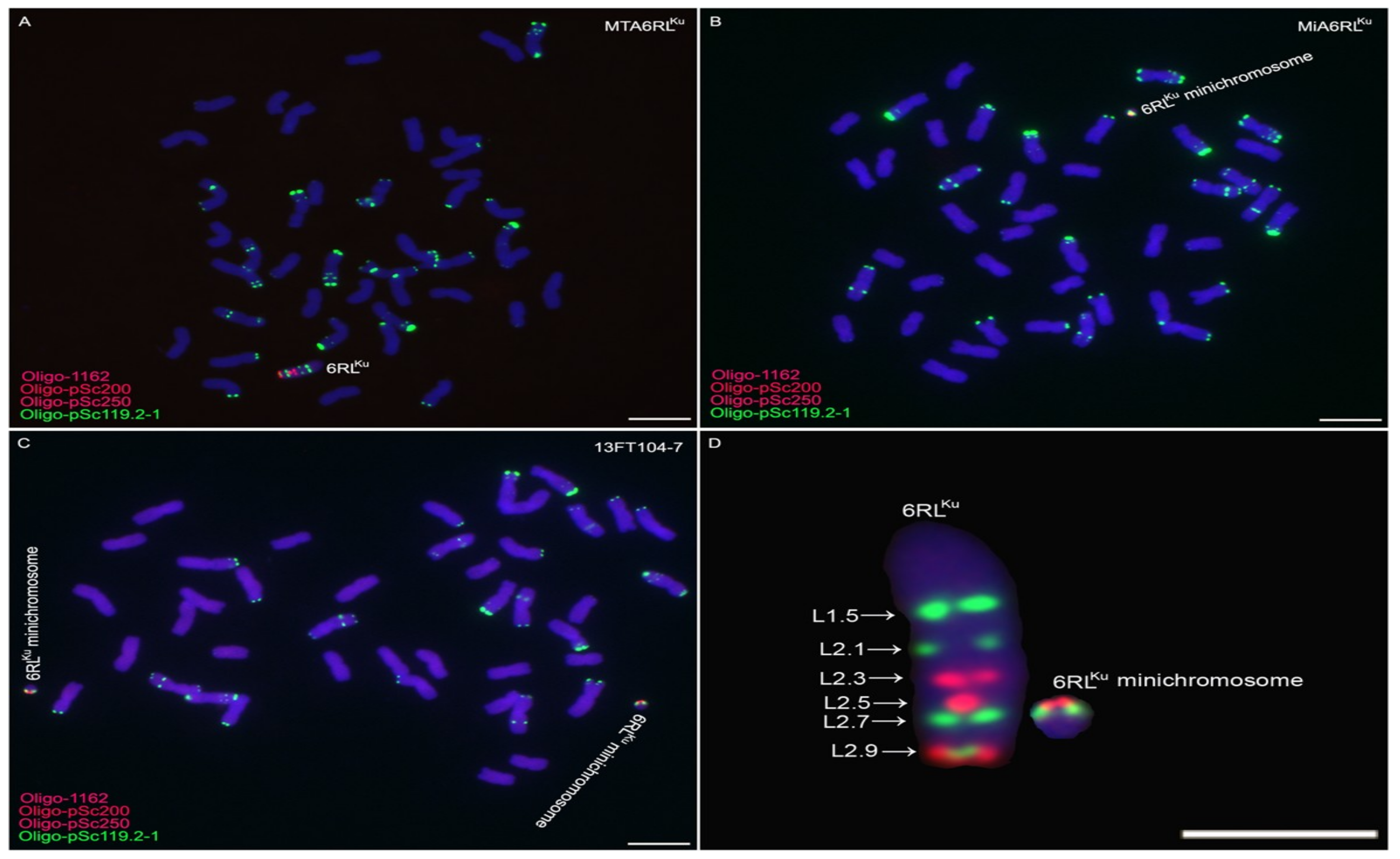 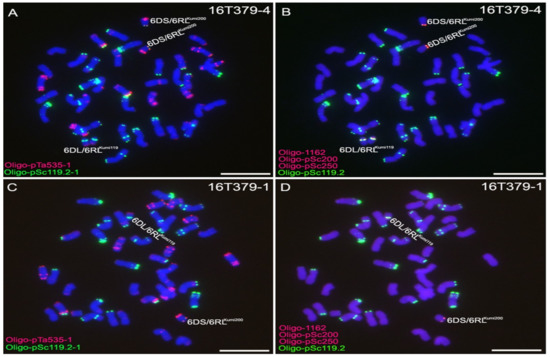