MET/HGF Co-Targeting in Pancreatic Cancer: A Tool to Provide Insight into the Tumor/Stroma Crosstalk
Next Article in Special Issue

RNA splicing patterns in antibody-secreting cells are shaped by endoplasmic reticulum stress, ELL2 (eleven-nineteen lysine-rich leukemia gene 2) induction, and changes in the levels of snRNAs. Endoplasmic reticulum stress induces the unfolded protein response comprising a highly conserved set of genes crucial for cell survival; among these is Ire1, whose auto-phosphorylation drives it to acquire a regulated mRNA decay activity. The mRNA-modifying function of phosphorylated Ire1 non-canonically splices Xbp1 mRNA and yet degrades other cellular mRNAs with related motifs. Naïve splenic B cells will activate Ire1 phosphorylation early on after lipopolysaccharide (LPS) stimulation, within 18 h; large-scale changes in mRNA content and splicing patterns result. Inhibition of the mRNA-degradation function of Ire1 is correlated with further differences in the splicing patterns and a reduction in the mRNA factors for snRNA transcription. Some of the >4000 splicing changes seen at 18 h after LPS stimulation persist into the late stages of antibody secretion, up to 72 h. Meanwhile some early splicing changes are supplanted by new splicing changes introduced by the up-regulation of ELL2, a transcription elongation factor. ELL2 is necessary for immunoglobulin secretion and does this by changing mRNA processing patterns of immunoglobulin heavy chain and >5000 other genes. View Full-Text
Keywords: B cells; RNA splicing; ER stress; unfolded protein response; RIDD B cells; RNA splicing; ER stress; unfolded protein response; RIDD
►▼ Show Figures 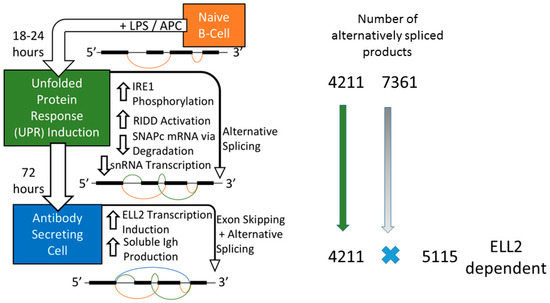