:
Common wheat originated from interspecific hybridization between cultivated tetraploid wheat and its wild diploid relative Aegilops tauschii followed by amphidiploidization. This evolutionary process can be reproduced artificially, resulting in synthetic hexaploid wheat lines. Here we performed RNA sequencing (RNA-seq)-based bulked segregant analysis (BSA) using a bi-parental mapping population of two synthetic hexaploid wheat lines that shared identical A and B genomes but included with D-genomes of distinct origins. This analysis permitted identification of D-genome-specific polymorphisms around the Net2 gene, a causative locus to hybrid necrosis. The resulting single nucleotide polymorphisms (SNPs) were classified into homoeologous polymorphisms and D-genome allelic variations, based on the RNA-seq results of a parental tetraploid and two Ae. tauschii accessions. The difference in allele frequency at the D-genome-specific SNP sites between the contrasting bulks (ΔSNP-index) was higher on the target chromosome than on the other chromosomes. Several SNPs with the highest ΔSNP-indices were converted into molecular markers and assigned to the Net2 chromosomal region. These results indicated that RNA-seq-based BSA can be applied efficiently to a synthetic hexaploid wheat population to permit molecular marker development in a specific chromosomal region of the D genome.
Keywords:
allohexaploid; homoeolog; hybrid necrosis; molecular marker; wheat

Wild relatives of common wheat (Triticum aestivum L.), including Aegilops species, constitute important genetic resources for common wheat breeding. Notably, Aegilops tauschii Coss. is the D-genome progenitor of common wheat, and a limited number of Ae. tauschii strains appear to have contributed to the speciation of common wheat through interspecific crossing to the cultivated tetraploid wheat (Triticum turgidum L. ssp. durum) strains carrying the A and B genomes and subsequent amphidiploidization about 8000 years ago in the Fertile Crescent [1,2]. Artificial replication of this evolutionary process can be achieved by generation of synthetic hexaploid wheat derived from the interspecific crosses between cultivated tetraploid wheat and Ae. tauschii [3]. Thus, agriculturally useful alleles of Ae. tauschii are directly available for common wheat breeding via the transmission from synthetic hexaploid wheat to common wheat [4,5,6,7,8,9,10]. In common wheat, the D genome is known to harbor much lower genetic diversity than do the A and B genomes, whereas introgression of the Ae. tauschii natural variation via synthetic hexaploid wheat has been used successfully to enlarge D-genome diversity [11,12,13,14].
Ae. tauschii is widely distributed, and is present from northern Syria and southeastern Turkey to western China [15,16]. Recent studies on the population structure of Ae. tauschii showed that only one (TauL1) of three major lineages has contributed to the wide species range [2,17,18]. The other two major lineages, TauL2 and TauL3, are restricted to the Transcaucasus/Middle East region. TauL2 includes both subspecies tauschii and subspecies strangulata, and the TauL3 accessions are limited in Georgia [18]. The Ae. tauschii strains associated with the origin of common wheat are assumed to be the TauL2 lineage [2,17], and only limited reproductive barriers are thought to exist between tetraploid wheat and many of the TauL2 accessions [19]. TauL1 accessions frequently carry a hybrid incompatibility gene, designated Net2, that triggers low-temperature-induced necrotic cell death upon interspecific hybridization with tetraploid wheat, impeding the generation of synthetic hexaploid wheat [20,21]. Thus, Net2 is a major reproductive barrier for breeding use of the TauL1 accessions, and the development of markers closely linked to Net2 is needed for efficient use of the TauL1 gene pool. A fine map for the Net2 chromosomal region already has been constructed on the short arm of chromosome 2D [22].
Genomic approaches using next-generation sequencing (NGS) techniques have been applied to analysis of the genomes of the wild relatives of domesticated crops, expanding the genetic resources available for crop improvement [23]. In common wheat, the D-genome markers remain much less developed than those of the A and B genomes, whereas recent progress using the NGS technique has facilitated an increase in the number of D-genome markers [24]. RNA sequencing (RNA-seq) of the Ae. tauschii accessions has generated a huge number of genome-wide polymorphisms, including single nucleotide polymorphisms (SNPs) and insertions/deletions (indels); the genome-wide SNPs and indels can be efficiently anchored to the chromosomes of barley and Ae. tauschii [25,26,27]. The SNP- and indel-based markers are available for construction of linkage maps in the target chromosomal regions of not only Ae. tauschii but also the D genome of hexaploid wheat including synthetic wheat [26,27].
Bulked segregant analysis (BSA) combined with NGS allows efficient development of molecular markers linked to a genomic region associated with the target phenotype in cereals [28,29,30,31]. In maize, for example, an RNA-seq-based BSA approach has been used to construct high-density linkage maps and to screen among candidate genes for a target locus [32,33,34]. Hexaploid wheat has three closely related genomes (designated A, B, and D), each of which carries a set of highly similar genes (homoeology). Due to the genome complexity via allopolyploidy and the large proportion of repetitive DNA in polyploid wheat, whole-genome resequencing is still unviable and reduced-representation methods of NGS data have been employed in this species [35]. Recently, RNA-seq-based BSA was employed successfully for the development of molecular markers closely linked to target chromosomal genes such as a grain protein content gene (GPC-B1), a yellow rust resistance gene (Yr15), and a powdery mildew resistance gene (Pm4b) in tetraploid and common wheat [36,37,38]. However, a limited amount of information has been reported for the RNA-seq-based BSA approach in polyploid wheat. Here, we employed the RNA-seq-based BSA method to develop a molecular marker closely linked to Net2. This process used a mapping population generated from a cross of two synthetic hexaploid wheat lines that shared identical A and B genomes but contained diverse D genomes originating from two distinct pollen parents.

Two synthetic hexaploid wheat lines derived from interspecies crosses of tetraploid wheat cultivar Langdon (Ldn) and two Ae. tauschii accessions (KU-2075 and KU-2025) were used in this study. These lines were produced in our previous study [21]. A synthetic hexaploid line (Ldn/KU-2075) showed normal growth, whereas another synthetic hexaploid line (Ldn/KU-2025) exhibited the type-II necrosis phenotype when grown at low temperature [21]. An F2 mapping population was generated through a cross of the two synthetic hexaploid lines [22]. Subsequently, the F3 and F4 generations were developed from selfing F2 and F3 individuals (respectively) heterozygous for the chromosomal region of Net2, a type-II necrosis-causing gene [22]. Two F5 populations (SP1 and SP2) were generated through selfing of two independent F4 individuals heterozygous for the Net2 region (Figure 1).

Ten Net2-homozygous individuals and ten non-carriers (net2-homozygous) each were selected from the SP1 and SP2 populations. Total RNA was extracted from leaves of each of the forty selected plants at the seedling stage using a Plant Total RNA Extraction Miniprep System (Viogene, Taipei Hsien, Taiwan, ROC). The resulting RNA preparations were pooled independently into four bulk preparations according to the genotype of the Net2 region and to the SP source population (Net2-SP1, non-carrier-SP1, Net2-SP2, and non-carrier-SP2). A total of 8 μg of each bulk preparation of RNA was used to construct paired-end libraries using TruSeq RNA Library Preparation Kit v2 (Illumina, San Diego, CA, USA). The libraries were sequenced twice for 300 cycles × 2 on an Illumina MiSeq sequencer with 300-bp paired-end reads. The read data was deposited to the DDBJ Sequence Read Archive under the accession number DRA007501. RNA sequencing data of Ldn, which was obtained in our previous report [43] and deposited under the accession number DRA007097, also was used for the subsequent analysis.

Low-quality bases (average Phred quality score per 4 bp < 30), adapter sequences, and reads < 100 bp were removed from the short reads using the Trimmomatic version 0.32 tool [44]. RNA-seq analysis of KU-2075 and KU-2025 for de novo transcriptome assembly was described in our previous study [27], and the corresponding sequencing data was obtained from the DDBJ Sequence Read Archive DRA004604. The quality-filtered reads of each bulk and Ldn were aligned to the transcripts of KU-2075 and KU-2025 using the Bowtie2 tool [45] with local alignment, obtaining bam outputs.

After merging the two bam files of each bulk library using SAMtools software (version 1.9; La Jolla, CA, USA) with the command “samtools merge”, SNPs were called from the alignment files using SAMtools and Coval software (version 1.5; Iwate, Japan) with option “-freq 0.1 -m 1000000 -n 10” [46,47]. The bam files of the synthetic hexaploid bulks were supposed to hold homoeologous polymorphisms and allelic variations on the D genome, whereas the alignment outputs of Ldn would contain homoeologous polymorphisms only. We assumed that, of the SNPs derived from the bulks, SNPs also detected in the pairwise comparison of KU-2075 and KU-2025 would represent D-genome specific polymorphisms, and SNPs also found in the alignment files of Ldn would represent homoeologous polymorphisms. The transcript sequences of the two Ae. tauschii accessions were mapped to the reference genome of Ae. tauschii [39] using GMAP version 2013-03-31 software (South San Francisco, CA, USA) [48,49], and the identified SNPs were anchored to the Ae. tauschii genome based on the GMAP outputs. The allele frequency at the SNP sites, a value designated as the SNP-index [28,29], was calculated in each of the eight respective alignment pairs, and the difference in the SNP-index values of the contrasting bulks (Net2-homogenous minus non-carrier bulk alignment, e.g., Net2-SP1-KU-2075 minus non-carrier-SP1-KU-2075) was defined as the ΔSNP-index by analogy to the work of Takagi et al. [29]. RStudio ver. 0.99.902 [50] with R software ver. 3.3.1 [51] was used for statistical analyses and ΔSNP-index plotting of the Ae. tauschii chromosomes.

In our previous study [22], the Net2 locus was fine-mapped within a 0.6-cM region on the short arm of chromosome 2D. The two most closely linked markers were assigned to the Ae. tauschii genome [39] using the BLASTN search function of the BLAST+ software (Bethesda, MD, USA) [52] to define the physical region where the Net2 locus was assumed to reside. D-genome-specific SNPs of high ΔSNP-index values within this chromosomal region were converted into derived cleaved amplified polymorphic sequence (dCAPS) markers (Table 4), and these novel markers were used to genotype 788 individuals of the Ldn/KU-2025//Ldn/KU-2075 population, as described in our previous report [22]. The genotyped markers were assigned to the genetic map around Net2 using the MAPMAKER/EXP version 3.0 package (Cambridge, MA, USA) [53].

This work was supported by grants from the Ministry of Education, Culture, Sports, Science and Technology of Japan (MEXT; Grant-in-Aid for Scientific Research (B) No. 16H04862 and Grant-in-Aid for Scientific Research on Innovative Areas No. 17H05842) to ST; by a Research Fellowship from the Japan Society for the Promotion of Science for Young Scientists (No. 16J03477) to RN; and by MEXT as part of a Joint Research Program implemented at the Institute of Plant Science and Resources, Okayama University, Japan. KY was supported by the Japan Science and Technology Agency, PRESTO (No. JPMJPR15QB).

The Ae. tauschii seeds used in this study were supplied by the National BioResource Project-Wheat (http://shigen.nig.ac.jp/wheat/komugi/). 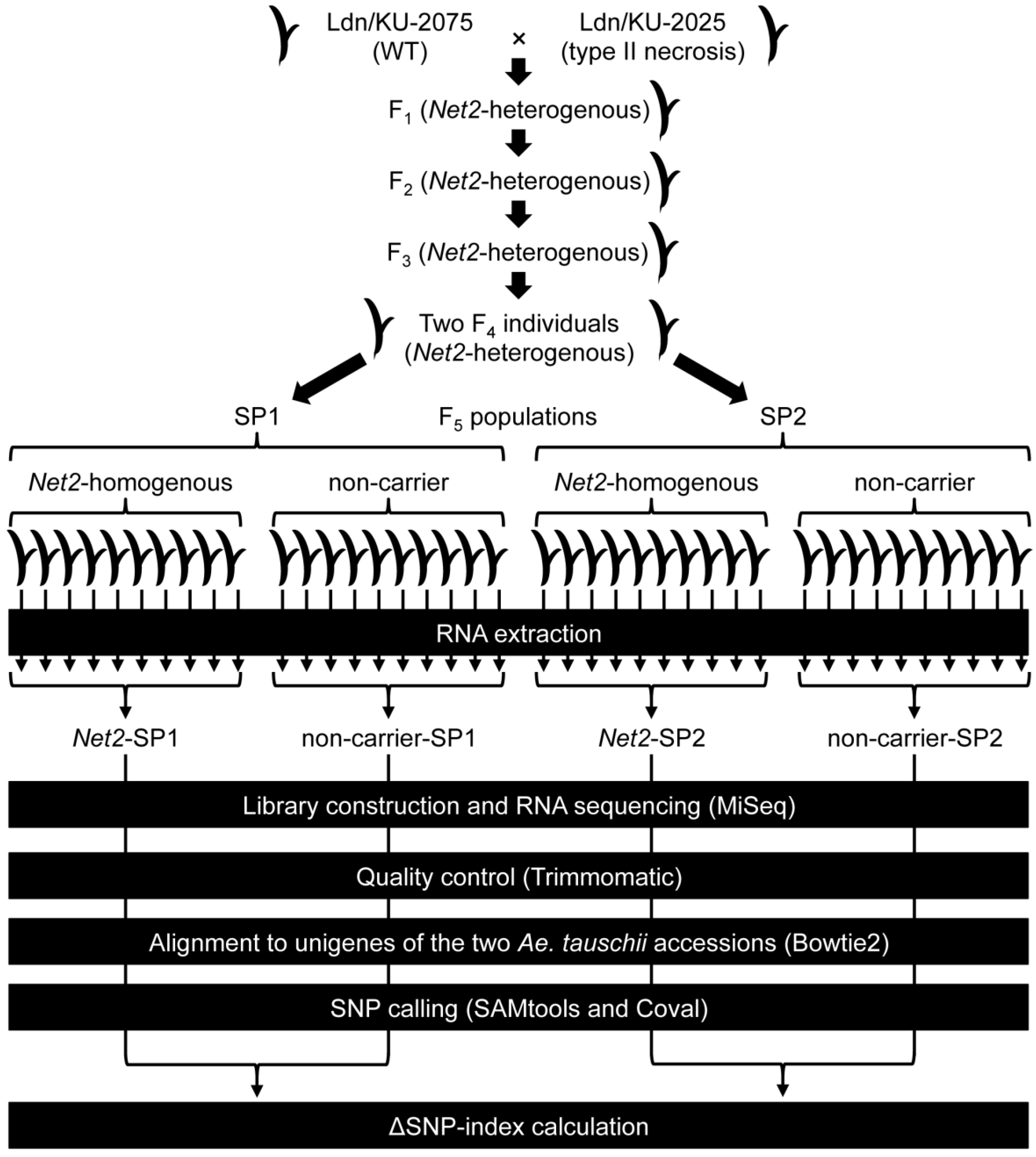 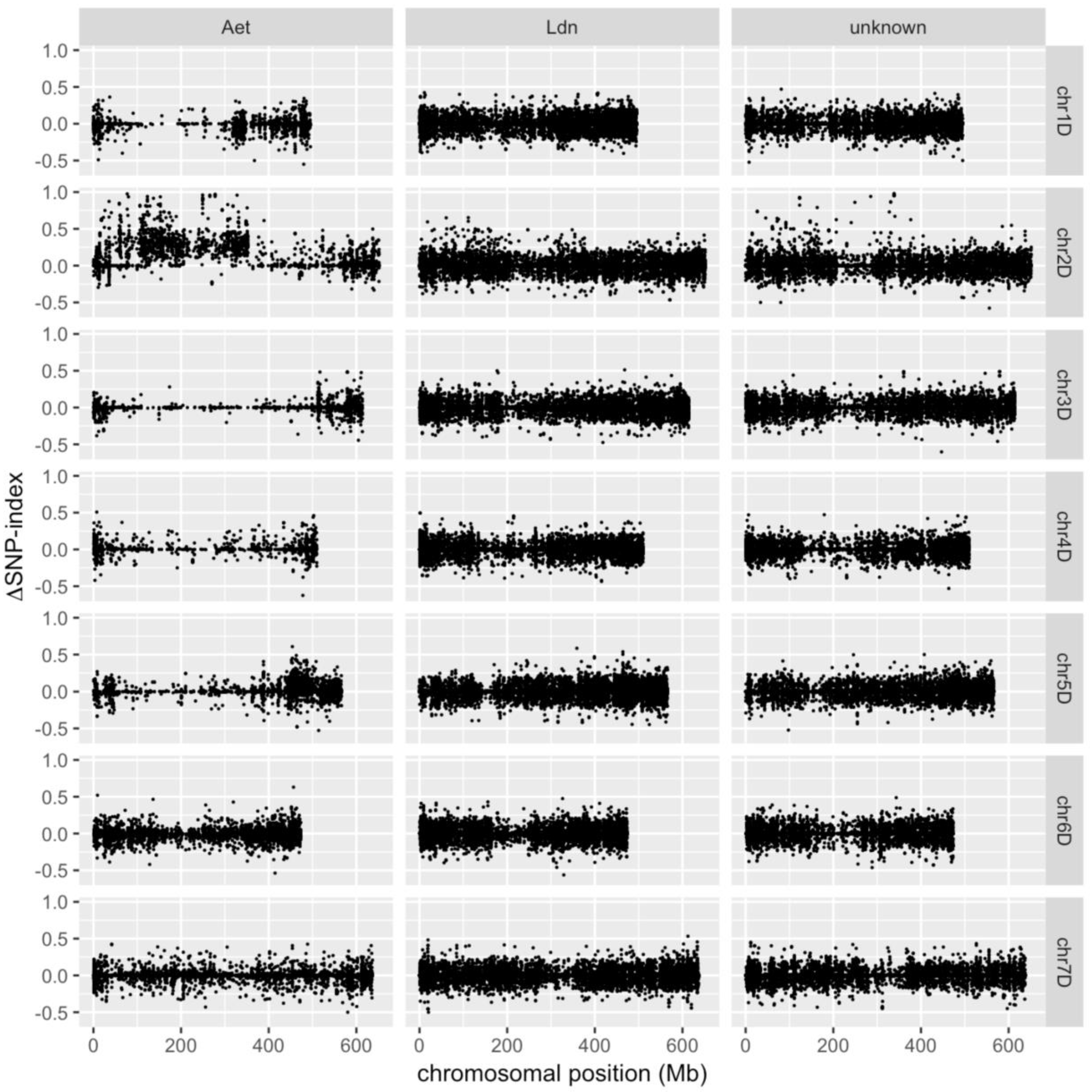