Synthetic hexaploid wheat (SHW; Triticum durum L. × Aegilops tauschii Coss.) is a means of introducing novel genes/genomic regions into bread wheat (T. aestivum L.) and a potential genetic resource for improving grain mineral concentrations. We quantified 10 grain minerals (Ca, Cd, Cu, Co, Fe, Li, Mg, Mn, Ni, and Zn) using an inductively coupled mass spectrometer in 123 SHWs for a genome-wide association study (GWAS). A GWAS with 35,648 single nucleotide polymorphism (SNP) markers identified 92 marker-trait associations (MTAs), of which 60 were novel and 40 were within genes, and the genes underlying 20 MTAs had annotations suggesting a potential role in grain mineral concentration. Twenty-four MTAs on the D-genome were novel and showed the potential of Ae. tauschii for improving grain mineral concentrations such as Ca, Co, Cu, Li, Mg, Mn, and Ni. Interestingly, the large number of novel MTAs (36) identified on the AB genome of these SHWs indicated that there is a lot of variation yet to be explored and to be used in the A and B genome along with the D-genome. Regression analysis identified a positive correlation between a cumulative number of favorable alleles at MTA loci in a genotype and grain mineral concentration. Additionally, we identified multi-traits and stable MTAs and recommended 13 top 10% SHWs with a higher concentration of beneficial grain minerals (Cu, Fe, Mg, Mn, Ni, and Zn), a large number of favorable alleles compared to low ranking genotypes and checks that could be utilized in the breeding program for the genetic biofortification. This study will further enhance our understanding of the genetic architecture of grain minerals in wheat and related cereals. View Full-Text
Keywords: Triticum durum; Aegilops tauschii; Triticum aestivum; marker-trait associations; genes; bread wheat; genetic biofortification; favorable alleles Triticum durum; Aegilops tauschii; Triticum aestivum; marker-trait associations; genes; bread wheat; genetic biofortification; favorable alleles
►▼ Show Figures 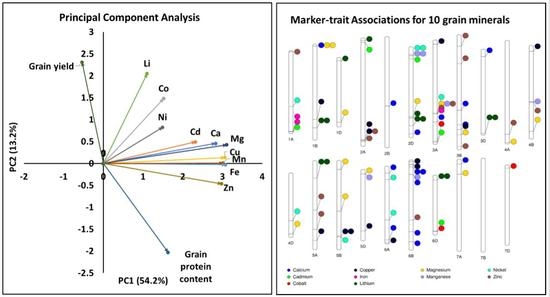