Insect Transcription Factors: A Landscape of Their Structures and Biological Functions in Drosophila and beyond
Previous Article in Journal

Transcription control plays a crucial role in establishing a unique gene expression signature for each of the hundreds of mammalian cell types. Though gene expression data have been widely used to infer cellular regulatory networks, existing methods mainly infer correlations rather than causality. We developed statistical models and likelihood-ratio tests to infer causal gene regulatory networks using enhancer RNA (eRNA) expression information as a causal anchor and applied the framework to eRNA and transcript expression data from the FANTOM Consortium. Predicted causal targets of transcription factors (TFs) in mouse embryonic stem cells, macrophages and erythroblastic leukaemia overlapped significantly with experimentally-validated targets from ChIP-seq and perturbation data. We further improved the model by taking into account that some TFs might act in a quantitative, dosage-dependent manner, whereas others might act predominantly in a binary on/off fashion. We predicted TF targets from concerted variation of eRNA and TF and target promoter expression levels within a single cell type, as well as across multiple cell types. Importantly, TFs with high-confidence predictions were largely different between these two analyses, demonstrating that variability within a cell type is highly relevant for target prediction of cell type-specific factors. Finally, we generated a compendium of high-confidence TF targets across diverse human cell and tissue types. View Full-Text
Keywords: transcription regulation; gene expression; causal inference; enhancer activity transcription regulation; gene expression; causal inference; enhancer activity
►▼ Show Figures 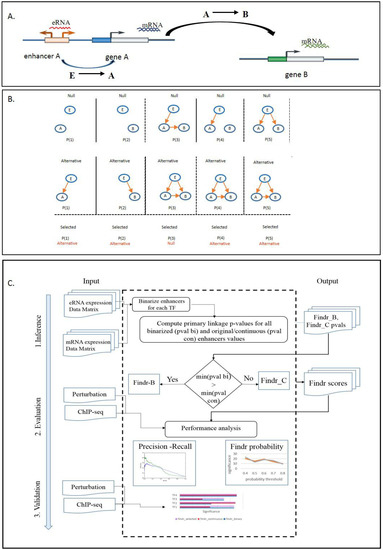