Colorectal cancer (CRC) is currently the third and the second most common cancer in men and in women, respectively. Every year, more than one million new CRC cases and more than half a million deaths are reported worldwide. The majority of new cases occur in developed countries. Current screening methods have significant limitations. Therefore, a lot of scientific effort is put into the development of new diagnostic biomarkers of CRC. Currently used prognostic markers are also limited in assessing the effectiveness of CRC therapy. MicroRNAs (miRNAs) are a promising subject of research especially since single miRNA can recognize a variety of different mRNA transcripts. MiRNAs have important roles in epigenetic regulation of basic cellular processes, such as proliferation, apoptosis, differentiation, and migration, and may serve as potential oncogenes or tumor suppressors during cancer development. Indeed, in a large variety of human tumors, including CRC, significant distortions in miRNA expression profiles have been observed. Thus, the use of miRNAs as diagnostic and prognostic biomarkers in cancer, particularly in CRC, appears to be an inevitable consequence of the advancement in oncology and gastroenterology. Here, we review the literature to discuss the potential usefulness of selected miRNAs as diagnostic and prognostic biomarkers in CRC. View Full-Text
Keywords: colorectal; cancer; microRNA; biomarkers colorectal; cancer; microRNA; biomarkers
►▼ Show Figures 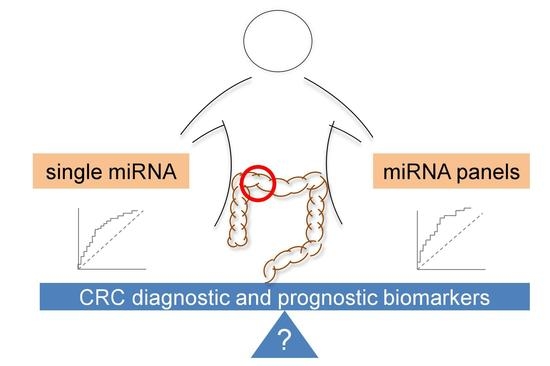