Studies on the pathogenesis of obesity-related complications point to adipose tissue as the main source of mediators involved in pathological changes of the whole-body function. Transcriptome analyses confirmed substantial aberrations in gene expression in the adipose tissues of obese subjects compared to normal-weight individuals [1,2,3,4]; however, molecular mechanisms underlying this phenomenon remain largely unknown.
In recent years there has been great progress in understanding the role of microRNA (miRNA) in the regulation of the expression of various genes, including those related to adipocyte differentiation and function. miRNAs implicated in adipogenesis and adipocyte metabolism were found to be differentially expressed in adipose tissue from obese subjects and from normal-weight controls [1,5,6,7,8] as well as in different adipose tissue depots [9]. However, these studies were performed with microarrays covering only canonical miRNA sequences deposited in databases. Next generation sequencing (NGS) allows for the identification of novel isoforms of miRNA, and has been successfully used for the analysis of miRNomes in other tissues [10,11].
Precise characterization of miRNome may serve as a basis for identification of cellular functions and pathways disturbed in the course of the investigated pathology [12]. Therefore, we have applied NGS for the identification of miRNAs, the expression of which varies between different adipose tissue depots of obese individuals before and after weight loss, as well as between obese and normal-weight individuals. We have also performed bioinformatics analysis in order to identify gene targets and, subsequently, pathways affected by obesity-related changes in miRNA expression in adipose tissue.

2.2. Weight Loss Is Associated with Change of the SAT miRNA Profile

Real-time PCR (RT-PCR) positively confirmed the obesity-associated expression changes of the selected miRNAs detected by NGS (Table 1 and Table 2). On the other hand, out of three miRNAs with the most stable expression in NGS, only hsa-miR-374a-5p had comparable levels in adipose tissues regardless of weight and weight changes when assessed by real-time PCR, while hsa-miR-214-3p and hsa-miR-342-3p levels were significantly higher in SAT-PO than in SAT-O, indicating that they cannot be used as internal control for miRNA testing in adipose tissue.

Using the MirWalk and MirTarBase programs, we searched for genes regulated by miRNAs whose expression in adipose tissue was significantly (fold change at least >2 or <−2) affected by obesity and weight loss. We identified 9932 putative gene targets for miRNAs differentially expressed in SAT-O and SAT-N, 16158 targets for miRNAs differentially expressed in SAT-PO and SAT-O, 17186 targets of miRNAs whose levels differed significantly between SAT-PO and SAT-N, and 15565 targets regulated by miRNAs differentially expressed in VAT-O and SAT-O. Analysis of targets was performed separately for each abovementioned pair of tissues. Notably, targets with a known function in obesity (Table 3) were among those with the highest (>10) number of binding sites for miRNAs characterized by differential expression.
Next, we used our estimation method described in the Methods section to evaluate the direction of the expression changes of 10 putative targets that might have been affected by the obesity-related changes in miRNA levels. For this analysis we selected BMPR2 (encoding bone morphogenic protein receptor 2), CABP4 (encoding calcium binding protein 4), CFL2 (encoding cofilin 2), DBT (encoding lipoamide acyltransferase component of branched-chain alpha-keto acid dehydrogenase complex), DISC1 (encoding disrupted in schizophrenia 1), DOK1 (encoding docking protein 1), FOXP1 (encoding forkhead box protein P1), IGF1R (encoding insulin-like growth factor receptor 1), MTMR12 (encoding myotubularin related protein 12) and TRIM14 (encoding tripartite motif-containing protein 14) whose expression, based on the miRNA analysis, should be affected in all analyzed pairs of tissues. In order to establish the relevance of the above analysis, we measured the expression of these targets by real-time PCR. We found that in each case the direction of expression changes predicted by our estimation method agreed with the experimental data (Table S1).
Apart from obesity-related genes (Figure 1a), among potential targets for miRNAs differentially expressed in the investigated tissues were also those associated with obesity-related complications including diabetes (Figure 1b), oxidative stress (Figure 1c) and atherosclerosis (Figure 1d).

To identify the molecular pathways associated with a change in the obesity-related miRNome, we employed the PANTHER Classification System. When potentially affected targets were taken into account, 49 pathways were indicated (a summary of the most relevant results is presented in Table 4), some of them overrepresented, some underrepresented, suggesting that obesity is associated with either greater or lower than expected, respectively, regulation of a given pathway by these miRNAs. Among the pathways, only three passed the Bonferroni correction (Table 4).

Pairs of visceral (VAT) and subcutaneous (SAT) adipose tissues were obtained from 58 obese patients (O, body mass index (BMI) > 40 kg/m2) during bariatric surgery, as described previously [38]. Fifty-five control tissues were collected from normal-weight individuals (N, BMI 20–24.9 kg/m2) undergoing elective cholecystectomy (24 samples of VAT and 24 samples of SAT) or operated for inguinal hernia (seven samples of SAT). Nineteen additional samples of SAT were collected from formerly obese subjects about two years after surgery-induced weight loss (PO, BMI 24.3–29.5 kg/m2). VAT samples from the PO subjects were unavailable since post-bariatric surgery regards only skin fold removal and is not associated with abdominal cavity opening. Basic clinical characteristics of study participants are summarized in Table S2. The project was approved by the Bioethics Committee of the Medical University of Warsaw, and written informed consent for participation in this study was obtained from all participants.

After collection, all adipose tissue samples were immediately frozen at −80 °C, homogenized in liquid nitrogen and stored again at −80 °C. The previously described methods [20] were used for total RNA isolation. RNA integrity was assessed using an Agilent 2100 Bioanalyzer (Agilent Technology, Santa Clara, CA, USA). For NGS, only samples with the highest quality and integrity (RNA integrity number (RIN) > 8) were selected, so this analysis was performed on 44 tissues: 10 pairs of VAT and SAT from the obese study participants (O, eight women, two men), seven pairs of VAT and SAT from normal-weight subjects (N, six women, one man) and 10 SAT samples from individuals after surgery-induced weight loss (PO, eight women, two men).
A small fraction of RNA was isolated, sequenced and analyzed as described previously [10]. Data obtained for each sample were normalized using the RPM normalization according to the formula: RPM = (Nref/Nall) × 106, where Nref is the number of reads mapped to the miRNA reference and Nall is the total number of reads mapped to the sample.

4.4. Identification of miRNA Target Genes and Their Molecular Pathways

The MirWalk (http://zmf.umm.uni-heidelberg.de/apps/zmf/mirwalk2) and MirTarBase (http://mirtarbase.mbc.nctu.edu.tw) programs were used to identify target genes regulated by miRNAs with differential expression [39,40,41,42].
Putative target genes were first identified by miRWalk which utilizes a restrictive algorithm to predict mRNA-miRNA interaction sites by comparing the complete nuclear genes and mitochondrial DNA sequences with miRNA 7-nucleotide seed region and by calculating the probability distribution of random matches of a subsequence from the 5′ end of miRNA sequence, using the Poisson distribution. Next, the program compared the obtained results with results from other popular prediction programs: DIANA-microT, miRanda, miRDB, PicTar, Probability of Interaction by Target Accessibility (PITA), RNA22, RNAhybrid and TargetScan/TargetScanS. This analysis was complemented by data from the Advanced Search tool from MirTarBase containing interaction sites that had been verified by functional tests (reporter assay, immunoblot, qPCR, microarray, protein stable isotope labeling with amino acids in cell culture (pSILAC), cross-linking immunoprecipitation followed by sequencing (CLIP-seq)).
A rough estimation of the direction of target gene expression changes was obtained as follows: when miRNA had a lower expression in a given tissue than in another tissue with which it was compared, we assigned the value of +1 to the expression of its target gene and opposite, when miRNA expression was higher than in the other tissue, we assigned the value of −1. For each gene, the respective values were summarized. When the sum had a positive value, we considered the expression of the gene to be increased, while a negative value indicated gene suppression. Results of this estimation were verified for 10 genes (enlisted in the Results section) by real-time PCR as described previously, with specific primers enlisted in Table S3 [38].
Subsequently, target genes were analyzed with the PANTHER (Protein ANalysis THrough Evolutionary Relationships) Classification System v. 11.0 (Paul Thomas Lab, Los Angeles, CA, USA) combining gene functions, ontology and pathways [43]. Based on this analysis, molecular pathways that were regulated by miRNAs with differential expression were identified. Differences in the regulation of pathways were presented as fold enrichment. Fold enrichment values >1 corresponded to the overrepresentation (increased regulation) of the particular pathway, while values <1 to its underrepresentation (decreased regulation) as compared to control tissue from a given pair of tissues. 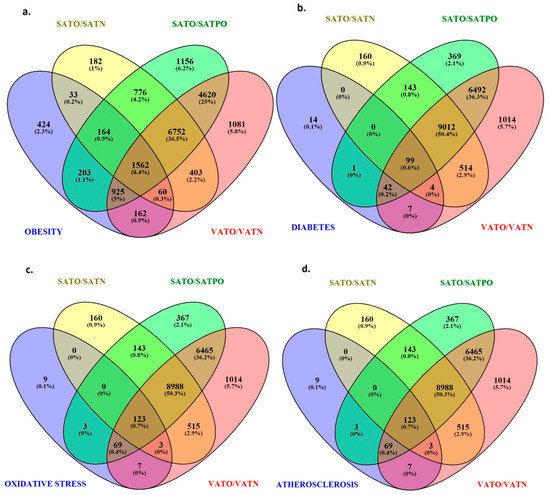 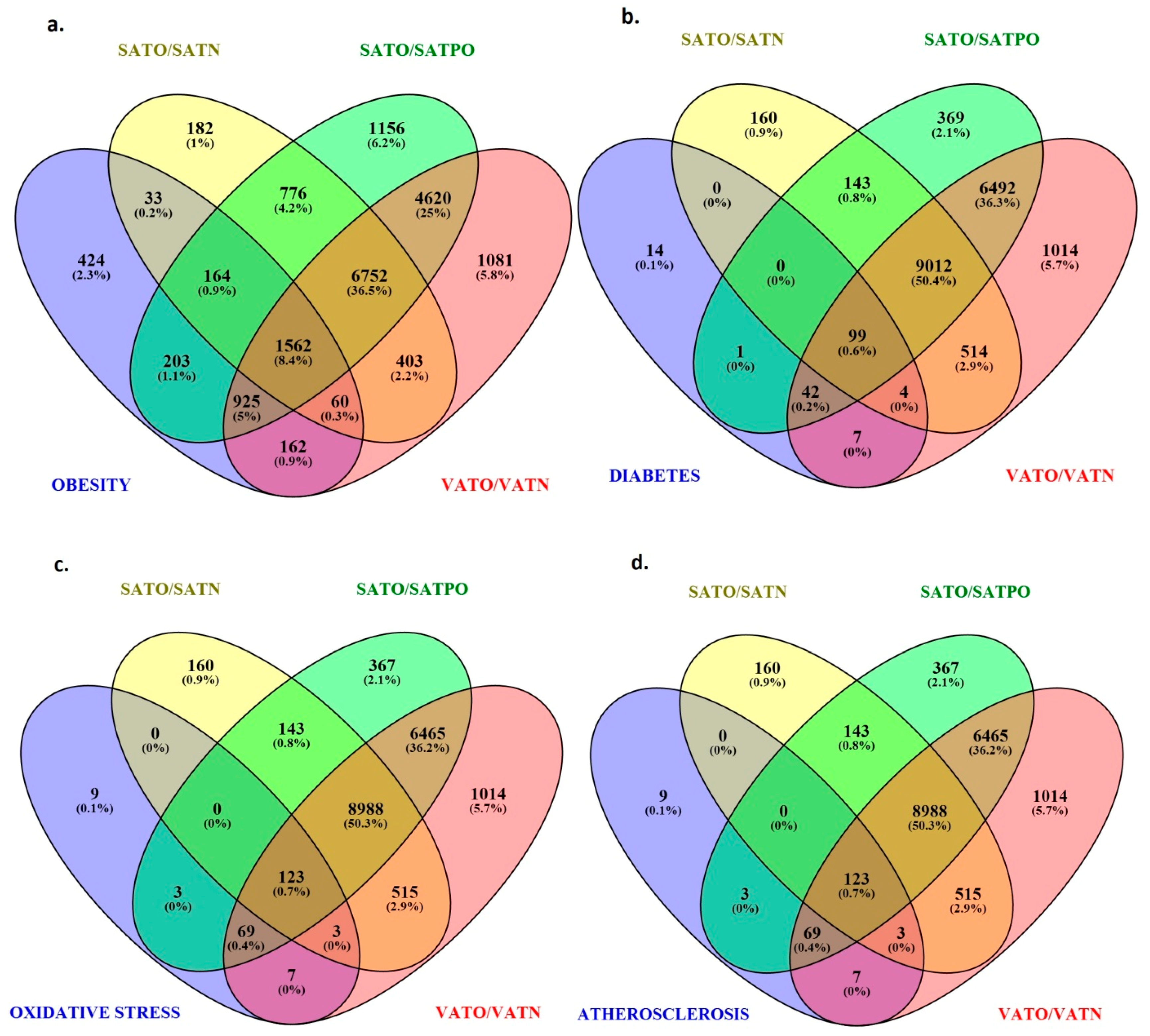