Microglia and Aging: The Role of the TREM2–DAP12 and CX3CL1-CX3CR1 Axes
Previous Article in Special Issue

The first case of Aα-chain amyloidosis was described by Benson et al. [4] in 1993 in a Peruvian-Mexican population, segregating with a mutation in FGA as R554L. Aα-chain amyloidosis is characterized by excessive amyloid deposition preferentially in the renal glomeruli and clinically presents as proteinuria, hypertension, and azotemia [2]. Involvement of the liver and spleen may be observed in advanced cases of Aα-chain amyloidosis; however, excessive amyloid accumulation in the glomeruli is the most remarkable feature of this disease [2]. Moreover, amyloid deposits result in atherosclerosis or cardiomyopathy in some patients [17,18]. A previous study reported that clinical symptoms of Aα-chain amyloidosis usually begin from the fourth to the ninth decade of life and that the median time from the progression of proteinuria to end-stage renal disease (ESRD) is 4.6 years [13]. However, some patients develop Aα-chain amyloidosis symptoms from the first or the second decade of life [11,12]. Most patients with Aα-chain amyloidosis do not have any family history of renal disease or amyloidosis because of the variable penetrance of this disease [13]. Therefore, a sporadic case of Aα-chain amyloidosis may be frequently misdiagnosed as primary AL amyloidosis [19]. To date, 16 amyloidogenic FGA variants have been reported, of which seven are missense mutations and nine are deletion or insertion-deletion mutations (Table 1) [4,9,10,11,12,13,14,15,16]. Of the nine deletion or insertion-deletion mutations, eight result in an out-frameshift mutation. E526V is the most common variant detected in patients across the world [2,9,13,17,20,21] (Table 1). Most patients with Aα-chain amyloidosis are heterozygous for the E526V variant; however, a recent study reported a Portuguese patient who was homozygous for the E526V variant [22]. While a genotype-phenotype correlation has not been investigated in detail, all described amyloidogenic mutations have been found to be associated with renal amyloidosis [2,13]. In addition, patients with Aα-chain amyloidosis having frameshift variants seem to show earlier disease onset (median age, 30 years) than those with single amino acid substitutions (median age, 59 years) [15].

4. The First Case of Aα-Chain Amyloidosis in Japan: Clinical and Molecular Features

In Japan, the vast majority (over 90%) of patients with hereditary systemic amyloidosis are transthyretin-related familial amyloid polyneuropathy (hereditary ATTR amyloidosis). More than 300 patients are assumed to exist in Japan, and those patients usually present with severe peripheral and autonomic neuropathy, cardiomyopathy gastroenteropathy, and/or oculopathy. However, no patient with hereditary non-neuropathic renal amyloidosis (Ostertag-type amyloidosis) had been reported in Japan until we reported the sporadic case of a patient with Aα-chain amyloidosis having a novel frameshift variant (4899_4902delAGTG) in 2015 [14]. This patient was a 40-year-old woman with rapidly deteriorating nephropathy [14]. The patient developed proteinuria at the age of 32 years, and renal biopsy showed excessive amyloid deposits in her glomeruli (Figure 1A,B). The patient did not have any overt signs of neuropathy, cardiomyopathy, oculopathy, or gastroenteropathy; however, gastroduodenal biopsy showed small amount of amyloid accumulation in the duodenal mucosa (Figure 1C,D). The plasma fibrinogen level of the patient was within the normal range (254 mg/dL; normal range, 180–350 mg/dL), and she did not show coagulopathy. Abdominal fat pad biopsy and liver biopsy did not show the presence of amyloid deposits (data not shown). Initially, the patient was diagnosed with primary AL amyloidosis. However, her renal function deteriorated rapidly despite treatment with combined chemotherapies, and she developed ESRD at 18 months after the detection of proteinuria. Eight years after the onset, a definite diagnosis of Aα-chain amyloidosis was made by proteomics analysis of glomerular amyloid on renal sample biopsied at 32 years, using laser microdissection (LMD) and liquid chromatography tandem mass spectrometry (LC-MS/MS) [14]. Proteomics analysis detected several tryptic peptides in accordance with the C-terminal region of Aα-chain (Figure 2). In addition, proteomics analysis detected two tryptic peptides, namely, LSLGAQNLASSQIQR and NPVLITLG, that corresponded to the previously described sequences of the C-terminal region of a fibrinogen variant (position 525–547) induced by a frameshift mutation (4904delG [10]) (Figure 2). Proteomics analysis did not detect a wild-type Aα-chain sequence after position 523, indicating that amyloid fibrils in our patient were only composed of the variant Aα-chain fragment. Moreover, proteomics analysis did not detect other tryptic peptides before position 430, suggesting that the N-terminus of the amyloid protein was present around position 430 (Figure 2). To obtain more information on the N-terminus of the amyloid protein, we biochemically investigated the amyloid fibril protein isolated from frozen duodenal mucosa samples by performing methods reported previously [24] and detected several peptides generated by Arg-C peptidase (Figure 2). We also detected a fragment starting with the amino acid residue Thr at position 411, but could not detect peptides before position 410. Therefore, we assumed that Thr411 was the N-terminus and that the amyloid protein was composed of Aα-chain fragments with wild-type (positions 411–522) and abnormal sequences (position 523–546) (Figure 2). However, we did not detect any wild-type sequence after residue 523. This result indicated that the wild-type Aα-chain sequence did not contribute to amyloid formation in our patient, as that observed in another patient with 4897delT [11]. SDS-PAGE showed that the molecular weight of the amyloid fibril protein was approximately 12 kDa (unpublished observation).

One of the most notable clinical features of Aα-chain amyloidosis in Asia is that it may still be a quite rare disease, as mentioned above, and only a few Asian patients have been found to date, solely in East Asian countries [12,13,14,23]. Nephropathy is the main clinical manifestation in Asian patients with Aα-chain amyloidosis, which is similar to that observed in patients with Aα-chain amyloidosis in other countries. Moreover, Asian and Western patients with Aα-chain amyloidosis show similar renal pathological findings, including excessive amyloid deposits in the glomeruli [12,14]. Genetically, the five Asian patients with Aα-chain amyloidosis had five different genetic mutations, of which four were novel (Table 1). E526V, the most common variant in patients with Aα-chain amyloidosis in Western countries, was detected in only one Chinese patient with Aα-chain amyloidosis [23]. The other four mutations detected in the remaining Asian patients with Aα-chain amyloidosis have not been reported in patients with Aα-chain amyloidosis in other countries to date.
Fibrinogen is a 340-kDa plasma glycoprotein that plays a major role in blood coagulation by converting to fibrin [25,26]. It is composed of two identical subunits, each of which contains an Aα-, Bβ-, and γ-chain and is produced by hepatocytes. Mature Aα-chain contains 610 amino acids and has a molecular weight of approximately 66 kDa [27]. The detailed pathomechanism underlying amyloid formation from the Aα-chain remains unclear. Interestingly, all amyloidogenic variants, including the eight frameshift mutations, are present in a specific region of the Aα-chain from residues 517 to 555 (Figure 3). These data clearly suggest that the location of FGA mutations is a key factor in amyloid formation. However, because five single amino acid substitutions (Available online: www.geht.org/databaseang/fibrinogen/), such as R554C [28] and R554H [15] at position 517–555, do not induce amyloid formation, it is likely that amyloid formation strongly depends on both the location of the variants and the type of replaced amino acids. In addition, of particular interest in the eight frameshift variants is that the C-terminal sequences resulting from all mutations bear a close resemblance to each other (Figure 3). In fact, C-terminal peptides containing 24 amino acids (SLGAQNL.....VLITLG) are identical among all of the frameshift variants, suggesting that this common sequence may be essential for amyloid formation. A recent study reported the importance of the C-terminal sequence composed of five amino acids (VLITL) in amyloidogenesis [16]. This common sequence may be attributed to the number of deleted nucleotides explained by arithmetical progression (1 + 3[n − 1]). In addition, it seems to be important that the location of nucleotide deletion should be after TAG within Leu518 (TTA) and Gly519 (GGA), or all nucleotides at position 518 and 519 are deleted, according to the mutation reported by Kang et al. [12]. Indeed, one nucleotide deletion (delC) at position Ala499 (GCC) generated a premature stop codon (TAG) at position 518, and this mutation was non-amyloidogenic [29]. On the other hand, in amyloid proteins associated with frameshift mutations, the length of the wild-type amino acid sequence in the N-terminus seems to vary in each case. In our patient, the presumable start point was Thr411 and the amyloid protein was assumed to contain 136 amino acids (411–546), with a molecular weight of approximately 12 kDa (Figure 2). In contrast, the putative starting point in an amyloid protein associated with 4897delT was assumed to be around Ala499, and its molecular weight was found to be 5 kDa [11]. Therefore, the production of a fragment containing an appropriate length of the wild-type Aα-chain sequence and an additional 24 common C-terminal residues seems to be important for amyloid formation. It was assumed that the variant Aα-chain containing 546 amino acid residues, which was detected in our patient with a 4-bp deletion [14], was more unstable and could be more easily degraded than the normal Aα-chain, as reported in other frameshift variants [10]. However, because no amyloid deposits were seen within or outside hepatocytes in our patient, it is possible that the variant Aα-chain was secreted by hepatocytes without intracellular aggregation. Therefore, at least in our patient, amyloid formation seemed to be strongly dependent on some proteolytic events after secretion from hepatocytes. In the variant Aα-chain with a single amino acid substitution (R554L), the amyloid protein consisted of a fragment containing variant Aα-chain residues 500–580 [4]. Serpell et al. [30] described the importance of residues 500–521 in amyloidogenesity because this portion was also present in a frameshift variant (4897delT) [11]. This portion was also detected in our patient (Figure 2). This suggests that an amyloidogenic fragment of an appropriate length for fibril formation generated from a variant Aα-chain through an aberrant proteolytic event is important for amyloid formation. However, mechanisms underlying the generation of amyloidogenic fragments or their escape from further processing are unclear, and further in vivo or in vitro investigations should be performed to address these questions.
Thus, more patients with Aα-chain amyloidosis may be present in Asia. However, the majority of these patients may have been misdiagnosed with other types of systemic amyloidosis. Asian and European patients with Aα-chain amyloidosis do not show remarkable differences with respect to clinical manifestations; however, the most prevalent genetic variant E526V in European patients may not be common in Asian patients. Recently, several effective therapies have been established for treating different types of systemic amyloidosis; however, the therapeutic strategy for treating each type of amyloidosis is different [13,17,31,32,33,34,35,36,37,38,39,40,41,42] (Table 2), highlighting the importance of the correct diagnosis of the disease at an early stage. Moreover, the possibility of Aα-chain amyloidosis should always be considered in sporadic cases of amyloid nephropathy, even in Asian countries. In our patient, proteomic analysis by performing LMD and LC-MS/MS not only helped in making the correct diagnosis, but also helped in obtaining information on the whole sequence of the amyloid fibril protein by using small sections of an old formalin-fixed, paraffin-embedded tissue sample obtained from the patient [14]. 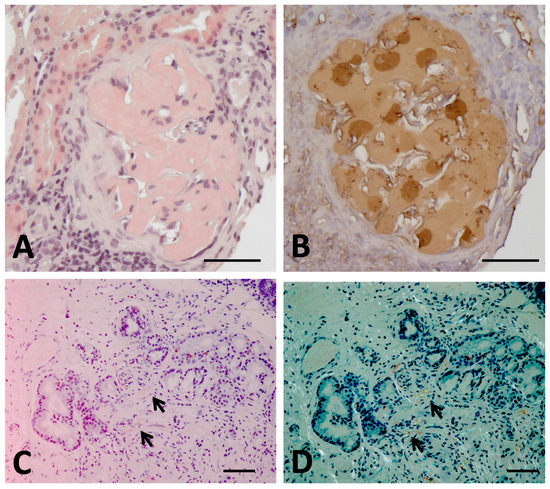 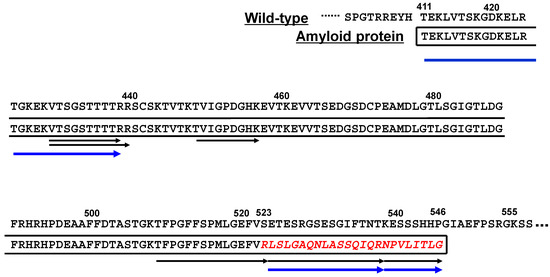 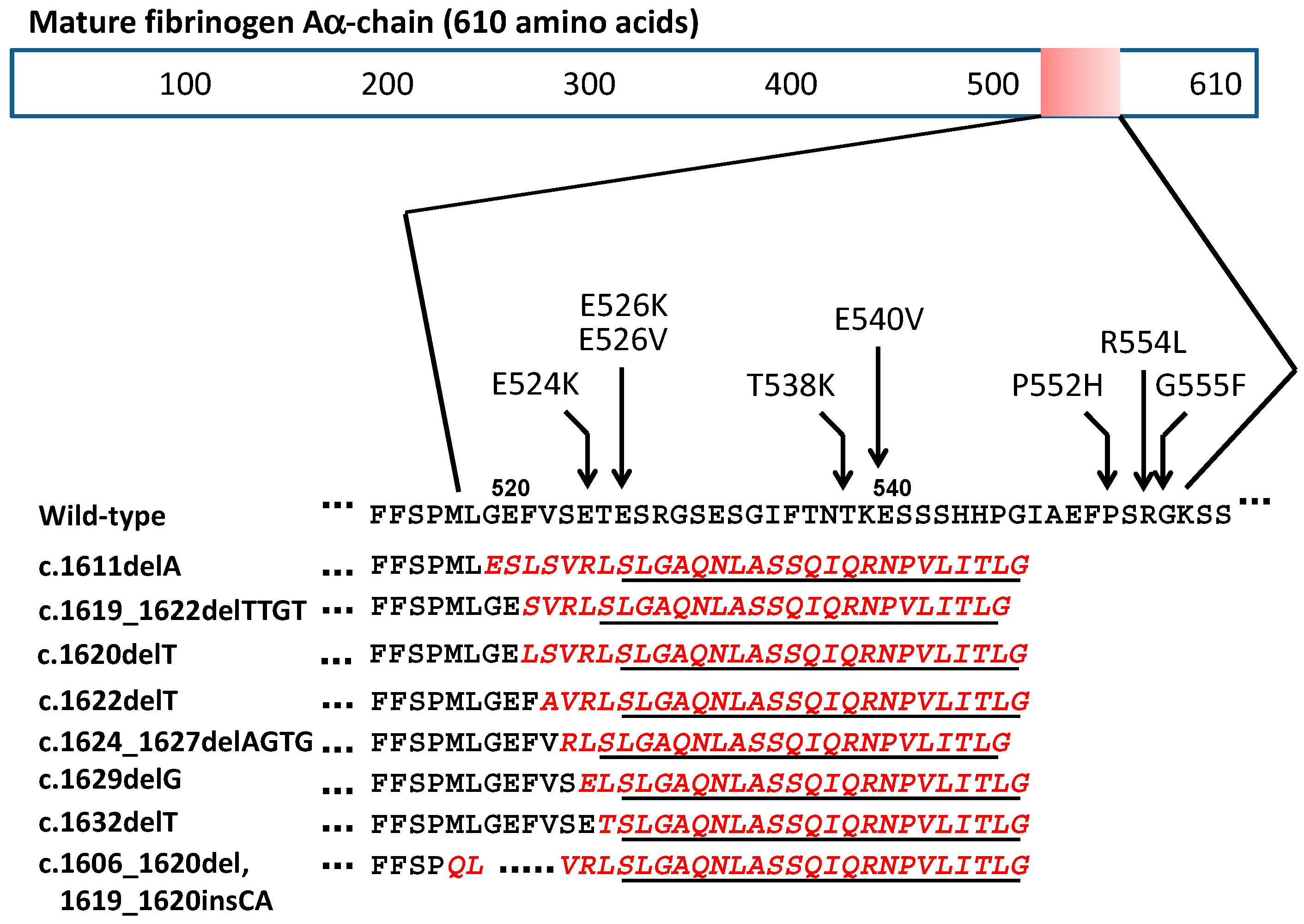 Table 2. Therapeutic options in major systemic amyloidoses.
Table 2. Therapeutic options in major systemic amyloidoses.
© 2018 by the authors. Licensee MDPI, Basel, Switzerland. This article is an open access article distributed under the terms and conditions of the Creative Commons Attribution (CC BY) license (http://creativecommons.org/licenses/by/4.0/).
We use cookies on our website to ensure you get the best experience. Read more about our cookies here.
Accept
We have just recently launched a new version of our website. Help us to further improve by taking part in this short 5 minute survey here. here.
Never show this again