Here, we describe a patient with bilateral breast cancer and melanoma, and with a concomitant double variant, namely p.Gln563Ter in BRCA1 and p.Lys3326Ter in BRCA2. The BRCA2 p.Lys3326Ter (K3326X) (rs11571833) mutation identified in our patient is a debated substitution of thymidine for adenine which is currently regarded as benign polymorphism in main gene databases. Recent studies, however, describe this variant as associated with breast and ovarian tumors. Based on the observation of the cancer’s earliest age of onset in this subject, our purpose was to reevaluate this variant according to recent papers indicating a role of powerful modifier of the genetic penetrance. Genetic testing was performed in all consenting patient’s relatives, and in the collection of the clinical data particular attention was paid to the age of onset of the neoplasia. Following our observation that the our patient with double heterozygosis had an early age of onset for cancer similar to a few rare cases of double mutation for BRCA1 and BRCA2, we also performed an extensive review of the literature relative to patients carrying a double heterozygosity for both genes. In line with previous studies relative to the rare double heterozygosity in both BRCA1/2 genes, we found the earlier onset of breast cancer in our patient with both BRCA1/2 mutations with respect to other relatives carrying the single BRCA1 mutation. The presence of the second K3326X variant in our case induces a phenotype characterized by early onset of the neoplasia in a manner similar to the other cases of double heterozygosity previously described. Therefore, we suggest that during the genetic counseling, it should be recommendable to evaluate the presence of the K3326X variant in association with other pathogenic mutations. View Full-Text
Keywords: BRCA1/BRCA2; mutational analysis; double heterozygosity; age of onset; K3326X BRCA1/BRCA2; mutational analysis; double heterozygosity; age of onset; K3326X
►▼ Show Figures 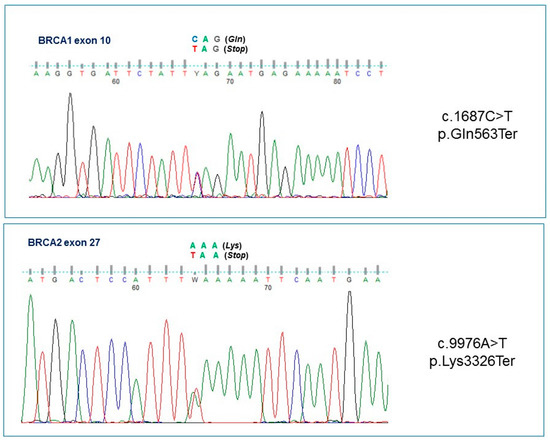