The hepatitis C virus (HCV) is an enveloped virus of the Hepacivirus genus in the Flaviviridae family [1,2]. It infects approximately 170 million individuals worldwide and is a leading cause of chronic liver diseases and related complications including liver fibrosis, decompensated cirrhosis, hepatocellular carcinoma, and death [1,3].
The HCV genome is a 9.6 kb single-stranded positive-sense RNA, encoding a long open reading frame consisting of 10 proteins. These proteins are processed by host and viral proteases into individual functional proteins. Core, E1, and E2 are structural proteins that make up the viral particle. P7, NS2, NS3, NS4A, NS4B, NS5A, and NS5B are non-structural proteins required for a complete HCV life cycle. Several non-structural proteins have enzymatic functions. For example, NS3/4A is a protease involved in the processing of NS3-NS5B polyprotein into individual proteins and hence a logical target of a number of approved direct-acting antivirals (DAAs) [4]. NS5B is an RNA-dependent RNA polymerase required for viral replication and hence another logical target of DAAs [1,2]. NS5A does not have apparent enzymatic activity; however, it interacts with various cellular and viral proteins and participates in many stages of the HCV life cycle [5]. Thus, targeting NS5A is anticipated with amplified anti-HCV effects [6]. In fact, the HARVONI® regimen (Gilead Sciences Inc., Foster City, CA, USA) that combines DAAs for NS5A (Ledipasvir) and NS5B (Sofosbuvir) produces a greater than 90% anti-HCV efficiency [7]. However, despite these highly efficient DAAs, eradication of HCV infection is still challenging for a number of reasons [3]. (1) The infection is often asymptomatic and hence is not identified and not treated. (2) Current treatment options are complex and are still evolving. (3) The accessibility to care and the affordability of the DAAs remain an obstacle.
NS5A consists of three domains (I, II, and III) linked by two low complexity sequence regions (LCS I and II) [5]. It is a phosphoprotein with hypo- and hyper-phosphorylated statuses. NS5A hyper-phosphorylation has been implicated in viral replication and assembly [2]. Others and we have identified several serine residues (i.e., S225, S229, S232, and S235) in the LCS I region that are responsible for NS5A hyper-phosphorylation [8,9,10,11]. Of these, S235 phosphorylation is a critical event that is indispensable for virus replication [10,11,12]. Inhibiting casein kinase I α (CKIα) responsible for NS5A S235 phosphorylation reduced S235 phosphorylation and HCV RNA levels [10]. Thus, targeting NS5A S235 phosphorylation is expected to have anti-HCV effects [12,13].
Plants are rich sources for a large number of bioactive phytochemicals with anti-HCV effects [14,15]. Here we screened six herbal decoctions for their ability to reduce HCV infection. These herbs were selected because they are produced by a number of biotech companies in Taiwan. This will ease scale-up production when desirable effects are discovered. Briefly, we describe functions/uses of each herbal decoction below. Aeginetia indica is used as a historical folk remedy for chronic liver diseases [16]. It also reduces renal cancer cell growth and metastasis [17]. Angelica sinensis contains antioxidant activities [18]. It was found to have inhibitory effects on hepatoma cells [19] and it also protects strenuous exercise-induced anemia in rats [20]. Lycium barbarum was found to inhibit liver inflammation and fibrosis in rats [21] and it attenuates high-fat diet-induced hepatic steatosis [22]. Paeonia suffruticosa was shown to protect hepatic cells by up-regulating heme oxygenase-1 [23]. Radix curcumae is often used to treat jaundice and cholelithiasis [24]. Dried roots of indigo plants including Isatis tinctoria are frequently used as an anti-inflammatory and an anti-viral agent for hepatitis, influenza, and various types of inflammation [25]. Among these six herbal decoctions tested, we found that the Aeginetia indica decoction exerted multiple inhibitory effects on the HCV life cycle in general and viral replication in particular.

Human hepatocarcinoma 7.5.1 cell line (Huh7.5.1) was maintained in Dulbecco’s modified minimal essential medium (DMEM) supplemented with 10% fetal bovine serum without any antibiotics in a 5% CO2 incubator at 37 °C. The HCV Renilla luciferase reporter (J6/JFH1) construct (5′C19Rluc2aUbi) was from Charles Rice at the Rockefeller University (New York, NY, USA) [38]. It is a monocistronic reporter virus DNA construct composed of DNA of the J6 and JFH1 isolates. It has the JFH1 5′ UTR followed by amino acids 1–19 of the J6 core protein (Core p19), Renilla luciferase, foot and mouth disease virus autoproteolytic 2A peptide, a ubiquitin monomer (Ubi), and the entire HCV polyprotein coding sequence starting with the first amino acid (Met) of the core protein (Figure 6). The HCV polyprotein coding sequence has an intragenotypic break point between the non-structure proteins NS2 of the J6 isolate and NS3 of the JFH1 isolate. The construct also carries β-lactamase gene for ampicillin resistance (AmpR). The IRESHCV-LUC construct was from Penelope Mavromara at the Hellenic Pasteur Institute, Greece [39].

The HCV construct was linearized via Xbal (catalog No. R105, New England Biolabs, Ipswich, MA, USA) digestion and used to transcribe the viral RNA using the Ambion MAXIscript T7 in vitro transcription kit (catalog No. AM1312, Ambion, Waltham, MA, USA). The viral RNA was purified by phenol-chloroform extraction and isopropanol precipitation. Quality and quantity of the RNA was assessed by a NanoDrop spectrophotometer (Thermo Fisher Scientific Inc., Waltham, MA, USA).

Huh7.5.1 cells were seeded at a density of 2 × 106 cells in a 10-cm petri dish one day before being transfected with 10 µg HCV RNA with the DMRIE-C Reagent (catalog No. 10495-014, Thermo Fisher Scientific Inc., Waltham, MA, USA). Forty-eight hours after the transfection, the cells were freed from the petri dish with trypsin digestion and reseeded into a 6-well plate (4 × 105 cell/well) or a 48-well plate (4 × 104 cell/well). The cells were then exposed to vehicle or herbal decoctions for 3 days before they were lysed and subjected to the luciferase activity assay using a luciferase assay kit (catalog No. E1500, Promega, Madison, WI, USA). For dose dependence and time course studies, the cells were treated with vehicle or herbal decoctions at various concentrations and time before the cells were lysed for the luciferase assay.

In vitro-transcribed HCV RNA was transfected into the Huh7.5.1 cells for 3 days before the virion-containing culture medium was collected daily for a week. The medium was pooled and centrifuged at 3000× g for 30 min to remove cell debris before the virion in the supernatant was concentrated with a 100 kDa Amicon Ultra-15 centrifugal filter (UFC910008, Merck Ltd., Taipei, Taiwan). Viral titer was determined with the method of serial dilution (10×) that resulted in infection (i.e., NS5A positive) and detected with immunofluorescence staining using the 2F6 antibody (BioFront Technologies, Tallahassee, FL, USA). For virus infection, Huh7.5.1 cells were infected with the virion with a multiplicity of infection at 0.001. Specific conditions are illustrated in the figures.

Among six commonly used herbal decoctions thought to benefit the liver, we found that the Aeginetia indica decoction contains factors that exert multiple inhibitory effects on the hepatitis C virus life cycle. The most profound effect of the Aeginetia indica decoction was inhibition of hepatitis C virus replication likely via reducing phosphorylation of the non-structural protein 5A at serine 235.

This work was supported by the National Health Research Institutes, Taiwan (NHRI-EX107-10620BI to Ming-Jiun Yu). 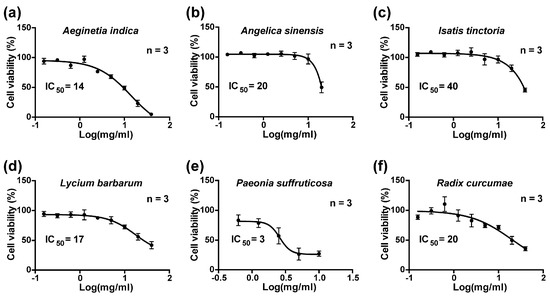 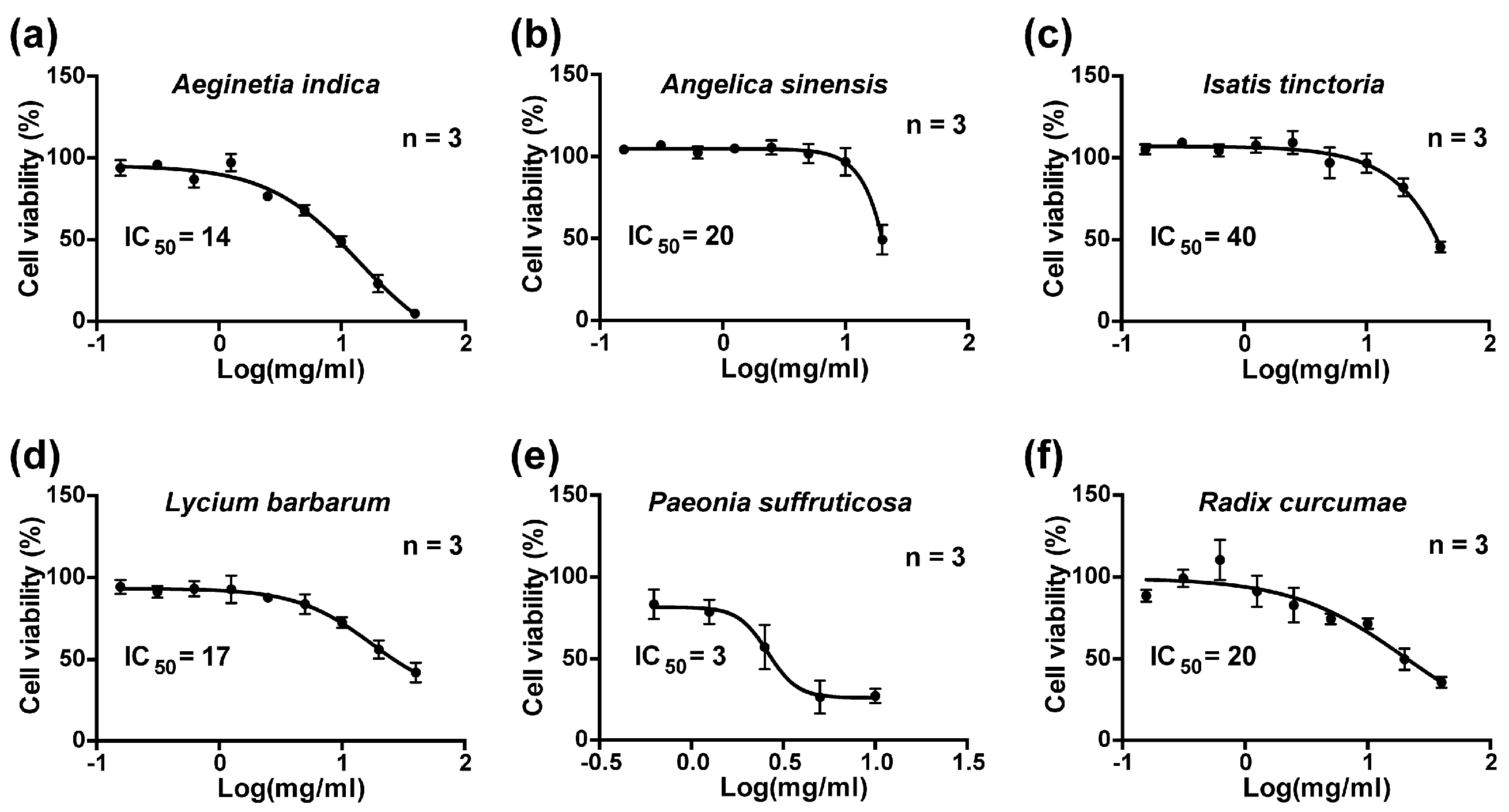 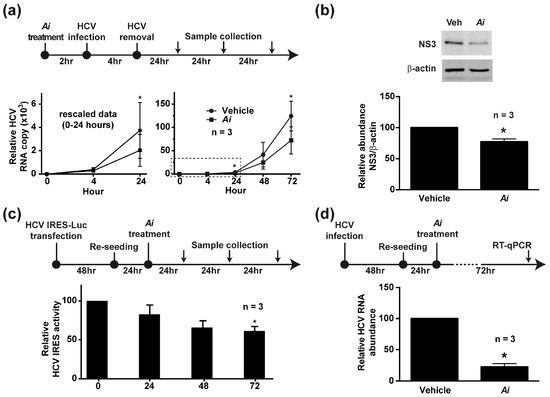