The challenge in tetraploid cotton cultivars is the narrow genetic base and therefore, the bottleneck is how to obtain interspecific hybrids and introduce the germplasm directly from wild cotton to elite cultivars. Construction of genetic maps has provided insight into understanding the genome structure, interrelationships between organisms in relation to evolution, and discovery of genes that carry important agronomic traits in plants. In this study, we generated an interspecific hybrid between two wild diploid cottons, Gossypium davidsonii and Gossypium klotzschianum, and genotyped 188 F2:3 populations in order to develop a genetic map. We screened 12,560 SWU Simple Sequence Repeat (SSR) primers and obtained 1000 polymorphic markers which accounted for only 8%. A total of 928 polymorphic primers were successfully scored and only 728 were effectively linked across the 13 chromosomes, but with an asymmetrical distribution. The map length was 1480.23 cM, with an average length of 2.182 cM between adjacent markers. A high percentage of the markers on the map developed, and for the physical map of G. raimondii, exhibited highly significant collinearity, with two types of duplication. High level of segregation distortion was observed. A total of 27 key genes were identified with diverse roles in plant hormone signaling, development, and defense reactions. The achievement of developing the F2:3 population and its genetic map constructions may be a landmark in establishing a new tool for the genetic improvement of cultivars from wild plants in cotton. Our map had an increased recombination length compared to other maps developed from other D genome cotton species. View Full-Text
Keywords: wild cotton spp; genetic map; polymorphic primers; null alleles wild cotton spp; genetic map; polymorphic primers; null alleles
►▼ Show Figures 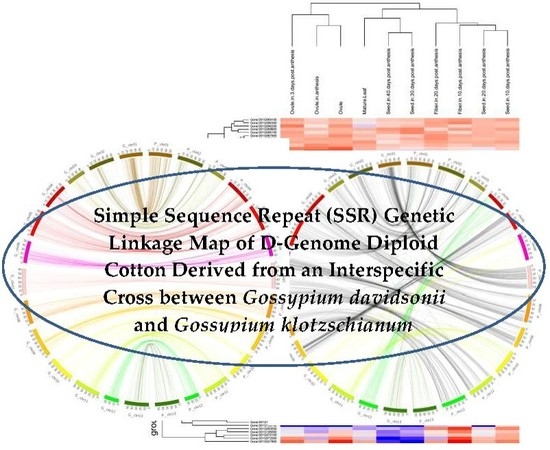