Parabens are effective preservatives widely used in cosmetic products and processed food, with high human exposure. Recent evidence suggests that parabens exert estrogenic effects. This work investigated the potential interference of parabens with the estrogen-activating enzyme 17β-hydroxysteroid dehydrogenase (17β-HSD) 1 and the estrogen-inactivating 17β-HSD2. A ligand-based 17β-HSD2 pharmacophore model was applied to screen a cosmetic chemicals database, followed by in vitro testing of selected paraben compounds for inhibition of 17β-HSD1 and 17β-HSD2 activities. All tested parabens and paraben-like compounds, except their common metabolite p-hydroxybenzoic acid, inhibited 17β-HSD2. Ethylparaben and ethyl vanillate inhibited 17β-HSD2 with IC50 values of 4.6 ± 0.8 and 1.3 ± 0.3 µM, respectively. Additionally, parabens size-dependently inhibited 17β-HSD1, whereby hexyl- and heptylparaben were most active with IC50 values of 2.6 ± 0.6 and 1.8 ± 0.3 µM. Low micromolar concentrations of hexyl- and heptylparaben decreased 17β-HSD1 activity, and ethylparaben and ethyl vanillate decreased 17β-HSD2 activity. However, regarding the very rapid metabolism of these compounds to the inactive p-hydroxybenzoic acid by esterases, it needs to be determined under which conditions low micromolar concentrations of these parabens or their mixtures can occur in target cells to effectively disturb estrogen effects in vivo.
Keywords: 17β-hydroxysteroid dehydrogenase; estrogen; xenobiotic; endocrine disrupting chemical; in silico; in vitro 17β-hydroxysteroid dehydrogenase; estrogen; xenobiotic; endocrine disrupting chemical; in silico; in vitro

Paraben compounds are widely used as additives in cosmetic products and processed food due to their broad spectrum preservative efficiency, low cost, and low toxicity [1,2]. Additionally, parabens possess excellent chemical stability and are biodegradable. Chemically, parabens are alkyl esters of p-hydroxybenzoic acid of which propyl- and methylparaben are the most frequently used parabens in cosmetic products. The preservative effects of parabens are at least in part due to disturbances of membrane transport and mitochondrial function in microorganisms [3,4]. European Union (EU) authorities permit a paraben content in cosmetic products of 0.4% for one ester compound and 0.8% for mixtures of esters (EU Council Directive, Cosmetic Products, 76/768/EEC/M11). Generally, mixtures of parabens are used to increase preservative efficiency. Lately, the acceptance of the use of parabens has decreased among chemical and pharmaceutical companies and, despite their favorable properties, there is a tendency to replace parabens with other compounds because of potential disturbances of endocrine effects [5].
Parabens can enter the systemic circulation via oral intake or by transdermal penetration, which was confirmed by the detection of systemic paraben concentrations upon exposure to these compounds [6,7,8]. However, parabens are very rapidly metabolized to p-hydroxybenzoic acid by esterases in the liver and in the skin, followed by excretion via the urine [9]. Parabens are mainly excreted as glycine, sulfate, and glucuronide conjugates [10]. The topical application of paraben containing products more likely contributes to the systemic paraben concentration than their oral intake due to the rapid intestinal and hepatic metabolism [11]. This assumption is supported by the fact that the main human paraben exposure is due to the extensive use of personal care products [12].
Parabens have been associated with disturbances of estrogen hormone action and potential estrogenic activities of parabens have been extensively investigated in the past decades [6,9]. In 2004, Darbre et al. reported the detection of unconjugated parabens in breast cancer tissue, triggering further investigations into estrogenic activities of parabens [13]. Estrogens are primary female sex hormones playing a central role in a variety of physiological actions in females and males. In females, estrogens primarily regulate sexual development of the reproductive tissues and development of secondary sexual characteristics at puberty [14]. Estrogens trigger target gene expression mainly by acting through estrogen receptors α and β (ERα, ERβ) [15]. The 17β-hydroxysteroid dehydrogenase types 1 and 2 (17β-HSD1 and 17β-HSD2) regulate the local balance between potent and weakly active estrogens. While 17β-HSD1 converts the weakly active estrone (E1) into the most potent estrogen estradiol (E2), 17β-HSD2 catalyzes the opposite reaction and decreases the local concentrations of active estrogens [16] (Figure 1). Thus, compounds inhibiting 17β-HSD2 result in increased local active estrogen concentrations and can increase the transcription of estrogenic target genes, thereby causing estrogenic effects. Conversely, compounds inhibiting 17β-HSD1 possess anti-estrogenic properties by reducing local active estrogen concentrations. A high 17β-HSD2 to 17β-HSD1 ratio in ERα-positive breast cancer patients has been shown to positively correlate with the survival of ERα-positive patients [17]. This finding illustrates the importance of proper 17β-HSD2 function.
Most of the studies addressing interferences of parabens with estrogen hormone action focused on the estrogen receptors. Possible interferences of parabens with pre-receptor control enzymes modulating endocrine functions, such as hydroxysteroid dehydrogenases (HSDs), remain to be investigated. Following indications from a virtual screening of a cosmetic products database, the present study addresses potential endocrine disrupting effects of parabens on estrogen homeostasis through inhibition of human estrogen-metabolizing enzymes in vitro.

Prior to the in vitro testing, the virtual screening of a cosmetic chemical database using 17β-HSD2 ligand-based pharmacophore models (Figure 2A,B) [18], which are based on experimentally-verified inhibitors, revealed parabens as possible 17β-HSD2 inhibitors. The chemical database contained over 9000 compounds that are approved as bioactive molecules, carrier materials, and preservative additives in cosmetic products. Models 1 and 2 returned 23 and 37 hits, respectively, while model 3 found only one compound. After merging the hit lists and removing duplicates, 49 unique hits remained. Among these hits, seven belonged to the chemical class of parabens (ethylparaben, phenylparaben, propylparaben, butylparaben, isopropylparaben, isobutylparaben, and 2-phenoxyethyl p-hydroxybenzoate, Figure 2C).
Therefore, this class of compounds was subjected to biological testing. In total, ten commercially-available parabens, its main metabolite p-hydroxybenzoic acid, and four paraben-like compounds, such as the virtual hit ethyl vanillate, were analyzed in vitro (Figure 3).
All tested parabens, as well as methyl vanillate, ethyl vanillate, ethyl gallate, and butyl gallate inhibited 17β-HSD2 at a concentration of 20 µM (Figure 4A). The common paraben metabolite p-hydroxybenzoic acid was inactive. For the two most potent compounds, IC50 values were determined. Ethylparaben and ethyl vanillate inhibited 17β-HSD2 with an IC50 of 4.6 ± 0.8 µM and 1.3 ± 0.5 µM [19], respectively (Figure 4B). A mixture of ethyl- (6 µM) and hexylparaben (12 µM) showed additive effects in terms of 17β-HSD2 inhibition compared to each individual compound (Figure 5).
Additionally, effects of parabens and paraben-like compounds on the activity of 17β-HSD1 were analyzed. Small parabens such as the main metabolite p-hydroxybenzoic acid, methyl-, and ethylparaben did not inhibit 17β-HSD1. In contrast larger parabens size-dependently inhibited 17β-HSD1 activity (Figure 6A). Methyl vanillate, ethyl vanillate, ethyl gallate and butyl gallate did not inhibit 17β-HSD1. IC50 values were determined for the two most potent parabens inhibiting 17β-HSD1 (Figure 6B). Hexyl- and heptylparaben showed IC50 values of 2.6 ± 0.6 µM and 1.8 ± 0.3 µM, respectively, in 17β-HSD1 lysate assays. Intact human granulosa COV434 cells, endogenously expressing 17β-HSD1, were used to determine IC50 values of hexylparaben (3.5 ± 1.3 µM) and heptylparaben (4.9 ± 1.0 µM), indicating that parabens are able to penetrate cell membranes and inhibit the enzyme (Figure 6C).
The size-dependent structure-activity-relationship of the tested parabens regarding 17β-HSD1 inhibition was additionally investigated using molecular docking experiments based on an existing crystal structure. The compounds positions in the active site were predicted in an orientation typical for 17β-HSD1 inhibitors. The ester was coordinated by a bifurcated hydrogen bond with the catalytically active amino acids Ser142 and Tyr155. On both other sides of this central anchor, the ligand was contacting hydrophobic parts of the binding site. In vitro, the activity of the parabens increased with the size of the hydrophobic chain. Indeed, extended hydrophobic contacts were observed for the more active compounds. Additionally, the orientation of the binding site was variable. While the long chain parabens preferably occupied the hydrophobic binding site containing Phe259, most smaller compounds were positioned with the side chain into the direction of the cofactor NADPH (Figure 7 and Figure A1).
For comparison, we also calculated cLogP values and compared them to the in vitro inhibition of 17β-HSD1 (Table 1).

The CAS number of compounds approved as cosmetics ingredients in the European Union was collected from the European Commission homepage [32]. The structures of the compounds were retrieved from the Pubchem database [33] using PipelinePilot (Pipeline Pilot 9.1, Biovia Inc., San Diego, CA, USA, 2014). In case multiple structures were obtained for a CAS number, only the entry with the highest number of defined stereo-centers was kept. Salts and counter ions were removed using the wash molecules protocol in MOE, version 2011.10 (Molecular Operating Environment (MOE) 2011.10, Chemical Computing Group ULC, Montreal, QC, Canada). Discovery Studio, version 4.0 (Discovery Studio 4.0; Biovia Inc., San Diego, CA, USA, 2014) was employed to generate tautomers and isomers (in case stereo-centers were undefined) using the default settings. The 3D database was prepared for virtual screening by calculating conformational models for each molecule using LigandScout (LigandScout 3.03b, InteLigand GmbH, Vienna, Austia, 2014) and the build-in Omega [34] FAST option (max. 25 conformers per molecule). The final database consisted of 9045 unique entries represented by 16,939 structures including tautomeric and isomeric forms. Conformational analysis was successful for 16,553 compounds, which was the final number of entries in the virtual screening database.

The cosmetic products database was screened using LigandScout 3.03b with default settings. Standard physicochemical properties such as the cLogP value were calculated within this program, as well.

Molecular docking studies were performed using GOLD (Gold version 5.2, CCDC, Cambridge, UK) [35]. The protein data bank entry 3hb5 [36] was prepared using the protein preparation wizard. The water molecule 377 was set to “toggle and spin”, which means that it can be replaced by the ligand. ChemScore was used as scoring function. Docking validation was carried out by re-docking of the steroidal X-ray crystal structure ligand. To avoid conformational bias, the 2D structure of the ligand was generated using ChemDraw (ChemBioDraw version 14, PerkinElmer, Waltham, MA, USA, 2016), converted into a structure-data file (sd file) with Pipeline Pilot, and built up as a 3D starting structure using OMEGA. The root-mean-square error (RMSD) of the binding pose of the X-ray structure compared to the best-ranked docking structure was 0.920 Å.

The present study identified several parabens inhibiting 17β-HSD1 and 17β-HSD2. Parabens can exert estrogenic effects by inhibiting 17β-HSD2. Inhibition of 17β-HSD2 prevents local inactivation of the active estrogen E2. All tested parabens and paraben-like structures, except the main metabolite p-hydroxybenzoic acid, interfered with the activity of 17β-HSD2 at a concentration of 20 µM. The most potent compounds had IC50 values in the low micromolar range and these parabens showed additive inhibitory effects. The potential estrogenic effects reported in this study were observed at lower concentrations than those activating the ER or inhibiting SULTs as previously reported [8,22,23,24,25,26]. Whereas most of the tested parabens were found to interfere with 17β-HSD2 activity, thereby increasing local E2 concentrations, only larger parabens were found to inhibit 17β-HSD1. The most frequently used parabens in cosmetic products are short parabens; therefore, inhibition of 17β-HSD1 by parabens used in cosmetic products is of minor relevance regarding health issues. Nevertheless, this study revealed a size-dependent 17β-HSD1 inhibition by parabens, which could be explained by extensive hydrophobic contacts in the enzyme’s binding site.

This study was supported by the Swiss Center for Applied Human Toxicology (2017/01/01–2018/12/31) and the Swiss Federal Office of Public Health (FOPH) (2016/03/01–2016/12/31) (to Alex Odermatt) and the Austrian Science Fund (P26782, to Daniela Schuster). Daniela Schuster is an Ingeborg Hochmair Professor of the University of Innsbruck. We thank Thierry Langer, University of Vienna, and InteLigand GmbH for providing an academic license for LigandScout.

The authors declare no conflict of interest. The founding sponsors had no role in the design of the study; in the collection, analyses, or interpretation of data in the writing of the manuscript; and in the decision to publish the results. 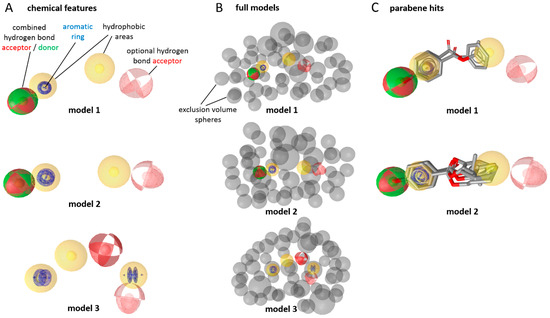 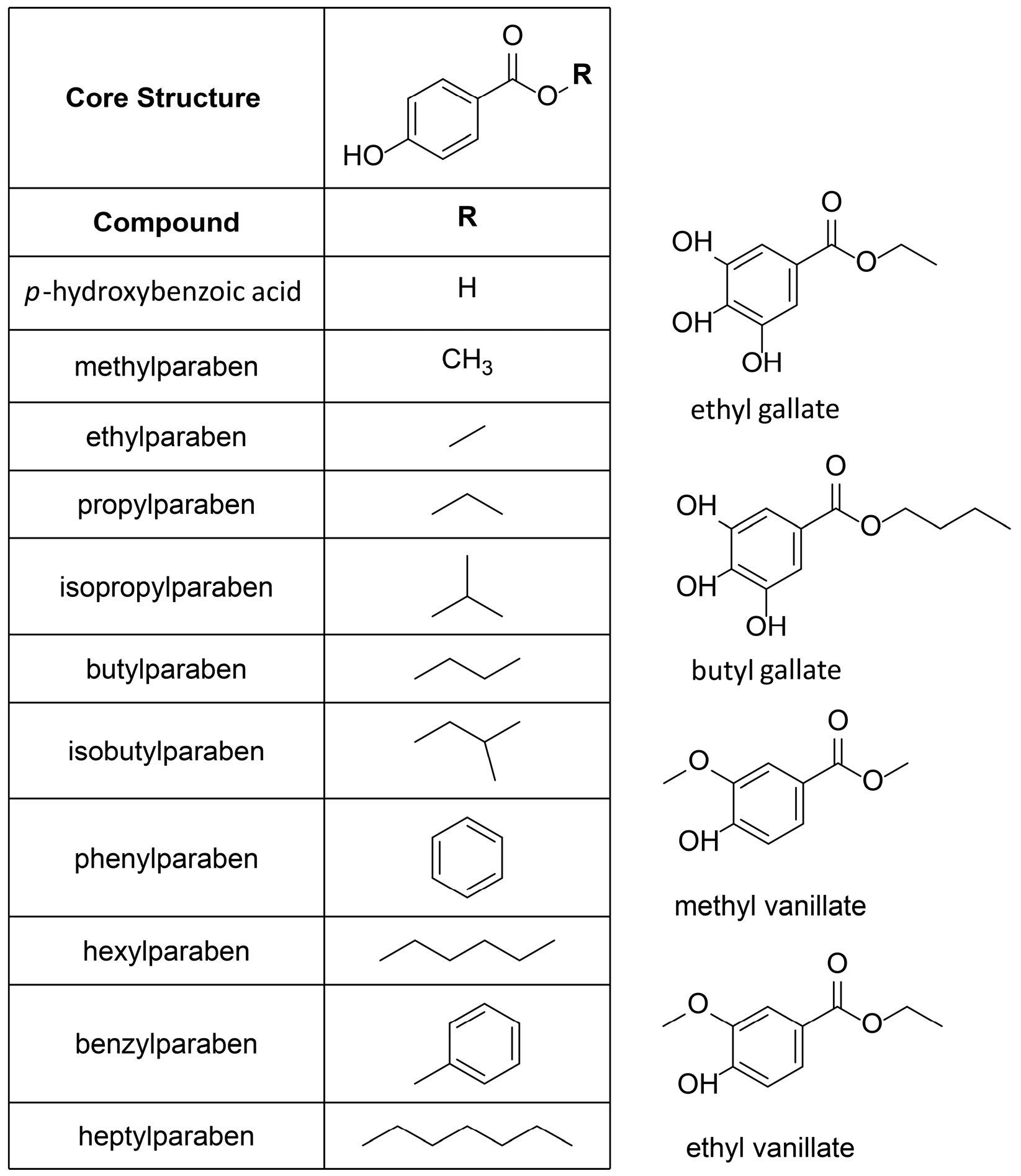 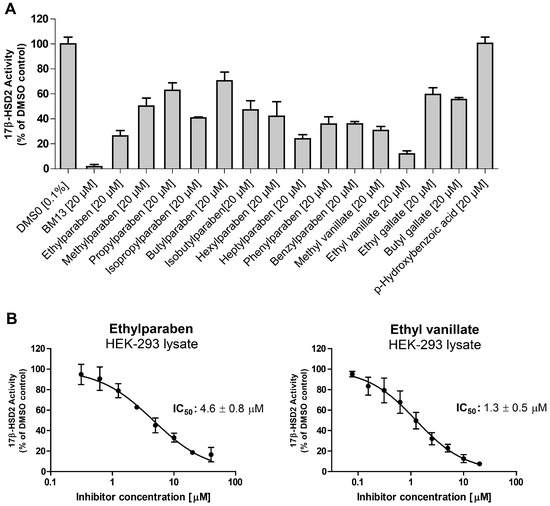 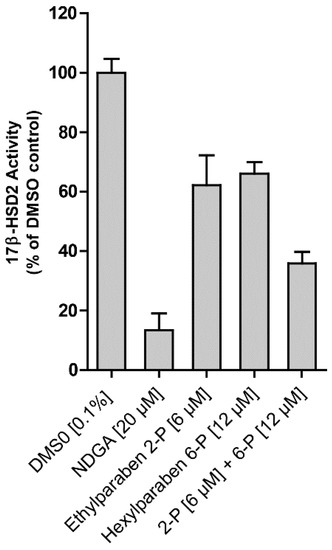 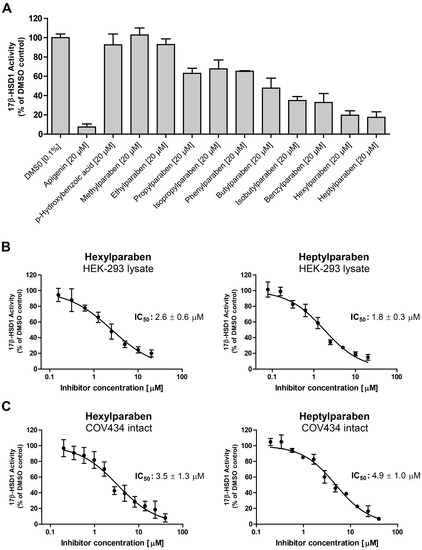 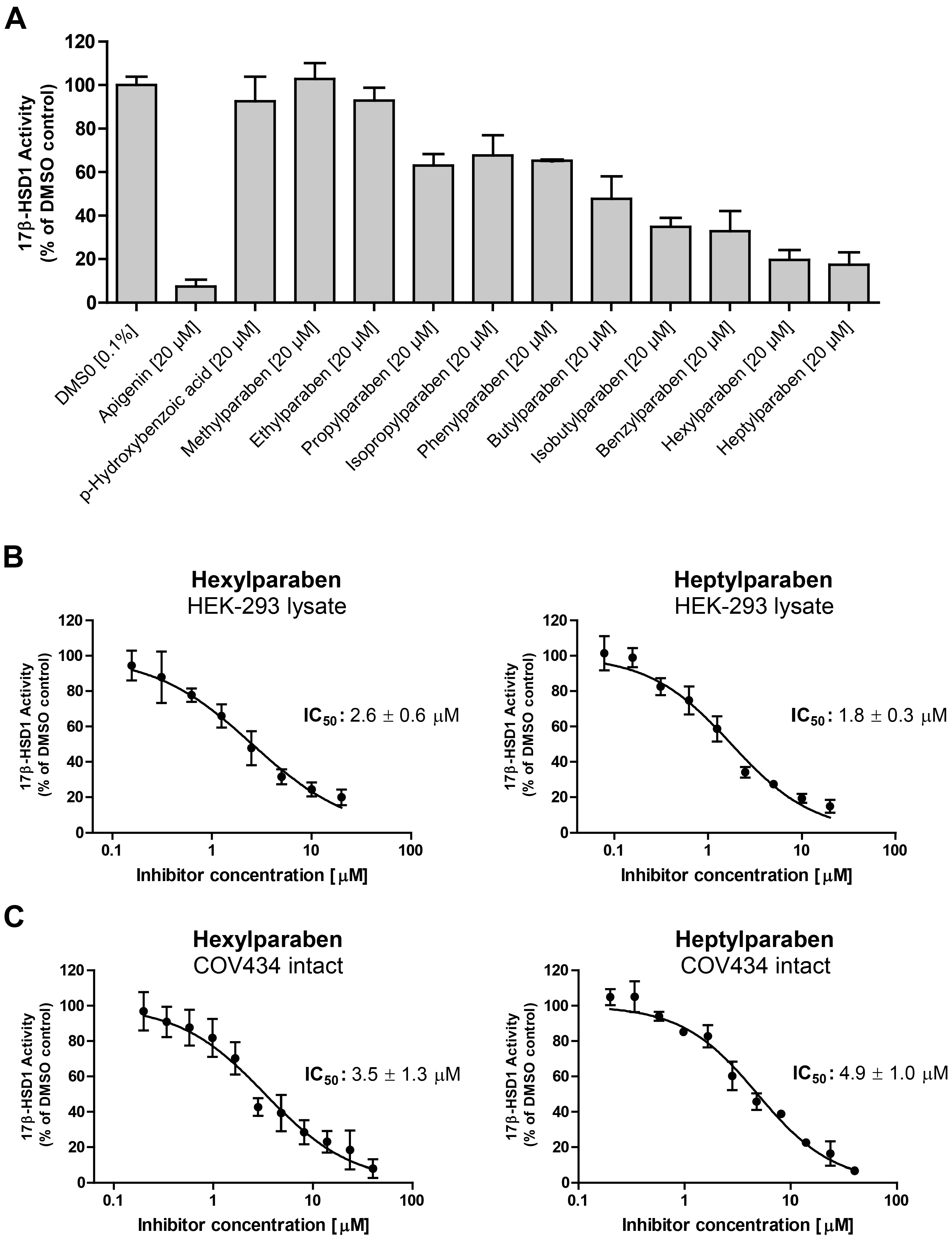 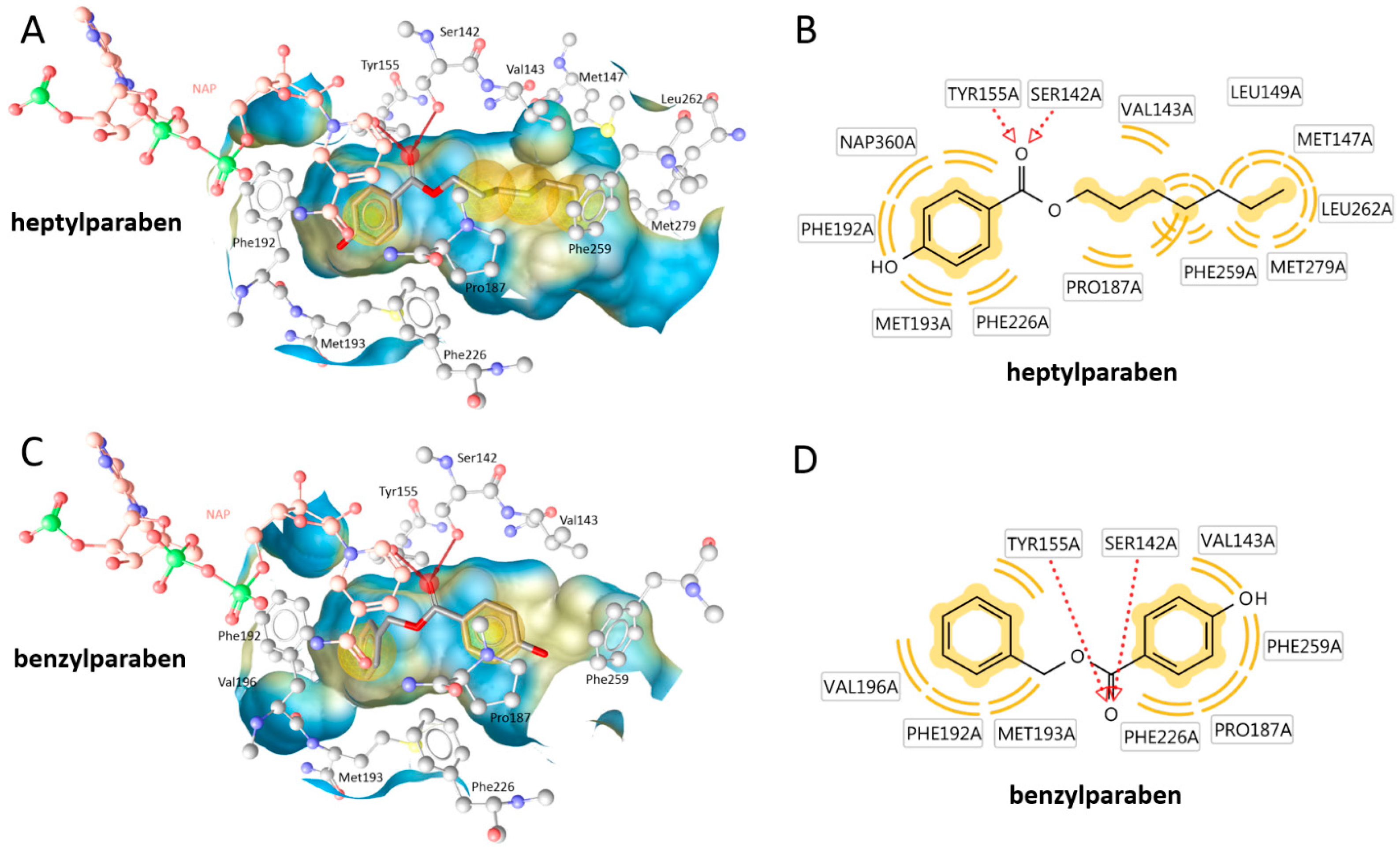