All tumors have in common to reactivate a telomere maintenance mechanism to allow for unlimited proliferation. On the other hand, genetic instability found in some tumors can result from the loss of telomeres. Here, we measured telomere length in colorectal cancers (CRCs) using TRF (Telomere Restriction Fragment) analysis. Telomeric DNA content was also quantified as the ratio of total telomeric (TTAGGG) sequences over that of the invariable Alu sequences. In most of the 125 CRCs analyzed, there was a significant diminution in telomere length compared with that in control healthy tissue. Only 34 tumors exhibited no telomere erosion and, in some cases, a slight telomere lengthening. Telomere length did not correlate with age, gender, tumor stage, tumor localization or stage of tumor differentiation. In addition, while telomere length did not correlate with the presence of a mutation in BRAF (V-raf murine sarcoma viral oncogene homolog B), PIK3CA (phosphatidylinositol 3-kinase catalytic subunit), or MSI status, it was significantly associated with the occurrence of a mutation in KRAS. Interestingly, we found that the shorter the telomeres in healthy tissue of a patient, the larger an increase in telomere length in the tumor. Our study points to the existence of two types of CRCs based on telomere length and reveals that telomere length in healthy tissue might influence telomere maintenance mechanisms in the tumor. View Full-Text
Keywords: colorectal cancer; telomere length; KRAS mutations; telomere restriction fragment analysis colorectal cancer; telomere length; KRAS mutations; telomere restriction fragment analysis
►▼ Show Figures 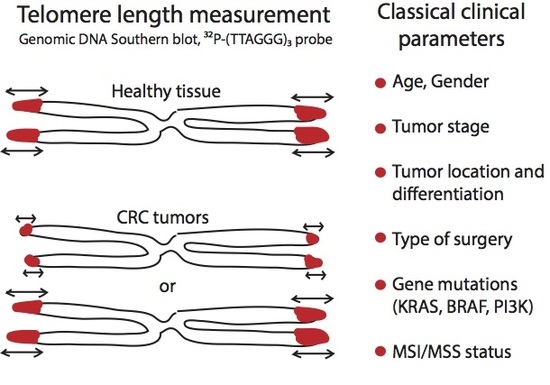