Pigmented Epithelioid Melanocytoma (PEM)/Animal Type Melanoma (ATM): Quest for an Origin. Report of One Unusual Case Indicating Follicular Origin and Another Arising in an Intradermal Nevus
Next Article in Special Issue

:
The cystic fibrosis transmembrane conductance regulator (CFTR) Cl− channel belongs to the ATP-binding cassette (ABC) transporter superfamily and regulates Cl− secretion in epithelial cells for water secretion. Loss-of-function mutations to the CFTR gene cause dehydrated mucus on the apical side of epithelial cells and increase the susceptibility of bacterial infection, especially in the airway and pulmonary tissues. Therefore, research on the molecular properties of CFTR, such as its gating mechanism and subcellular trafficking, have been intensively pursued. Dysregulated CFTR trafficking is one of the major pathological hallmarks in cystic fibrosis (CF) patients bearing missense mutations in the CFTR gene. Hormones that activate cAMP signaling, such as catecholamine, have been found to regulate the intracellular trafficking of CFTR. Insulin is one of the hormones that regulate cAMP production and promote trafficking of transmembrane proteins to the plasma membrane. The functional interactions between insulin and CFTR have not yet been clearly defined. In this review article, I review the roles of CFTR in epithelial cells, its regulatory role in insulin secretion, and a mechanism of CFTR regulation by insulin.
Keywords:
CFTR; insulin; epithelial Cl− transport

Cystic fibrosis (CF) is the most frequent autosomal recessive lethal disorders in the Caucasian population, and results from loss-of-function mutations in the cystic fibrosis transmembrane conductance regulator (CFTR) gene [1,2,3]. This gene is located on the long arm of chromosome 7 in humans and encodes a polytopic integral membrane protein that functions as a cAMP- and phosphorylation-regulated Cl− channel at the apical surface of secretory epithelia [4,5]. The CFTR Cl− channel is categorized as ABCC7, a member of the ATP-binding cassette (ABC) transporter superfamily [2,3]. The molecular structure and channel gating regulation of the CFTR Cl− channel has been extensively studied. The CFTR Cl− channel is composed of five domains: (1) two membrane-spanning domains (MSD1 and MSD2) form the pore of the channel with a permeability to Cl− and HCO3−, secreting these ions across the membrane, and each domain is composed of six transmembrane segments (TM1–TM6 and TM7–TM12); (2) two cytosolic nucleotide-binding domains (NBD1 and NBD2), at which ATP is hydrolyzed, regulate channel gating; and (3) a regulatory domain (RD) containing multiple phosphorylation sites controls channel activity [3]. Further, the molecular mechanism causing CFTR Cl− channel dysfunction has been also investigated in depth, and the dysfunction is classified into five types (Classes I−V) (Figure 1) [6]. Dysfunctions of CFTR Cl− channels, categorized as shown in Figure 1 [6], cause infection of bacteria and viruses due to little or lack of water secretion driven by Cl− secretion through the CFTR Cl− channel in epithelial tissues [7] as well as other disorders in non-epithelial tissues, such as pancreatic insulin-secreting β cells [6,8]. In this review article, I review roles of the CFTR Cl− channel in the regulation of epithelial water secretion, regulatory mechanisms of insulin secretion, and the insulin action on the CFTR Cl− channel.

Transepithelial Cl− secretion from the interstitial space to the apical one is mediated via two steps: (1) the first step is Cl− uptake into the intracellular space via Cl− transporters such as Na+-K+-2Cl− cotransporter (NKCC) located at the basolateral membrane, and (2) the second step is Cl− release from the intracellular space via CFTR Cl− channels expressed at the apical membrane [9,10,11,12,13,14]. Transepithelial Cl− secretion carries negative charges followed by the movement of cations, such as Na+ and K+ [15,16,17,18,19,20,21,22,23,24]. The secretion of NaCl and KCl generates osmotic gradients, which produce water secretion [15,16,17,18,19,20,21,22,23,24]. To elevate transepithelial Cl− secretion, at least one of these transporters and channels has to be stimulated [25,26,27,28,29]. On the one hand, functional deficiency of these transporters and/or channels leads to disorder in transepithelial Cl− secretion, which dehydrates the apical space of epithelial tissues resulting in an increase in bacterial and viral infectivity [25,26,27,28,29]. This means that the discovery of factors regulating transepithelial Cl− secretion [9,10,11] is essential to control the amount of apical surface-covering fluid and prevent infection of bacteria and viruses.
Many studies indicate the physiological and pathophysiological roles of NKCC and CFTR Cl− channels in water secretion [30], cell differentiation [31,32,33,34], cell growth [35,36,37,38,39], gene expression, and cell signaling [40,41,42,43,44,45]. More than 2000 mutations with functional deficiencies have been found in the CFTR gene, including the deficiency of intracellular trafficking of the CFTR Cl− channel, leading to a variety of clinical symptoms in CF patients [46,47]. The ΔF508 mutation of CFTR is a deletion of phenylalanine 508 in NBD1, and is the most common cause of CF [46]. The ΔF508 mutation occurs in approximately 85% of CF patients, and presents a deficiency of intracellular translocation to the apical (plasma) membrane due to CFTR misfolding and endoplasmic reticulum (ER) retention [5].

3. Action of Insulin in the Kidney and Lung under Conditions with Insulin Resistance

4. Roles of the CFTR Cl− Channel in Insulin Secretion

5. Roles of the CFTR Cl− Channel in Insulin Action on Glucose Uptake and the Transepithelial Resistance in Epithelial Tissues

6. Insulin Action on the CFTR Cl− Channel in Epithelial Tissues and Its Molecular Mechanism

CFTR Cl− channels, one of the ABC transporter superfamily, play essential roles in: (1) water secretion in epithelial tissues, by generating Cl− secretion and prevention against infection of bacteria and viruses, and (2) maintenance of the plasma membrane depolarization by functioning as a Cl− efflux pathway, which causes glucose-induced insulin secretion by increasing the [Ca2+]c in pancreatic β cells. Insulin may play a role in barrier immunity via the elevation of Cl− secretion due to the stimulation of CFTR Cl− channel expression by inactivating MEK (a negative factor for the expression of CFTR Cl− channels). Insulin also plays an important role in the prevention against infection of bacteria and viruses by both decreasing glucose contents at the apical space of airway epithelial cells and elevating the resistance of the tight junction (barrier function) of airway epithelial cells. Therefore, a deficiency of CFTR Cl− channels causes: (1) infection of bacteria and viruses due to dehydration and high glucose contents at the airway apical surface, associated with a relatively high permeability of the paracellular pathway, and (2) a decrease in insulin secretion due to the diminution of glucose-induced membrane depolarization caused by a lack of Cl− efflux through CFTR Cl− channels at the plasma membrane of pancreatic β cells. 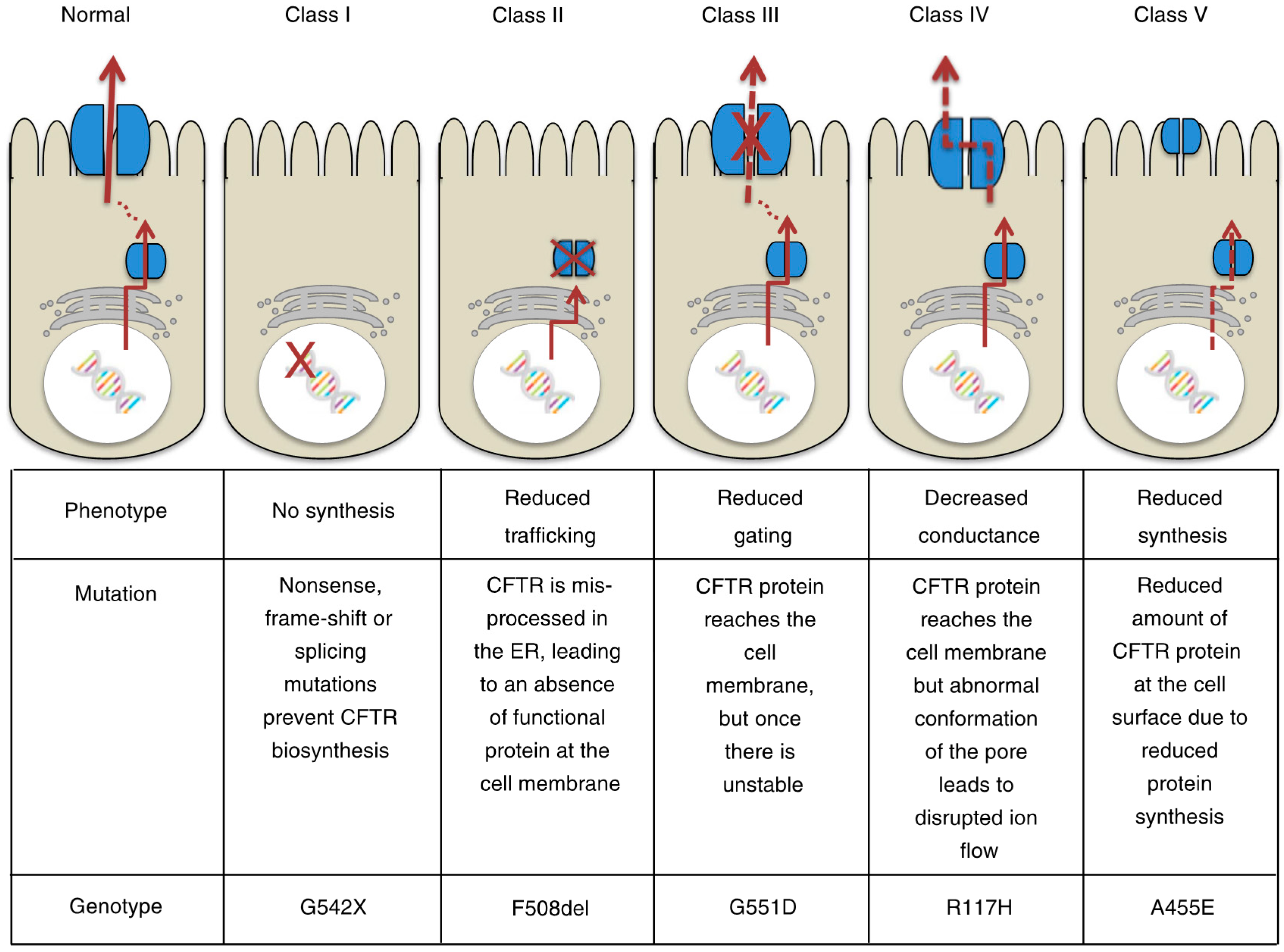 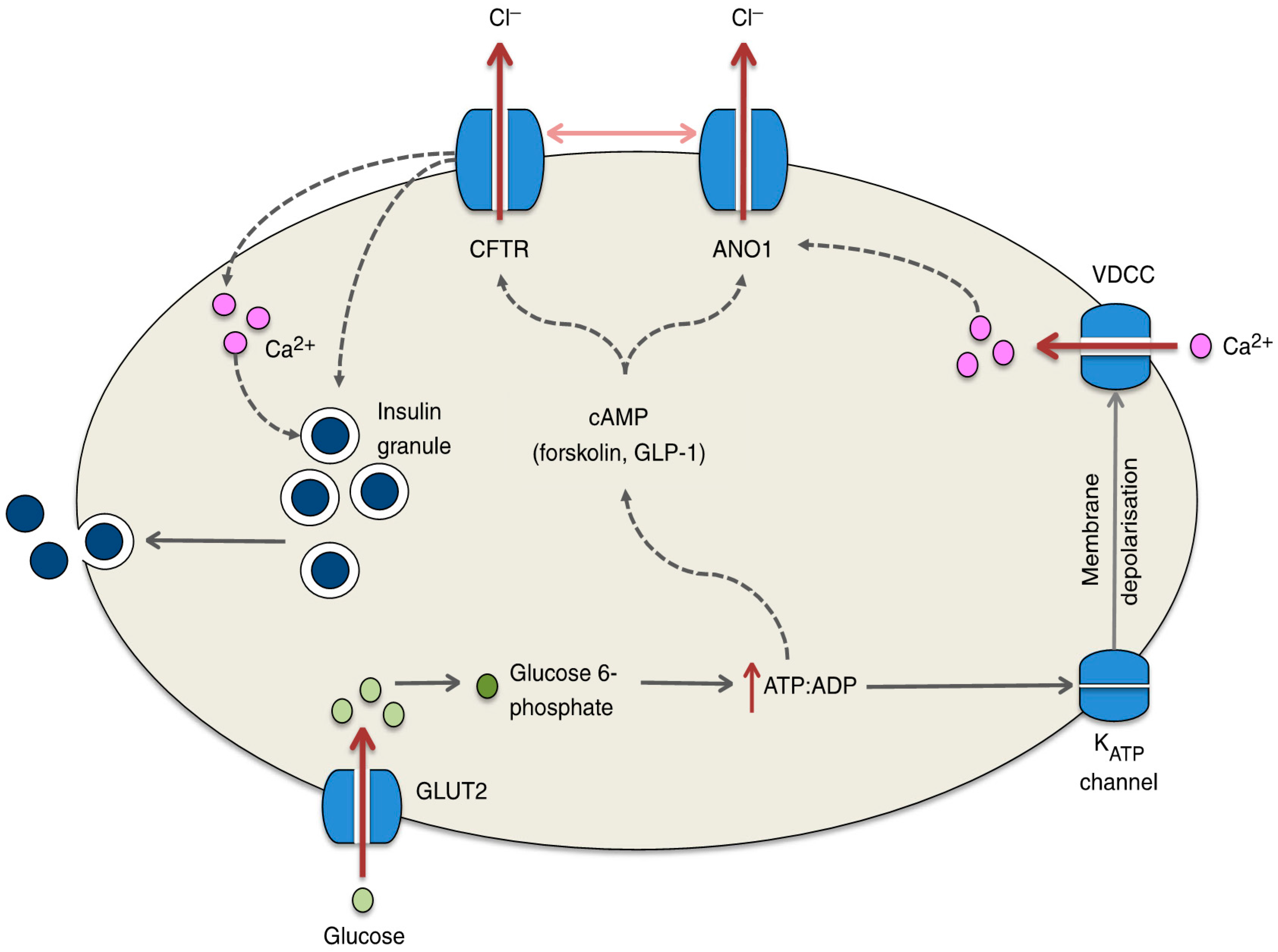