Beneficial effects of silicon (Si) on growth and development have been witnessed in several plants. Nevertheless, studies on roses are merely reported. Therefore, the present investigation was carried out to illustrate the impact of Si on photosynthesis, antioxidant defense and leaf proteome of rose under salinity stress. In vitro-grown, acclimatized Rosa hybrida ‘Rock Fire’ were hydroponically treated with four treatments, such as control, Si (1.8 mM), NaCl (50 mM), and Si+NaCl. After 15 days, the consequences of salinity stress and the response of Si addition were analyzed. Scorching of leaf edges and stomatal damages occurred due to salt stress was ameliorated under Si supplementation. Similarly, reduction of gas exchange, photosynthetic pigments, higher lipid peroxidation rate, and accumulation of reactive oxygen species under salinity stress were mitigated in Si treatment. Lesser oxidative stress observed was correlated with the enhanced activity and expression of antioxidant enzymes, such as superoxide dismutase, catalase, and ascorbate peroxidase in Si+NaCl treatment. Importantly, sodium transportation was synergistically restricted with the stimulated counter-uptake of potassium in Si+NaCl treatment. Furthermore, two-dimensional electrophoresis (2-DE) and matrix-assisted laser desorption/ionization time-of-flight mass spectrometry (MALDI-TOF MS) results showed that out of 40 identified proteins, on comparison with control 34 proteins were down-accumulated and six proteins were up-accumulated due to salinity stress. Meanwhile, addition of Si with NaCl treatment enhanced the abundance of 30 proteins and downregulated five proteins. Differentially-expressed proteins were functionally classified into six groups, such as photosynthesis (22%), carbohydrate/energy metabolism (20%), transcription/translation (20%), stress/redox homeostasis (12%), ion binding (13%), and ubiquitination (8%). Hence, the findings reported in this work could facilitate a deeper understanding on potential mechanism(s) adapted by rose due to the exogenous Si supplementation during the salinity stress. View Full-Text
Keywords: hydroponics; rose; resistance; salinity; silicate hydroponics; rose; resistance; salinity; silicate
►▼ Show Figures 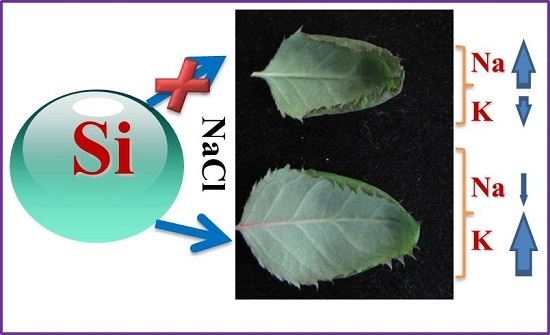