Notch Signaling in Endothelial Cells: Is It the Therapeutic Target for Vascular Neointimal Hyperplasia?
Next Article in Special Issue

Lactacystin-Induced Model of Hypertension in Rats: Effects of Melatonin and Captopril
Previous Article in Special Issue

Tanshinone IIA (Tan-IIA) is an extract from the widely used traditional Chinese medicine (TCM) Danshen (Salvia miltiorrhiza), and has been found to attenuate the proliferation of bladder cancer (BCa) cells (The IC50 were: 5637, 2.6 μg/mL; BFTC, 2 μg/mL; T24, 2.7 μg/mL, respectively.). However, the mechanism of the effect of Tan-IIA on migration inhibition of BCa cells remains unclear. This study investigates the anti-metastatic effect of Tan-IIA in human BCa cells and clarifies its molecular mechanism. Three human BCa cell lines, 5637, BFTC and T24, were used for subsequent experiments. Cell migration and invasion were evaluated by transwell assays. Real-time RT-PCR and western blotting were performed to detect epithelial-mesenchymal transition (EMT)-related gene expression. The enzymatic activity of matrix metalloproteinases (MMP) was evaluated by zymography assay. Tan-IIA inhibited the migration and invasion of human BCa cells. Tan-IIA suppressed both the protein expression and enzymatic activity of MMP-9/-2 in human BCa cells. Tan-IIA up-regulated the epithelial marker E-cadherin and down-regulated mesenchymal markers such as N-cadherin and Vimentin, along with transcription regulators such as Snail and Slug in BCa cells in a time- and dose-dependent manner. Mechanism dissection revealed that Tan-IIA-inhibited BCa cell invasion could function via suppressed chemokine (C-C motif) ligand 2 (CCL2) expression, which could be reversed by the addition of CCL2 recombinant protein. Furthermore, Tan-IIA could inhibit the phosphorylation of the signal transducer and activator of transcription 3 (STAT3) (Tyr705), which cannot be restored by the CCL2 recombinant protein addition. These data implicated that Tan-IIA might suppress EMT on BCa cells through STAT3-CCL2 signaling inhibition. Tan-IIA inhibits EMT of BCa cells via modulation of STAT3-CCL2 signaling. Our findings suggest that Tan-IIA can serve as a potential anti-metastatic agent in BCa therapy. View Full-Text
Keywords: bladder cancer; chemokine (C-C motif) ligand 2; epithelial-mesenchymal transition; signal transducer and activator of transcription 3; tanshinone IIA bladder cancer; chemokine (C-C motif) ligand 2; epithelial-mesenchymal transition; signal transducer and activator of transcription 3; tanshinone IIA
►▼ Show Figures 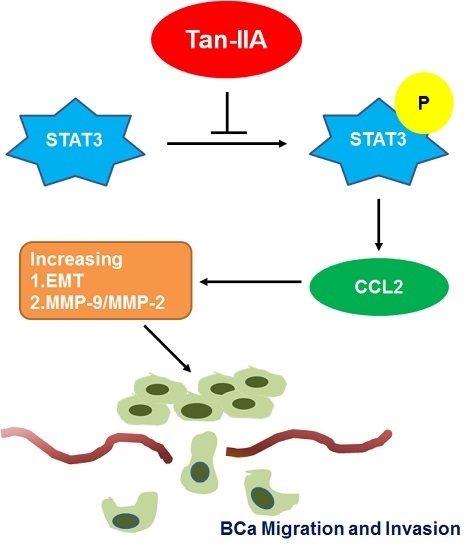