Issues of Acute Kidney Injury Staging and Management in Sepsis and Critical Illness: A Narrative Review
Next Article in Special Issue

2. Structure and Sources of the Major Dietary Phytoestrogens

Against environmental stresses and aggressions, plants produce secondary metabolites belonging to the large family of polyphenols, which have many biological activities, such as antioxidant, antifungal and antibiotic properties. All of these compounds contain one or several aromatic rings with at least one hydroxyl group. Hydroxyl groups can be free, but most of the time they are engaged in another function with an ester, ether or a glycoside. Among these compounds, phytoestrogens have a structural similarity with 17β-estradiol and could bind both ERs. Phytoestrogens are classified into six groups based on their chemical structures (Figure 2). In this review, we have chosen to present only the aglycone structure of a few phytoestrogens.

Flavonoids, from flavus (yellow in Latin), are pigments of flowers and fruit, and represent the major group. They are formed by 2 aromatic rings bearing at least one hydroxyl group. The aromatic rings, called A and B, are connected by a carbon bridge consisting of three carbons combined with an oxygen to carbons of the A ring. Together, they formed a new 6-ring structure, called C [29] (Figure 2). Flavonoids could be divided into sub-classes depending on the position of the B ring at position 2 for flavones and derivatives and at position 3 for isoflavones and derivatives. Moreover, depending on hydroxylation degree and/or the position of the hydroxyl group, one can distinguish the flavan-3-ols, the flavanones and the flavonols [29].
Here, we have focused on flavones and isoflavones. Flavones are represented by compounds, such as apigenin, found in parsley or chamomile. Apigenin has a beneficial effect on human health [30]. The daily intake of flavones is very low and estimated between 0.3 and 1.6 mg/day [31]. Isoflavones such as genistein or daidzein are found in large quantities in soybean. The daily intake of isoflavones is low in Western countries (0.1–1.2 mg/day) and higher in Asian countries, where they consume more soy product (up to 47 mg/day) [29,32]. Approximately 30% of the population in Western countries and 60% of the population in Asian countries possess gut microbiota able to metabolize daidzein into the isoflavan equol, which shows a greater affinity for ERs than daidzein. Equol exists through two enantiomers, the R-(+) equol and the S-(−) equol. This latter enantiomer is the natural compound produced by microbiota in human and rat [33].

Pterocarpans derive from isoflavones. Their structure is described as a benzo-pyrano-furano-benzene, where the B-rings are coupled to position 4-one [34]. Glyceollins, which correspond to prenylated 6a-hydroxy pterocarpans, are the main delegates of this family [35]. They belong to phytoalexin and are produced from daidzein via an enzymatic pathway, mainly in soybean, by the action of a diversity of elicitors such as UV stress, bacterial or fungi infection [36]. These compounds have been known since the 1970s for their involvement in plant defense [37], but the ability of these compounds to act as phytoestrogens was only established in 2000 [38].

Coumestans are produced by oxidation of pterocarpan [39]. The structure of coumestans consists of a benzoxazole fused to a chromen-2-one [40]. The first, discovered in 1957 by Bickoff et al., and the best documented is coumestrol, which is abundant in alfalfa, soybean and clover [41]. This compound was shown to have a high affinity for both ERs and to induce a response of the same magnitude as that observed with E2 [42].

Like glyceollins, stilbene belongs to the phytoalexins and participates in plant defense against injury, stress or infection [29]. Resveratrol, the main representative of the stilbene family, is abundant in grape and red wine, with a concentration up to 12 mg/L [43]. Although resveratrol was reported to interact with ERs, its agonist or antagonistic effects remain controversial [44,45].

The two best-documented lignans are secoisolariciresinol and matairesinol [46]. Lignans are particularly abundant in flaxseed and sesame seed, and at minor concentrations in cereals, vegetables and fruits. The two major metabolites of lignans in human are also produced by gut microbiota. They present a weak estrogenic action and are called enterolactone and enterodiol [47].

Another family of dietary estrogen, called mycoestrogens, is produced by fungi. In this family, the most documented is zearalenone and its derivatives. Zearalenone is produced by Fusarium and is found in poorly stored cereals. Zearalenone structure consists of resorcinol moiety fused with a 14-member macrocyclic lactone [48]. According to the European Safety Authority (EFSA), zearalenone is found in 15% of cereals consumed in Europe [49]. Zearalenone has adverse effects on human health, including reprotoxicity [50,51], genotoxicity, and oxidative stress [49]. This chemical and its metabolites, particularly α-zearalenol, which is used as growth promoter in cattle, are able to bind ERs with high affinity and act as strong ERα agonists [51].

3. In Vitro Effects of Phytoestrogens

4. In Vivo Effects of Phytoestrogens

Although more research is needed, it is clear that some natural compounds from plants, such as phytoestrogens, could have beneficial effects on certain diseases, such as cancer or neurodegenerative diseases. However, in vitro or in vivo studies to analyze the final effects of phytoestrogens may be quite different at low (<1 μM) or high concentrations (>10 μM). For instance, at low doses (from 10 nM to 1 μM), genistein showed mitogenic effects on breast cancer cell growth, whereas at higher concentrations (>10 μM), it showed antiproliferative effects [123,124]. Some of these effects are explained by their interactions with ER subtypes. The ratios and the expressions of ERα and ERβ are different in various tissues depending on the period of life. ERα is mostly expressed in tissues such as the mammary gland, uterus, liver and pituitary, while ERβ is expressed in tissues such as the brain, bone and bladder. Moreover, the abilities of ER subtypes to recruit cofactors, regulate gene expression and stimulate or inhibit cell growth are slightly different. Therefore, in vivo, phytoestrogens may have a complex role, acting as weak estrogens and antiestrogens depending on the tissue. Furthermore, it is believed that the signaling pathways induced by phytoestrogens are not completely identical to those induced by estrogens. As illustrated in Figure 3, phytoestrogens may have different mechanisms of action; therefore, some of these compounds could be considered therapeutic agents and used alone or in combination with usual hormone therapies. For example, the protective effect of isoflavones on prostate cancer may be related to their effects on metabolic pathways involved in androgen and estrogen synthesis [125] or to their epigenetic modifications of DNA, such as the demethylation of CpG islands within the promoters of tumor suppressor genes [81,126,127]. On the other hand, the phytoestrogen coumestrol, which exhibits an important cancer-preventive effect in estrogen-responsive carcinomas, was recently reported to inhibit epithelial ovarian cancer proliferation and invasion by modifying AKT, p70S6K and ERK1/2 phosphorylation [128]. Moreover, previous studies showed an antagonistic effect of genistein and apigenin against the association of ERα with the ubiquitous calcium-dependent protein, calmodulin (CaM). By interacting with ERα, CaM plays a key role in the stabilization and transcriptional activity of ERα dimers at the ERE. The agonistic effect of genistein and apigenin in this interaction may also account for the anti-tumor origin of these compounds against ER-positive breast cancers [129,130]. It is, therefore, essential to continue advances in the understanding diverse signaling pathways activated by phytoestrogens, to fully exploit their anticancer properties and/or their potential roles in estrogen-related diseases. Accordingly, it should also be remembered that changes in the expression or activity of nuclear and membrane receptors for steroids and growth factors, as well as key steroid synthesis enzymes, during cancer progression could play crucial roles in the effects of phytoestrogens (Figure 3). Indeed, flavonoids, especially flavones (ex: luteolin) and flavanones (ex: naringenin), are described as potent inhibitors of aromatase activity [131]. Aromatase is the main enzyme that participates in the transformation of testosterone into estradiol and is hence involved in breast cancer pathology. Moreover, luteolin was also shown to downregulate aromatase gene expression [131]. Phytoestrogens are also able to inhibit proteasome [132], which appears to be essential for breast cancer cell survival [133]. For example, apigenin is capable of inhibiting the catalytic activity of proteasomes, leading to stabilization of ERβ and apoptosis of prostate cancer cells [134].
An important application of phytoestrogens is that they could be used as an alternative to the synthetic selective estrogen receptor modulators (SERMs), which exhibit estrogen agonist or antagonist activity in a tissue-specific manner. Indeed, SERMs are used in the treatment of some estrogen-associated pathologies, such as breast cancer, brain diseases, osteoporosis and menopausal symptoms. In other words, the challenge is to minimize the adverse effects of ER (mitogenic effect) without reducing the beneficial effects (protective effects), such as the control of cell differentiation, neuroprotection, anti-osteoporosis effects, and anti-oxidant activity. Our recent study screening the SERM activity of these compounds revealed a beneficial effect of apigenin and resveratrol, whereas zearalenone has been characterized as having a strong ER-agonist property in breast cancer cell lines and having adverse effects in neuritogenesis [135].
Although recent studies have reported that certain environmental agents caused epigenetic effects that could act across generations, leading to physiological changes of the offspring, there are no examples of perinatal exposure to phytoestrogens at environmentally relevant doses. There is still a need to understand the molecular mechanisms and to investigate how these compounds can influence epigenetic patterns during development.
In this review, we have discussed the effects of phytoestrogens used alone. However, populations are exposed to several compounds at the same time. Thus, it might be important to perform studies of the effect of mixtures of botanical estrogen on human health to improve recommendations for public health. 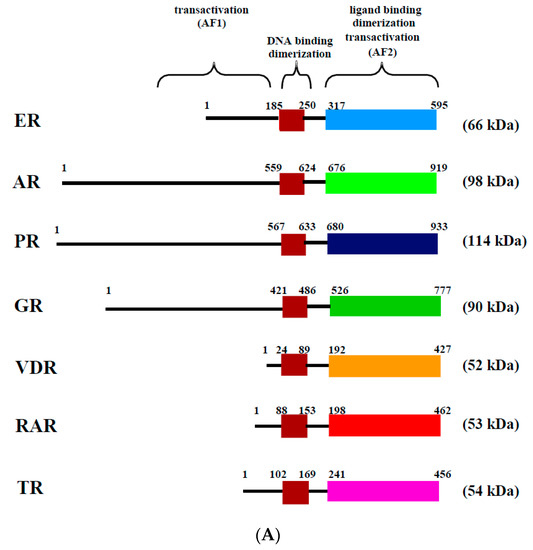 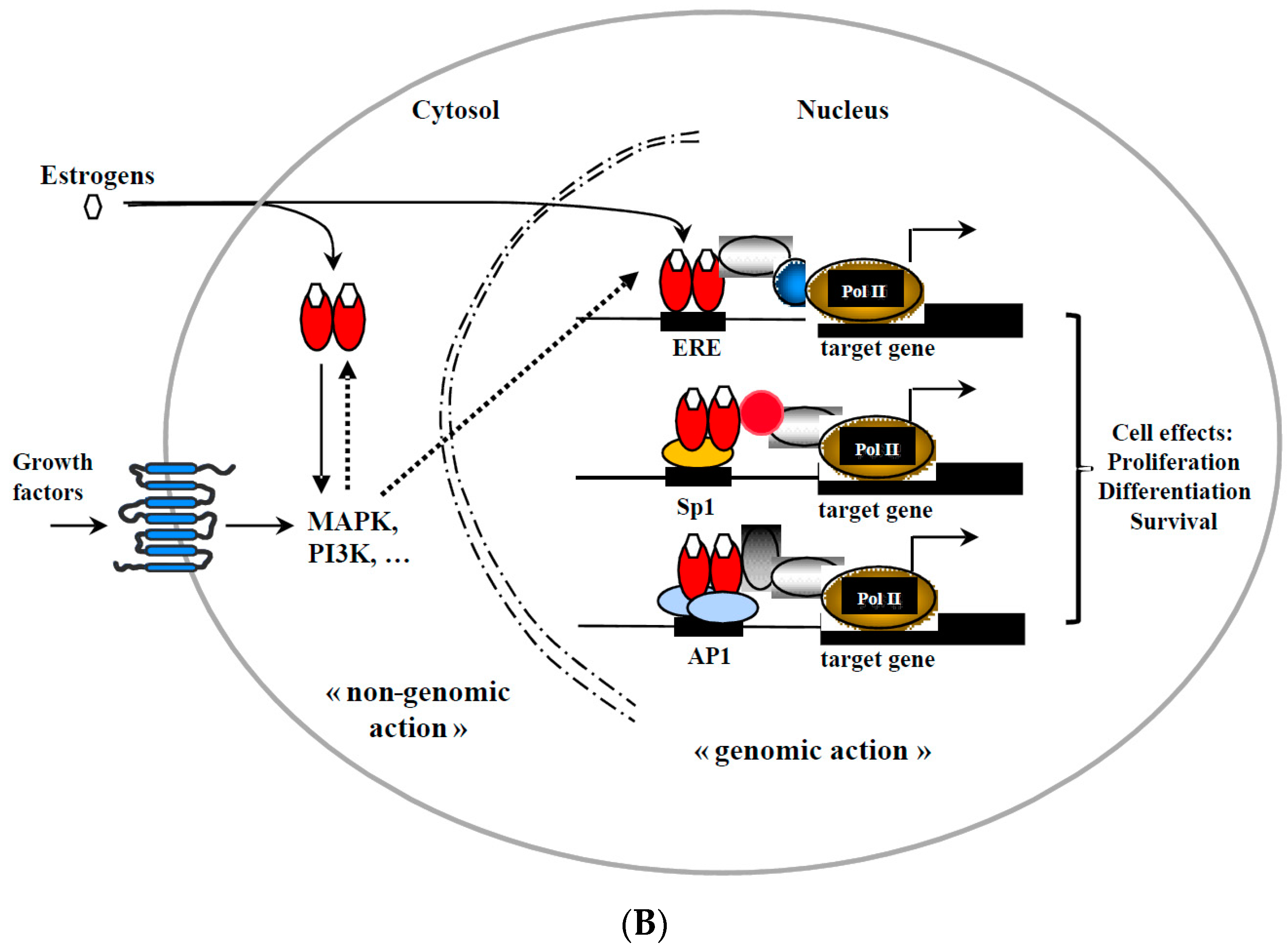