A Novel Combination of Withaferin A and Sulforaphane Inhibits Epigenetic Machinery, Cellular Viability and Induces Apoptosis of Breast Cancer Cells

2. Aberrant DNA Methylation as a Biomarker of Cholangiocarcinoma

Malignant tumors developing in the biliary tract are difficult to diagnose at an early stage because of their anatomical locations. In addition, useful biomarkers for biliary tract cancers have not been developed. Most cholangiocarcinoma patients are diagnosed at an advanced stage, and aggressive cancers easily infiltrate surrounding organs and become unresectable. The early detection of cholangiocarcinoma might improve the prognosis of patients, and the development of useful biomarkers of cholangiocarcinoma would be beneficial for prompt and more effective treatment. One of the most powerful biomarkers in cancer is DNA methylation of tumor suppressor genes. We summarized genes frequently methylated in cholangiocarcinoma in Table 1.
MLH1 protein is one component of a system of seven DNA mismatch repair (MMR) proteins that work coordinately in sequential steps to initiate the repair of DNA mismatches in humans. Several studies have demonstrated that DNA hypermethylation on the promoter region of the hMLH1 gene is associated with a poor prognosis of patients with cholangiocarcinoma [14,15]. The DCLK1, CDO1, ZSCAN18, and ZNF331 genes have been identified as novel biomarkers of colorectal cancers, and these genes are frequently methylated across gastrointestinal cancers including cholangiocarcinoma [16]. A negative correlation between promoter DNA methylation and gene expression has been observed for the DCLK1, CDO1, ZSCAN18, and ZNF331 genes, suggesting that aberrant DNA methylation of these genes indicates epigenetic similarities among gastrointestinal cancers such as colon, pancreatic, and bile duct cancer. The INK4a-ARF (CDKN2A) locus on chromosome 9p21 encodes two tumor suppressor proteins, p16 (INK4a) and p14 (ARF), whose functions are inactivated in many human cancers. Recent studies have shown that p16 (INK4a) and p14 (ARF) are inactivated by DNA hypermethylation in cholangiocarcinoma, which may result in cell cycle dysregulation [17,18]. Liu et al. demonstrated that the death-associated protein kinase (DAPK) gene is suppressed by promoter hypermethylation in cholangiocarcinoma. Silencing of the DAPK gene by DNA hypermethylation results in resistance to apoptosis and immunological surveillance [22]. In addition, it has been reported that p53 mutation combined with DNA methylation of the DAPK, p14 (ARF), and ASC genes correlates with malignancy and poor prognosis of patients with cholangiocarcinoma [19].
Cancer cells are considered to be heterogeneous with a hierarchy of “stemness” in solid cancer tissues. Stem cells have the ability to self-renew and to generate mature cells of various tissues through differentiation. Cancer stem cells, a subpopulation of cancer cells with distinct stem-like properties, is responsible for tumor initiation, invasive growth, and metastasis formation [26]. As cancer stem cells are resistant to conventional chemotherapies and radiation therapy, it would be desirable to develop a therapeutic strategy specifically targeting cancer stem cells. Sriraksa et al. reported that hypermethylation of multiple CpG sites of genes associated with a stem cell-like phenotype is a common molecular aberration in cholangiocarcinoma [27], indicating that aberrant DNA methylation plays a critical role in “cancer stemness” of cholangiocarcinoma.
Early diagnosis is very important for patients with refractory cancers, but detection of cholangiocarcinoma at an early stage is still challenging because it is difficult to visualize biliary tract tumors by existing imaging modalities [28]. In order to overcome this problem, Shin et al. developed a useful method for the detection of cholangiocarcinoma cells using bile fluid [23]. This method involving DNA methylation assay consisting of a five-gene panel (CCND2, CDH13, GRIN2B, RUNX3 and TWIST1) is able to detect cholangiocarcinoma cells with a sensitivity of 83% and a specificity of 100%. Less invasive examinations such as this method using bile fluid are important for minimizing the burden on the patient. These studies have shown that detection of DNA methylation is a powerful diagnostic strategy for patients with cholangiocarcinoma.

4. Suppression of Tumor Suppressor miRNAs by DNA Methylation in Cholangiocarcinoma

Other anti-tumor effects of chromatin-modifying drugs have been demonstrated in cancers including colon cancer. One of these other anti-tumor effects is the induction of tumor cell differentiation. Hatano et al. previously showed that DNA demethylation exerts a tumor-suppressive effect on colon cancers by inducing tumor differentiation [41]. They found that the promoter region of the Caudal type homeobox 1 (CDX1) gene was methylated specifically in colon cancer cells. The upregulation of CDX1 increased the expression of genes related to intestinal differentiation. This suggested that the promoters of transcriptional factor genes regulating cell differentiation were silenced by DNA hypermethylation in colon cancer cells to sustain their undifferentiated status.
Recent studies have proved that the major effect of DNA methylation inhibitors is to induce interferon-responsive genes by increasing double-stranded RNA (dsRNA) containing endogenous retrovirus (ERV) [42,43]. Different ERV gene families constitute about 8% of the human genome and are considered to be long terminal repeat [44] retrotransposons. Innate immune responses are activated by the expression of ERV-producing nucleic acids or proteins with viral signatures [45]. Roulois et al. recently proposed that 5-Aza-CdR could be used to target colorectal cancer stem cells by inducing viral mimicry [42]. Their data suggested that the induction of dsRNAs is derived at least in part from ERV elements, which activate the MDA5/MAVS RNA recognition pathway. Figure 3 shows a scheme for the activation of an anti-viral immune response induced by the inhibition of DNA methylation. In a normal state, the 5′ long terminal repeat (LTR) sequences of ERVs are heavily methylated and the expression of ERVs is silenced. When DNA methylation at the 5′ LTR sequences is inhibited by DNA methylation inhibitors, the expression of ERVs is induced. Increased expression of dsRNAs derived from ERVs leads to the induction of an anti-viral immune response such as the activation of interferon-responsive genes.
We also reported that DNA methylation inhibition suppresses intestinal tumor organoids by inducing anti-viral response [46]. We established tumor organoids derived from the Apcmin/+ mouse, a model of colon cancer, using a new 3D culture system that allows Lgr5-positive stem cells to form cyst-like structures (organoids) [47]. This organoid culture system closely recapitulates the properties of the original tumors, and is useful for drug screening and precision medicine [48]. We demonstrated that 5-Aza-CdR shrinks intestinal tumor organoids derived from Apcmin/+ mice [46]. We revealed that the expression of interferon-responsive genes such as Irf7, Rig1 and Mda5 was increased by DNA methylation inhibition in tumor organoids after 5-Aza-CdR treatment or Dnmt1 knockdown. The expression of murine ERVs was significantly upregulated after the treatment of tumor organoids with 5-Aza-CdR. These findings suggested that treatment with DNA methylation inhibitors to activate an innate immune response would be beneficial for patients with various types of cancers including cholangiocarcinoma. Wrangle et al. showed that DNA methylation inhibitors can upregulate transcripts and protein of PD-L1, a key ligand mediator of immune tolerance [49]. Through analysis of samples from The Cancer Genome Atlas (TCGA), they also demonstrated that a significant proportion of primary non-small cell lung cancers (NSCLCs) have a low expression of DNA methylation inhibitor-induced immune genes such as PD-L1. Their data suggested that a combination of chromatin-modifying agents with immune checkpoint blockade therapies would activate the immune response of the host to cancer cells.
The development of anti-metabolite drugs that are dependent on the cell cycle of cancer cells has revealed a serious problem in that they also act on normal cells and normal stem cells. Therefore, molecular targeting therapeutic agents have been developed to avoid seriously damaging normal cells. One such molecular targeting therapeutic agent is herceptin, approved for the treatment of breast cancer. Although herceptin has improved the relapse-free survival of patients with breast cancer [50], it is still very difficult to eliminate the cancer completely, because cancers have various mutations and different forms of aberrant epigenetic status. In this respect, chromatin-modifying drugs have great promise for cancer therapy because the modification of epigenetic status alone can inhibit various tumor characteristics such as proliferation, migration, invasion, and dedifferentiation. It has been demonstrated that reprofiling of food and drug administration (FDA)-approved drugs in combination with chromatin-modifying drugs can be implemented into clinical trials for colon cancer [51].
In conclusion, aberrant DNA methylation of tumor suppressor genes and miRNAs could be a powerful biomarker for the diagnosis and treatment of cholangiocarcinoma. Epigenetic therapy with DNA methylation inhibitors hold considerable promise for the treatment of cholangiocarcinoma through the reactivation of tumor suppressor genes and miRNAs as well as the induction of an anti-viral immune response. 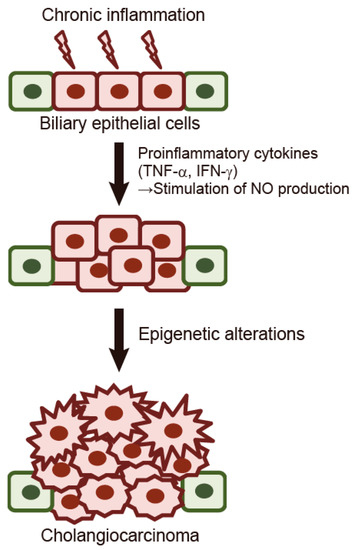 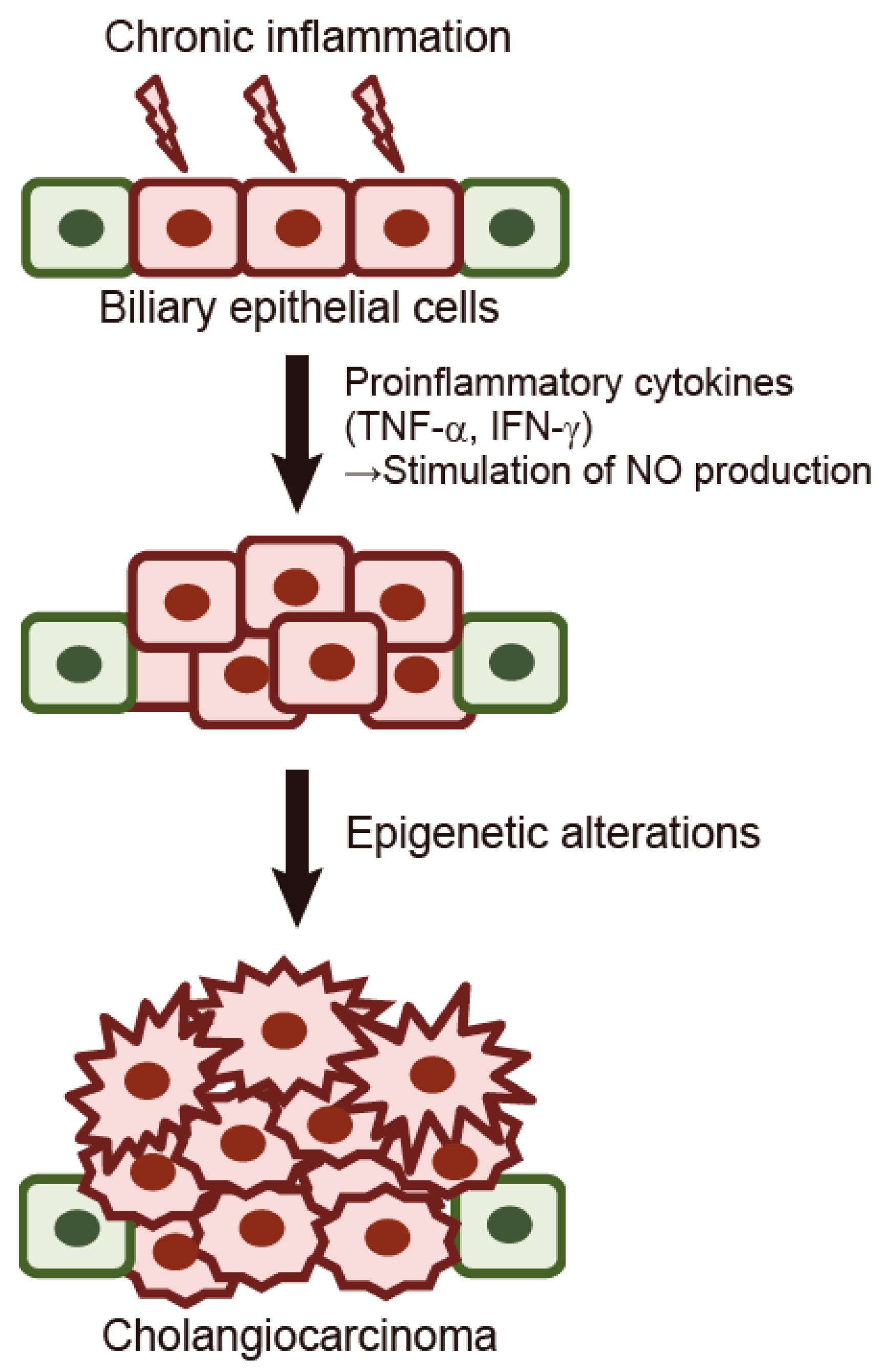 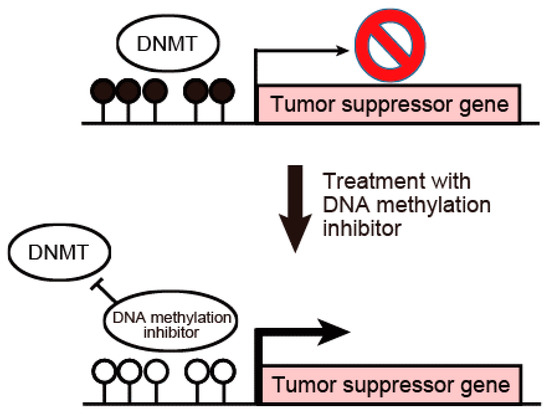 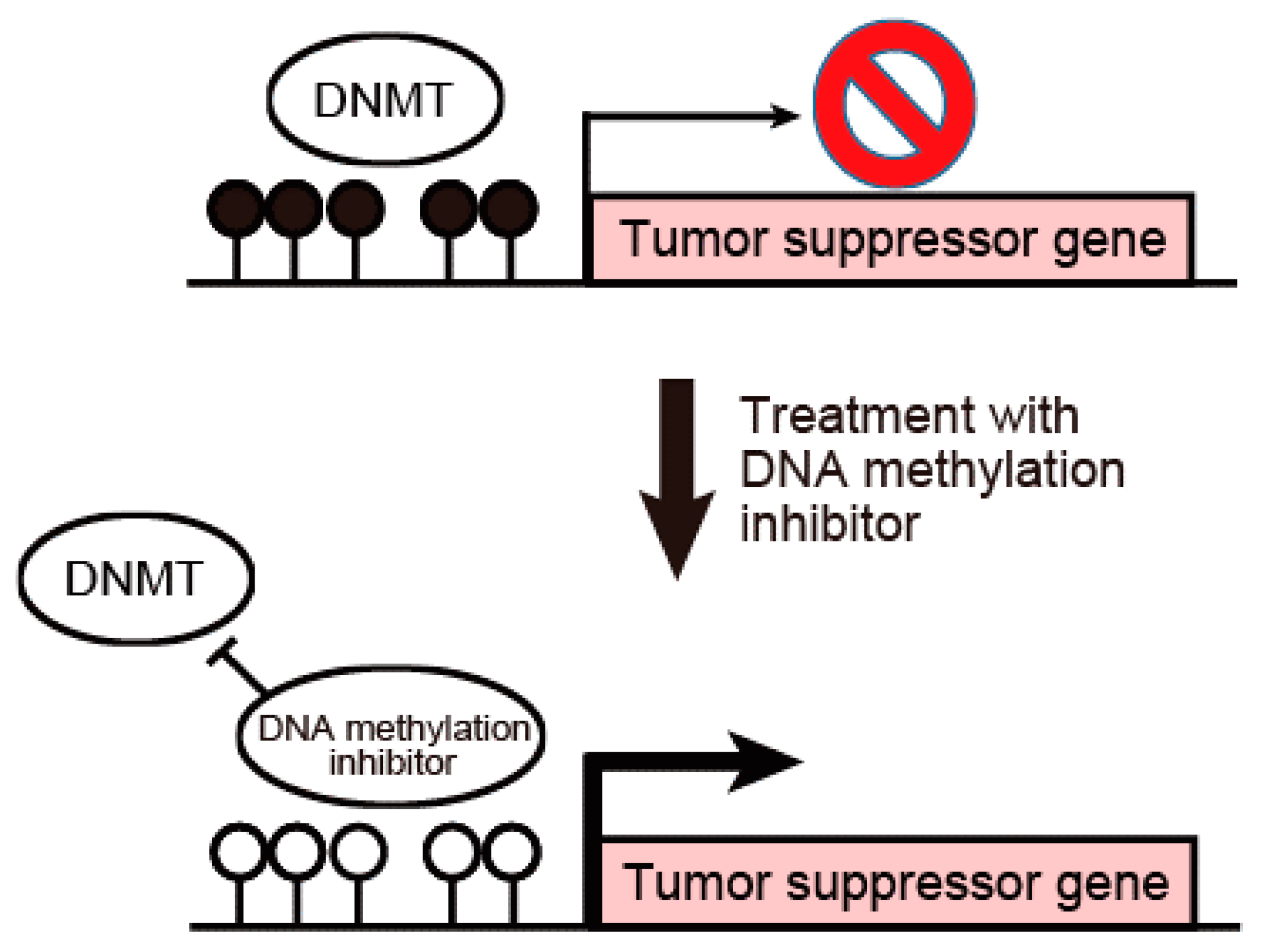 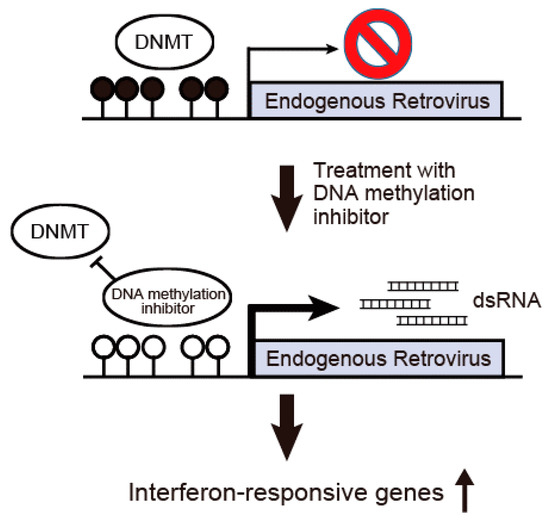 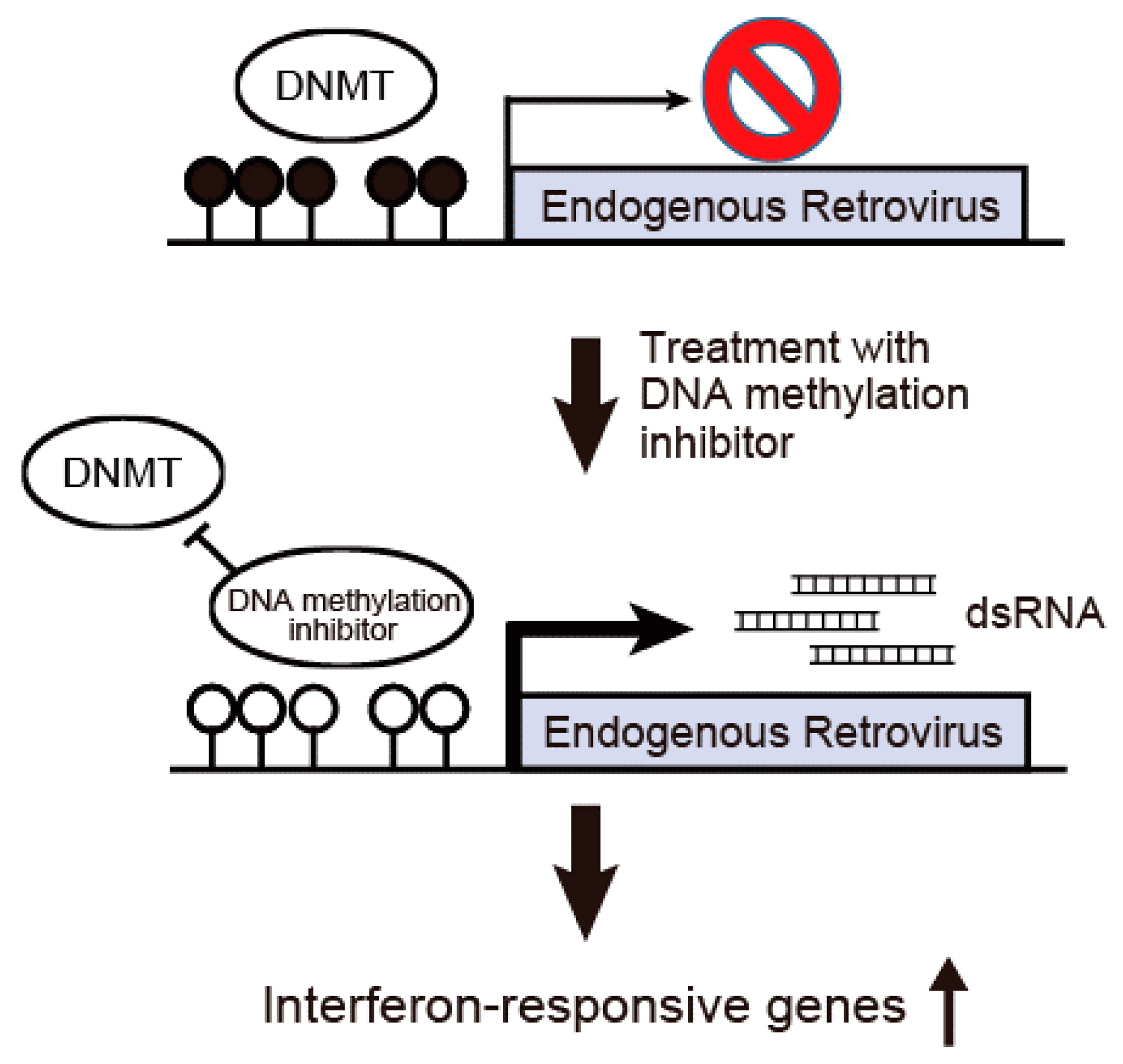 Table 2. miRNAs frequently methylated in cholangiocarcinoma.
Table 2. miRNAs frequently methylated in cholangiocarcinoma.
© 2017 by the authors. Licensee MDPI, Basel, Switzerland. This article is an open access article distributed under the terms and conditions of the Creative Commons Attribution (CC BY) license (http://creativecommons.org/licenses/by/4.0/).
We use cookies on our website to ensure you get the best experience. Read more about our cookies here.
Accept
We have just recently launched a new version of our website. Help us to further improve by taking part in this short 5 minute survey here. here.
Never show this again