Action of Thyroid Hormones, T3 and T2, on Hepatic Fatty Acids: Differences in Metabolic Effects and Molecular Mechanisms
Next Article in Special Issue

A Novel Perspective on the ApoM-S1P Axis, Highlighting the Metabolism of ApoM and Its Role in Liver Fibrosis and Neuroinflammation
Previous Article in Journal

Beyond their role as structural molecules, sphingolipids are involved in many important cellular processes including cell proliferation, apoptosis, inflammation, and migration. Altered sphingolipid metabolism is observed in many pathological conditions including gastrointestinal diseases. Inflammatory bowel disease (IBD) represents a state of complex, unpredictable, and destructive inflammation of unknown origin within the gastrointestinal tract. The mechanisms explaining the pathophysiology of IBD involve signal transduction pathways regulating gastro-intestinal system’s immunity. Progressive intestinal tissue destruction observed in chronic inflammation may be associated with an increased risk of colon cancer. Sphingosine-1-phosphate (S1P), a sphingolipid metabolite, functions as a cofactor in inflammatory signaling and becomes a target in the treatment of IBD, which might prevent its conversion to cancer. This paper summarizes new findings indicating the impact of (S1P) on IBD development and IBD-associated carcinogenesis. View Full-Text
Keywords: inflammatory bowel disease; sphingosine-1-phosphate; cancer inflammatory bowel disease; sphingosine-1-phosphate; cancer
►▼ Show Figures 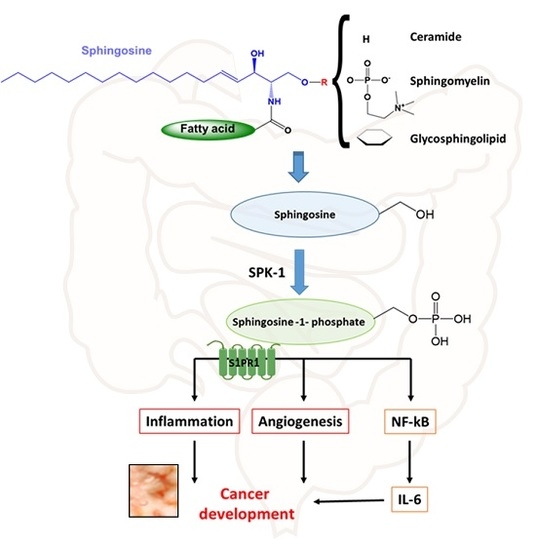