Effects of a Sativex-Like Combination of Phytocannabinoids on Disease Progression in R6/2 Mice, an Experimental Model of Huntington’s Disease

Several cannabinoids afforded neuroprotection in experimental models of Huntington’s disease (HD). We investigated whether a 1:1 combination of botanical extracts enriched in either ∆9-tetrahydrocannabinol (∆9-THC) or cannabidiol (CBD), which are the main constituents of the cannabis-based medicine Sativex®, is beneficial in R6/2 mice (a transgenic model of HD), as it was previously shown to have positive effects in neurotoxin-based models of HD. We recorded the progression of neurological deficits and the extent of striatal deterioration, using behavioral, in vivo imaging, and biochemical methods in R6/2 mice and their corresponding wild-type mice. The mice were daily treated, starting at 4 weeks after birth, with a Sativex-like combination of phytocannabinoids (equivalent to 3 mg/kg weight of pure CBD + ∆9-THC) or vehicle. R6/2 mice exhibited the characteristic deterioration in rotarod performance that initiated at 6 weeks and progressed up to 10 weeks, and elevated clasping behavior reflecting dystonia. Treatment with the Sativex-like combination of phytocannabinoids did not recover rotarod performance, but markedly attenuated clasping behavior. The in vivo positron emission tomography (PET) analysis of R6/2 animals at 10 weeks revealed a reduced metabolic activity in the basal ganglia, which was partially attenuated by treatment with the Sativex-like combination of phytocannabinoids. Proton nuclear magnetic resonance spectroscopy (H+-MRS) analysis of the ex vivo striatum of R6/2 mice at 12 weeks revealed changes in various prognostic markers reflecting events typically found in HD patients and animal models, such as energy failure, mitochondrial dysfunction, and excitotoxicity. Some of these changes (taurine/creatine, taurine/N-acetylaspartate, and N-acetylaspartate/choline ratios) were completely reversed by treatment with the Sativex-like combination of phytocannabinoids. A Sativex-like combination of phytocannabinoids administered to R6/2 mice at the onset of motor symptoms produced certain benefits on the progression of striatal deterioration in these mice, which supports the interest of this cannabinoid-based medicine for the treatment of disease progression in HD patients. View Full-Text
Keywords: phytocannabinoids; cannabidiol; Δ9-tetrahydrocannabinol; Huntington’s disease; R6/2 mice; basal ganglia; neuroprotection phytocannabinoids; cannabidiol; Δ9-tetrahydrocannabinol; Huntington’s disease; R6/2 mice; basal ganglia; neuroprotection
►▼ Show Figures 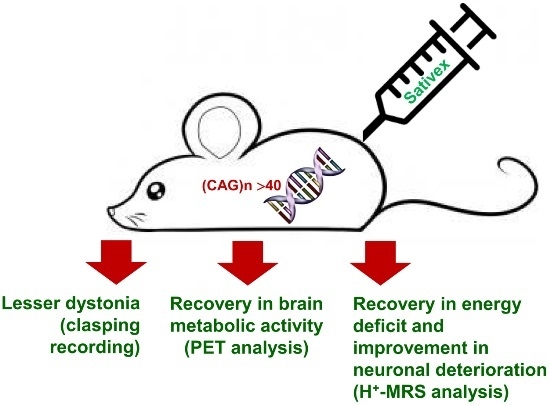