In Silico and In Vitro Analysis of Interaction between Ximelagatran and Human Leukocyte Antigen (HLA)-DRB1*07:01
Previous Article in Journal

Although ketoconazole (KCZ) has been used worldwide for 30 years, its metabolic characteristics are poorly described. Moreover, the hepatotoxicity of KCZ limits its therapeutic use. In this study, we used liquid chromatography–mass spectrometry-based metabolomics to evaluate the metabolic profile of KCZ in mouse and human and identify the mechanisms underlying its hepatotoxicity. A total of 28 metabolites of KCZ, 11 of which were novel, were identified in this study. Newly identified metabolites were classified into three categories according to the metabolic positions of a piperazine ring, imidazole ring, and N-acetyl moiety. The metabolic characteristics of KCZ in human were comparable to those in mouse. Moreover, three cyanide adducts of KCZ were identified in mouse and human liver microsomal incubates as “flags” to trigger additional toxicity study. The oxidation of piperazine into iminium ion is suggested as a biotransformation responsible for bioactivation. In summary, the metabolic characteristics of KCZ, including reactive metabolites, were comprehensively understood using a metabolomics approach. View Full-Text
Keywords: ketoconazole; metabolite profiling; bioactivation; metabolomics ketoconazole; metabolite profiling; bioactivation; metabolomics
►▼ Show Figures 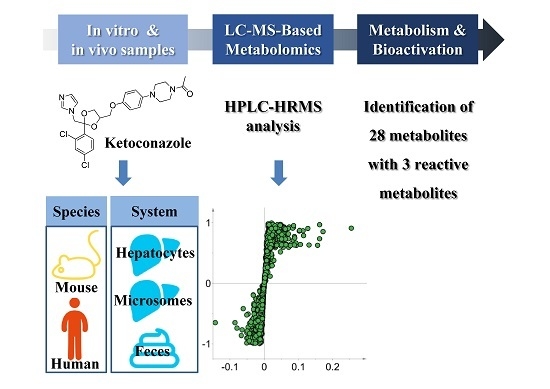