2.1. Co-Treatment of HTB-34 Cells with Met and CA Potentates Cell Death via Apoptosis, Inhibits Proliferation of Cells and Induces Changes in Cell Cycle

As shown in Figure 2A, CA activated AMPK in HTB-34 cells, while Met failed to phosphorylate the enzyme. CA also phosphorylated Acetyl-CoA carboxylase 1 (ACC1) at S79,80. The similar effect was measured in cells exposed to CA/Met. ATP content was decreased in cells exposed to CA and Met/CA. CA downregulated glucose transporter GLUT1 expression alone and as co-treatment with Met (Figure 2B). CA and CA/Met treatment decreased Phosphofructokinase 2 (PFK2) activity by its dephosphorylation on S466 residue. To examine the effect of Met and CA on the process of oxidative decarboxylation, the phosphorylation (deactivation) of Pyruvate Dehydrogenase Complex (PDH) at S293 by the action of Pyruvate Dehydrogenase Kinase (PDK) was assessed. The activation of PDH caused by CA was followed by significant decrease in PDK activity (p < 0.05 vs. untreated control). Met inhibited PDH activity and caused significant rise in PDK activity (p < 0.01 vs. untreated control). CA, when co-treated with Met, antagonized its effect on PDH phosphorylation and PDK activity. Any changes in expression of glutaminase (GLS) were not observed (Figure 2B).
The exposition of HTB-34 cells to CA significantly inhibited glucose consumption (Figure 2C, p < 0.001 vs. Met, p < 0.001 vs. CA/Met) and substantially decreased the lactate level in medium when compared to the effect of Met (Figure 2C, p < 0.001 vs. Met, p < 0.001 vs. CA/Met). The co-treatment of HTB-34 cells with Met and CA significantly limited lactate excretion compared with Met-treated cells (p < 0.05 vs. Met).

In present experiments mitochondrial superoxide formation was measured by MitoSox staining followed by cytometry analysis. As shown in Figure 3A, CA was a most potent ROS inducer and the effect was preserved after co-treatment with Met, while Met itself caused no effect (p < 0.05 for CA vs. Met, p < 0.05 for CA vs. CA/Met), as also shown on microphotographs (Figure 3B).

During energy depletion, AMPK inhibits FA synthesis not only by direct phosphorylation and inactivation of ACC1, but also by exerting the effect on regulatory enzymes of the pathway at the level of gene expression [11,12]. Therefore, we investigated whether Met and CA may decrease FA de novo synthesis by downregulation of enzymes: ATP Citrate Lyase (ACLY), Fatty Acid Synthase (FAS), Stearoyl-CoA Desaturase-1 (SCD1), and Fatty Acyl-CoA Elongase 6 (ELOVL6). Met caused a decrease in protein amounts of all enzymes, as shown in Figure 4A. The quantitation of total unsaturated lipids in HTB-34 cells exposed to compounds revealed the same pattern, since Met alone and as co-treatment with CA significantly decreased the amount of FA (p < 0.05 for Met vs. untreated control, p < 0.01 for Met/CA vs. untreated control) (Figure 4B).

Human cell line HTB-34 (ATCC designation MS751) was derived from the American Type Cell Culture collection. Cells were maintained as a monolayer culture in EMEM-Eagle’s Minimum Essential Medium (Lonza, Walkersville, MD, USA), supplemented with 10% v/v FBS (Eurex Sp z o.o., Gdansk, Poland) and 50 µg/mL of gentamicin, at 37 °C in a humidified atmosphere of 5% CO2 and passaged twice a week. For experiments, HTB-34 cells at a density of 1.5 × 105 cells/mL were placed in cell culture plates (Sarstedt, Numbrecht, Germany) and incubated to reach adequate confluency. Then cells were washed with PBS solution (Lonza) and kept for 24 h in EMEM-containing antibiotic and 0.5% v/v of bovine serum albumin (BSA, Sigma-Aldrich, Seelze, Germany). This step was taken in attempt to silence cells, since the amount of insulin in serum-containing medium may be higher compared with cells in vivo. Then the medium was replaced with a new EMEM/0.5% BSA with adequate volumes of stock solution of CA (100 µM/L, Sigma-Aldrich) or Met (10 mM, Sigma-Aldrich) or CA (100 µM) and Met (10 mM) and exposition of cells to appropriate compound was continued for 24 h. The 1% (v/v) of CA solvent, dimethyl sulfoxide (DMSO) was added to an untreated control and to Met containing wells. After incubation, cells and media were collected.
The number of cells was assessed by automatic cell counter Countess (Gibco Laboratories, Gaithersburg, MD, USA). The morphology of cell culture was investigated by an inverted light microscope (Olympus IX-70 microscope with fluorescence, Olympus, Hamburg, Germany). Representative images were obtained at 20× magnification.

MTT, 3-[4,5-dimethylthiazol-2yl]-2,5-diphenyl tetrazolium bromide was purchased from Sigma-Aldrich, Seelze, Germany. Briefly, 200 μL of a suspension of exponentially dividing cells was placed in each well of a 96-well microtiter plate (Sarstedt, Numbrecht, Germany) in medium. Untreated cells were cultured in medium and solvent (positive control, 100% of growth). The test was conducted as described previously [37]. The absorbance was measured at 570 nm (the reference wavelength was 630 nm) using a microplate reader Infinite M200 Pro (Tecan, Salzburg, Austria).

The cytotoxicity was measured as Lactate Dehydrogenase (LDH) leakage from cells exposed to compounds and determined by using commercially available BIOLABO SAS–L.D.H. (LDH-P) SFBC Modified Method kit according to manufacture protocol (Biolabo S.A., Maizy, France). For LDH test, cells were seeded into a 96-well plate and exposed to drugs as described in 4.1. Afterwards, 24 h of incubation media were collected and cells were lysed (Triton-X, 1% v/v, Sigma-Aldrich) to release the intracellular LDH. Then NADH concentration generated in the reaction of the reduction of pyruvate was measured at 340 nm using microplate reader (Tecan). For each sample the result was given as the percentage of LDH in the medium versus total LDH activity in the cells.

For the Preparation of mitochondria, liver mitochondria were isolated from cells exposed to compounds and prepared as described in [39]. Protein amount was assayed by Bradford method. For the assessment of PDK, mitochondria were incubated for 25 min in KCl medium (120 mM KCl, 20 mM Tris-hydrochloride, pH 7.4, 5 mM K2HPO4, 2 mM EGTA) containing 10 µM of uncoupler carbonyl cyanide-chlorophenylhydrazone to convert inactive PDH complex into active.
For the enzyme assay, PDK activity in mitochondrial extracts was measured according to Wu et al. [39]. For the assay, mitochondrial pellets were disrupted in extraction buffer (50 mM K2HPO4, 10 mM EGTA, 2 mM DTT, 1% BSA, 0.5% Triton-X100). PDK activity was expressed as the rate of ATP-dependent inactivation of the PDH complex and calculated as the apparent first-order rate constant.

HTB-34 cells were seeded into multi-well plates and exposed to compounds for 24 h, as described above, and then culture media were collected. Glucose concentration in media was determined using a colorimetric test (Sigma-Aldrich) and lactate release from cells was determined in media using commercially available kit (Sigma-Aldrich). Both assays were performed according to the manufacturers protocols using Universal Microplate Reader ELX800NB (Bio-Tek Instruments INC, Vinooski, VT, USA) and for both tests, the absorbance was measured at 540 nm.

In conclusion CA modestly activates AMPK, while Met exerts its effect on FA biosynthesis by downregulation of several enzymes involved in the de novo synthesis of long unsaturated FA, such as ACLY, FAS, ELOVL6, and SCD1. CA and Met induce cell death in human cervical metastatic cells by two independent mechanisms, CA by increasing ROS production and Met by suppressing of substrate formation for FA biosynthesis. The treatment of neoplastic cells with both compounds provides a promising approach to evoke metastatic cervical HTB-34 cells death.

This research was supported by the grant from Jagiellonian University Medical College, K/ZDS/005624 by KNOW—Leading National Research Centre 2012–2017. 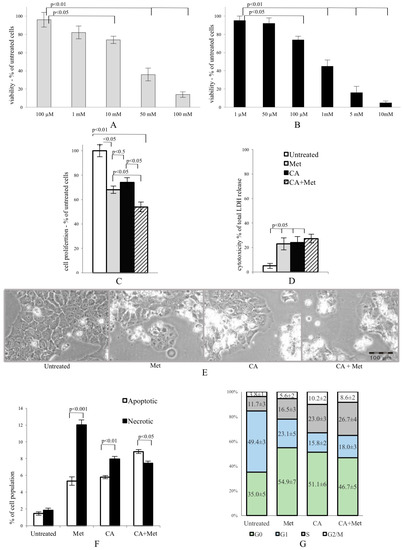 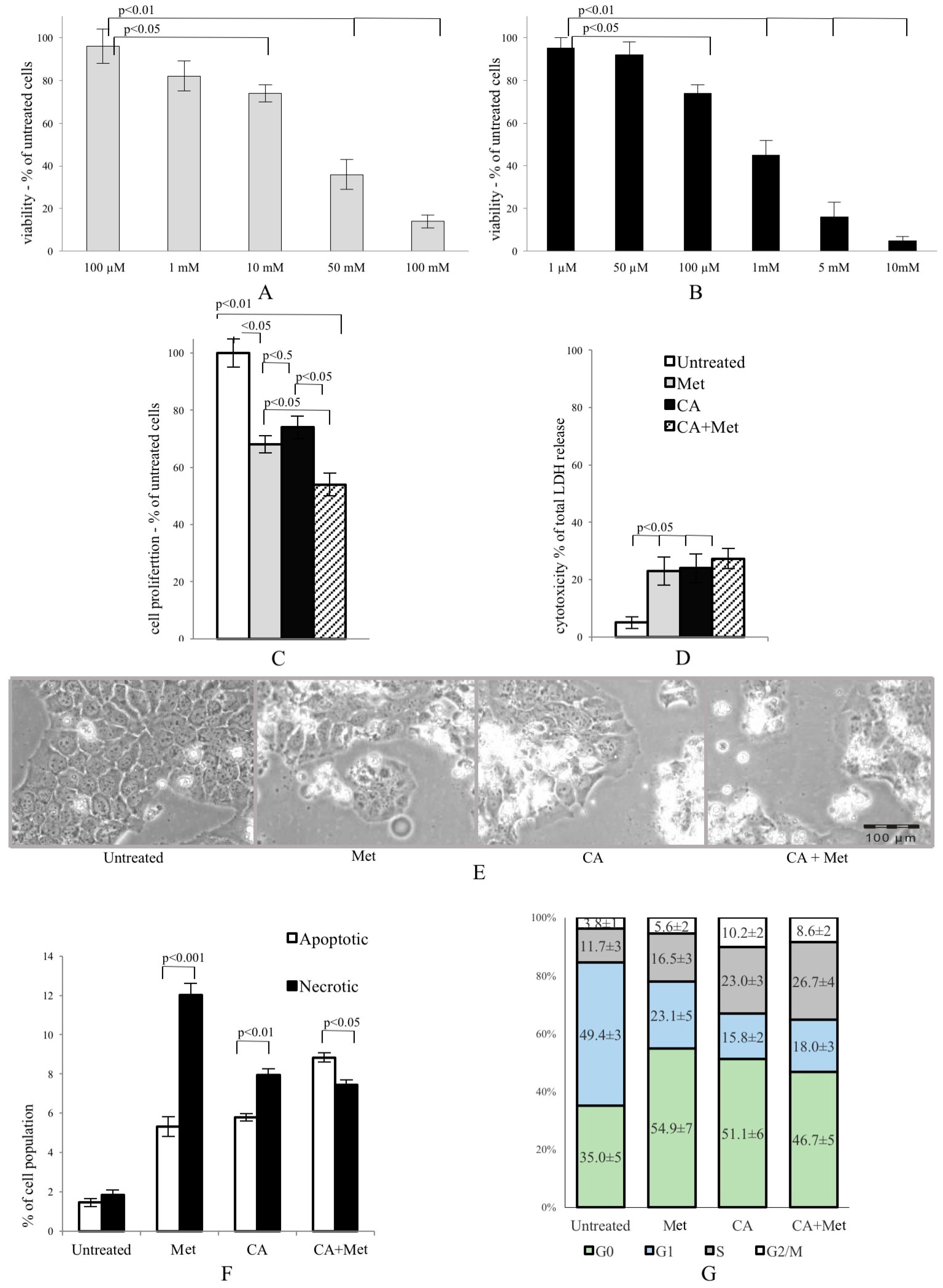 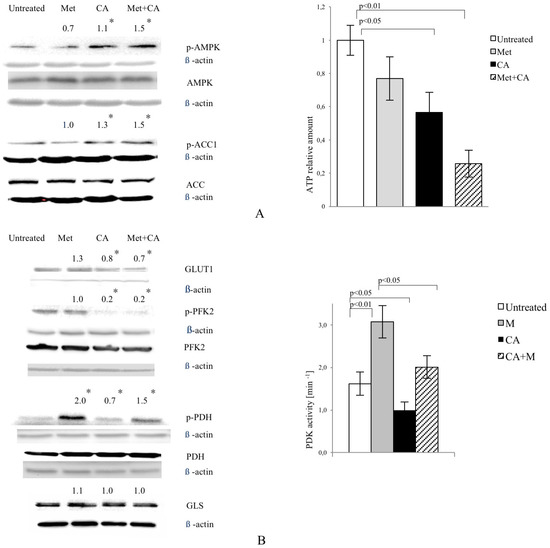 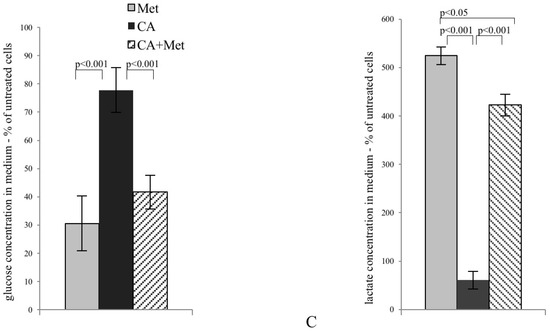 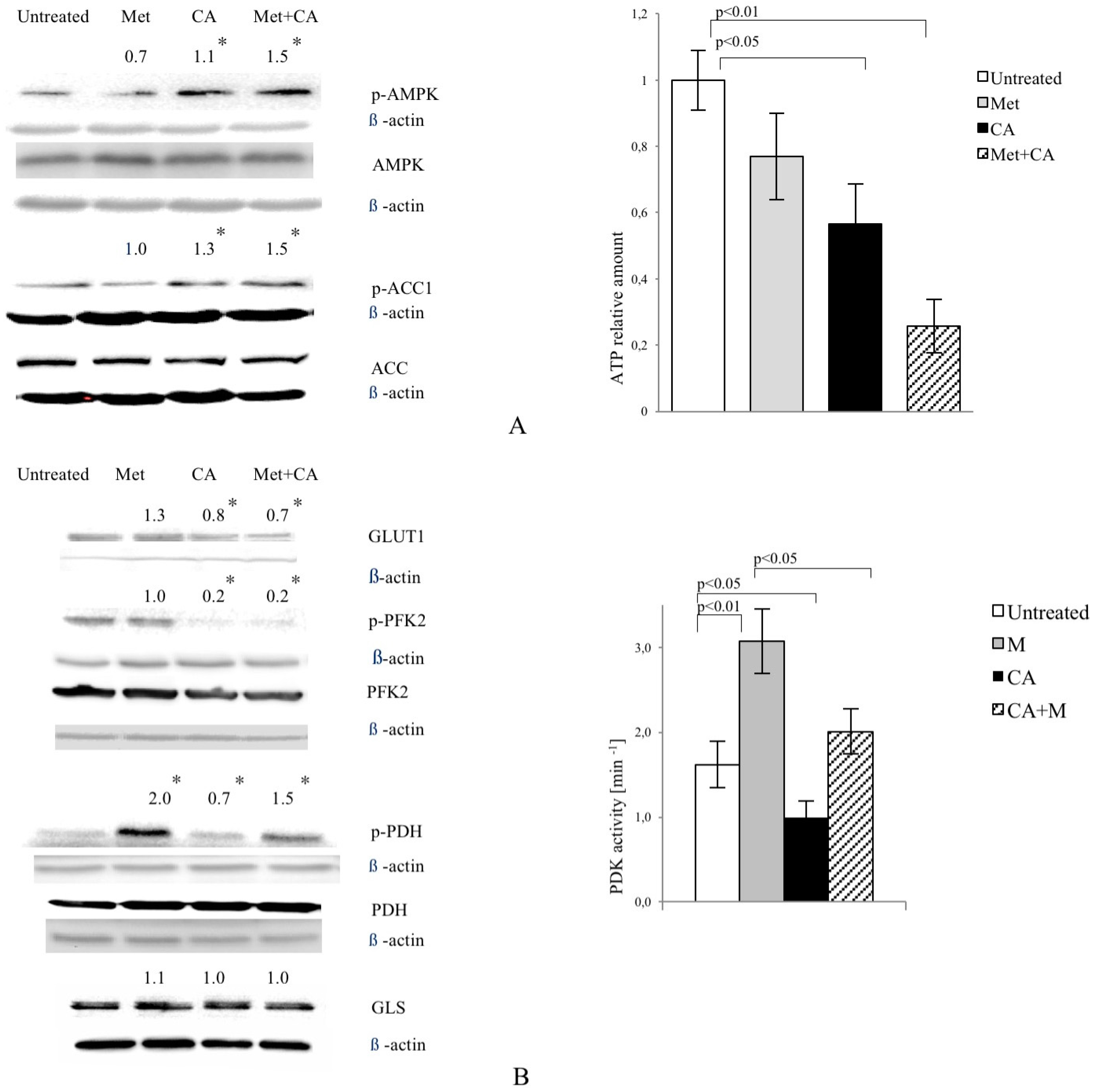 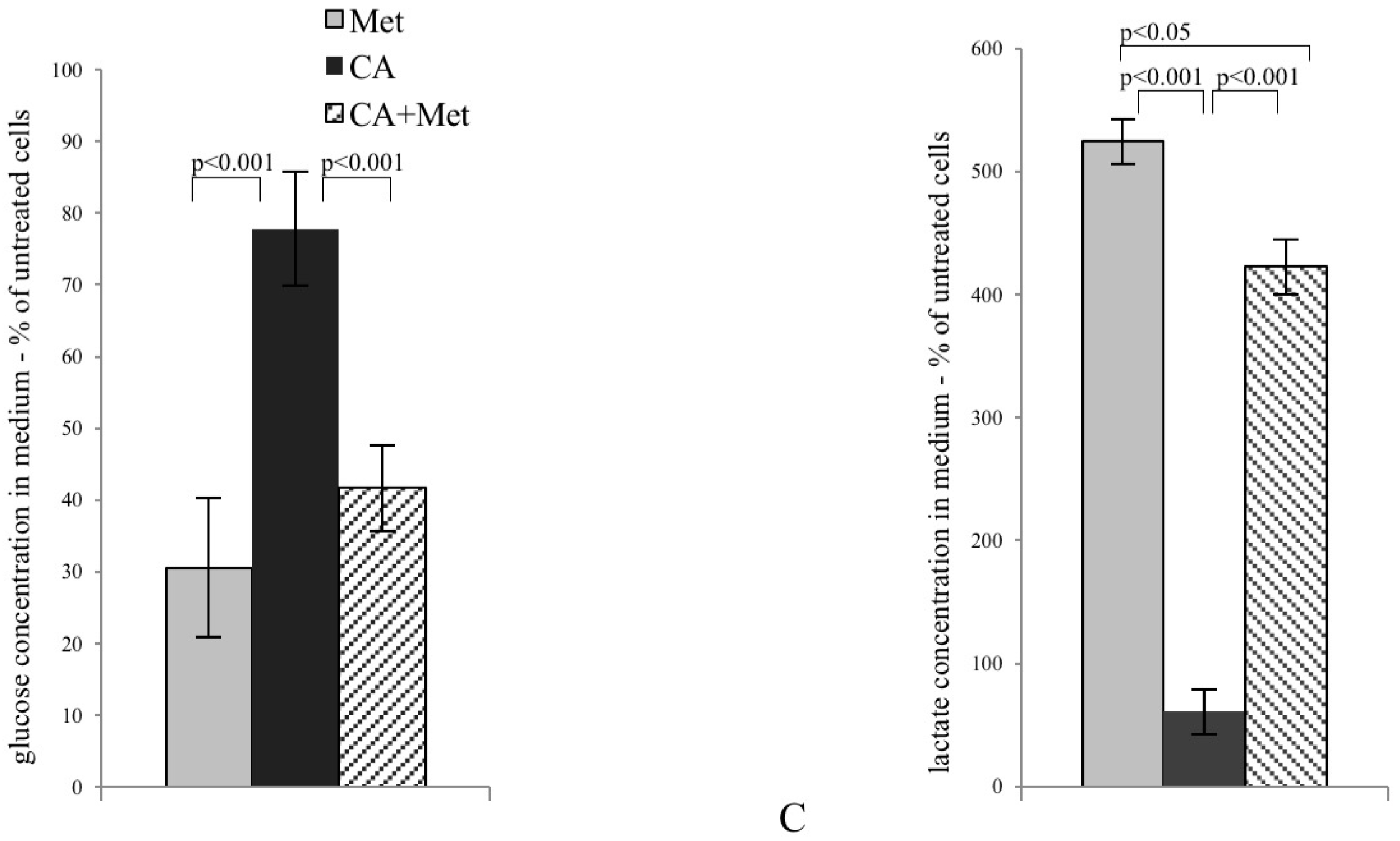 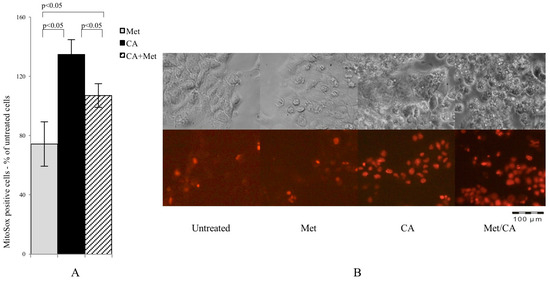 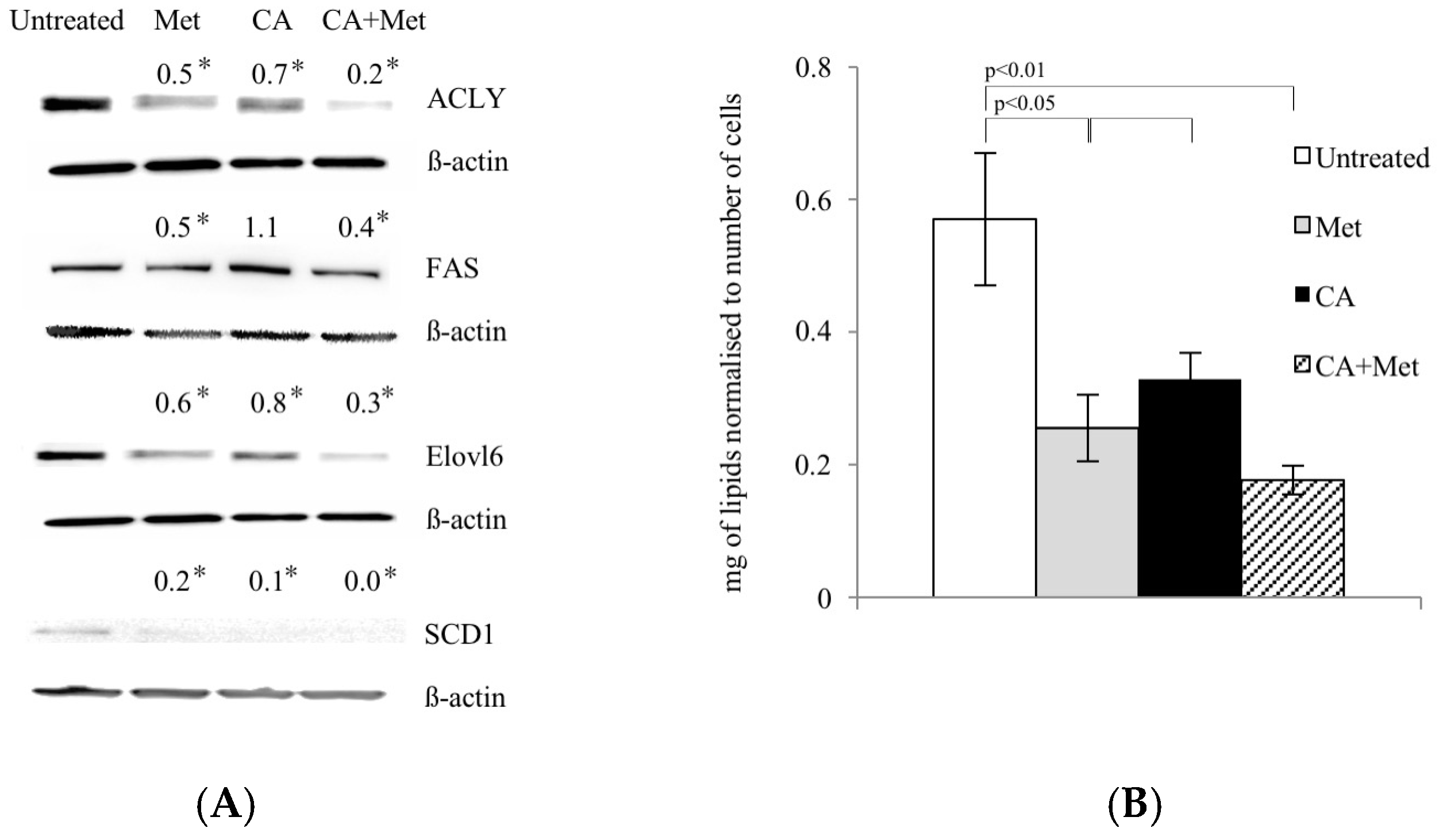 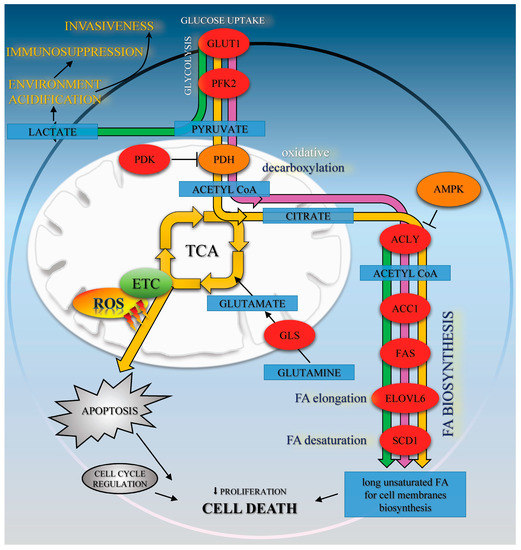 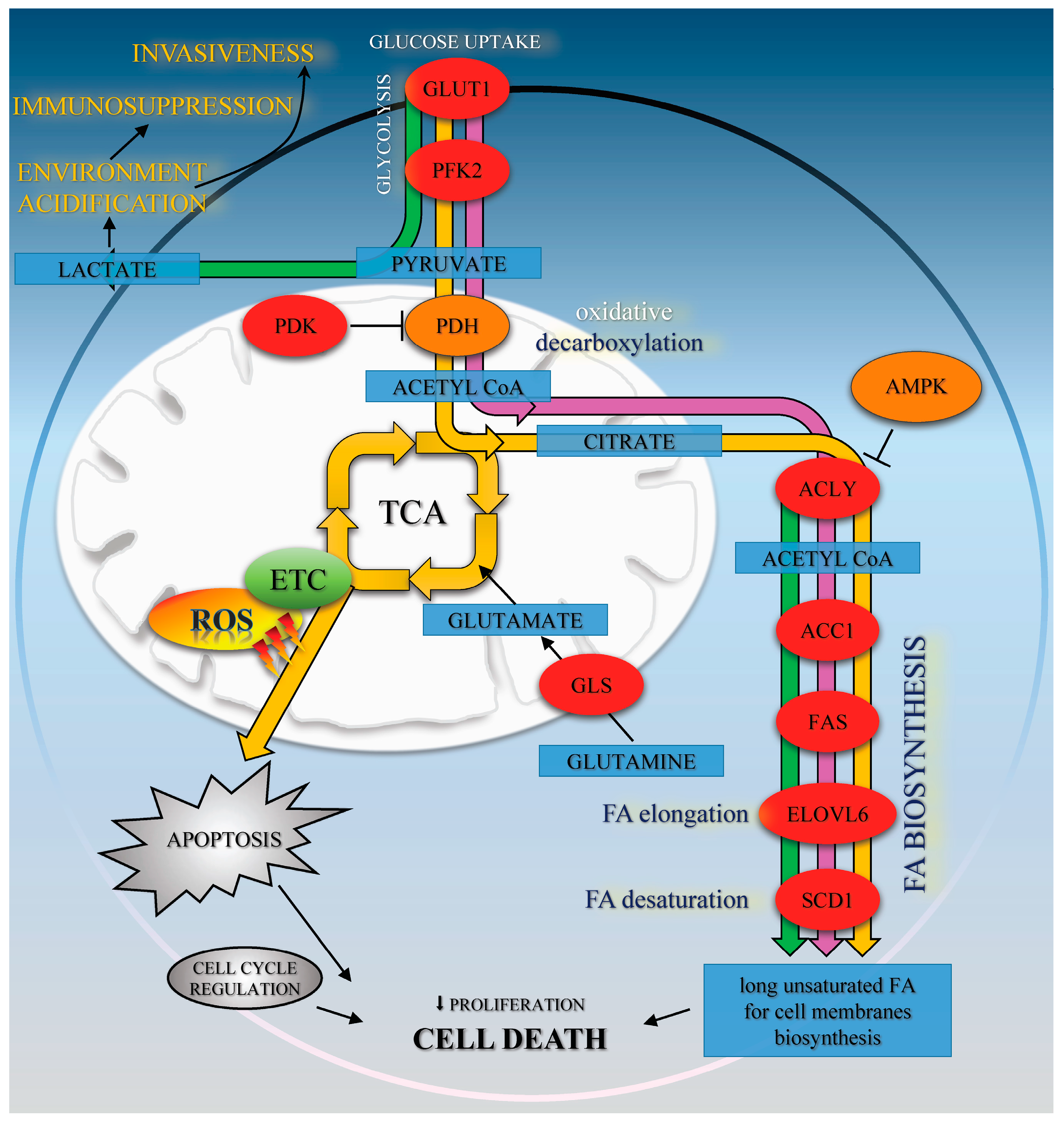