The Adverse Effects of Triptolide on the Reproductive System of Caenorhabditis elegans: Oogenesis Impairment and Decreased Oocyte Quality
Previous Article in Journal

Sex differences have been identified in various biological processes, including hypertension. The mineralocorticoid signaling pathway is an important contributor to early arterial hypertension, however its sex-specific expression has been scarcely studied, particularly with respect to the kidney. Basal systolic blood pressure (SBP) and heart rate (HR) were measured in adult male and female mice. Renal gene expression studies of major players of mineralocorticoid signaling were performed at different developmental stages in male and female mice using reverse transcription quantitative PCR (RT-qPCR), and were compared to those of the same genes in the lung, another mineralocorticoid epithelial target tissue that regulates ion exchange and electrolyte balance. The role of sex hormones in the regulation of these genes was also investigated in differentiated KC3AC1 renal cells. Additionally, renal expression of the 11 β-hydroxysteroid dehydrogenase type 2 (11βHSD2) protein, a regulator of mineralocorticoid specificity, was measured by immunoblotting and its activity was indirectly assessed in the plasma using liquid-chromatography coupled to mass spectrometry in tandem (LC-MSMS) method. SBP and HR were found to be significantly lower in females compared to males. This was accompanied by a sex- and tissue-specific expression profile throughout renal development of the mineralocorticoid target genes serum and glucocorticoid-regulated kinase 1 (Sgk1) and glucocorticoid-induced leucine zipper protein (Gilz), together with Hsd11b2, Finally, the implication of sex hormones in this sex-specific expression profile was demonstrated in vitro, most notably for Gilz mRNA expression. We demonstrate a tissue-specific, sex-dependent and developmentally-regulated pattern of expression of the mineralocorticoid pathway that could have important implications in physiology and pathology. View Full-Text
Keywords: mineralocorticoid signaling pathway; sexual dimorphism; gene expression; hypertension mineralocorticoid signaling pathway; sexual dimorphism; gene expression; hypertension
►▼ Show Figures 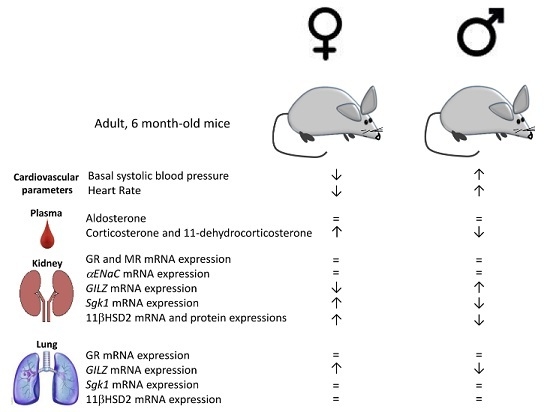