The content of hyaluronan (HA) in the interstitium of the renal medulla changes in relation to body hydration status. We investigated if hormones of central importance for body fluid homeostasis affect HA production by renomedullary interstitial cells in culture (RMICs). Simultaneous treatment with vasopressin and angiotensin II (Ang II) reduced HA by 69%. No change occurred in the mRNA expressions of hyaluronan synthase 2 (HAS2) or hyaluronidases (Hyals), while Hyal activity in the supernatant increased by 67% and CD44 expression reduced by 42%. The autocoid endothelin (ET-1) at low concentrations (10−10 and 10−8 M) increased HA 3-fold. On the contrary, at a high concentration (10−6 M) ET-1 reduced HA by 47%. The ET-A receptor antagonist BQ123 not only reversed the reducing effect of high ET-1 on HA, but elevated it to the same level as low concentration ET-1, suggesting separate regulating roles for ET-A and ET-B receptors. This was corroborated by the addition of ET-B receptor antagonist BQ788 to low concentration ET-1, which abolished the HA increase. HAS2 and Hyal2 mRNA did not alter, while Hyal1 mRNA was increased at all ET-1 concentrations tested. Hyal activity was elevated the most by high ET-1 concentration, and blockade of ET-A receptors by BQ123 prevented about 30% of this response. The present study demonstrates an important regulatory influence of hormones involved in body fluid balance on HA handling by RMICs, thereby supporting the concept of a dynamic involvement of interstitial HA in renal fluid handling. View Full-Text
Keywords: hyaluronan; kidney; interstitium; medulla; endothelin; vasopressin; angiotensin II hyaluronan; kidney; interstitium; medulla; endothelin; vasopressin; angiotensin II
►▼ Show Figures 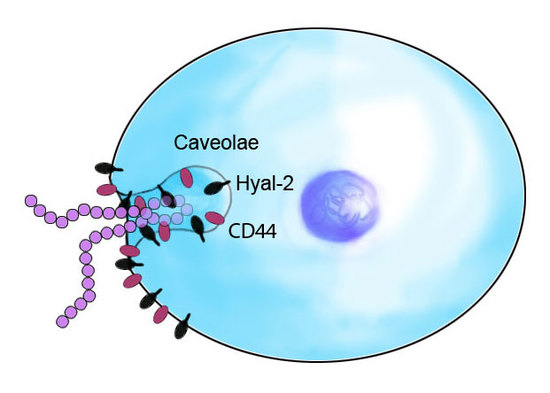