Sphingolipids, long thought to be passive components of biological membranes with merely a structural role, have proved throughout the past decade to be major players in the pathogenesis of many human diseases. The study and characterization of several genetic disorders like Fabry’s and Tay Sachs, where sphingolipid metabolism is disrupted, leading to a systemic array of clinical symptoms, have indeed helped elucidate and appreciate the importance of sphingolipids and their metabolites as active signaling molecules. In addition to being involved in dynamic cellular processes like apoptosis, senescence and differentiation, sphingolipids are implicated in critical physiological functions such as immune responses and pathophysiological conditions like inflammation and insulin resistance. Interestingly, the kidneys are among the most sensitive organ systems to sphingolipid alterations, rendering these molecules and the enzymes involved in their metabolism, promising therapeutic targets for numerous nephropathic complications that stand behind podocyte injury and renal failure. View Full-Text
Keywords: sphingolipids; Fabry’s disease; sphingolipid metabolism; podocytes; renal injury; renal failure sphingolipids; Fabry’s disease; sphingolipid metabolism; podocytes; renal injury; renal failure
►▼ Show Figures 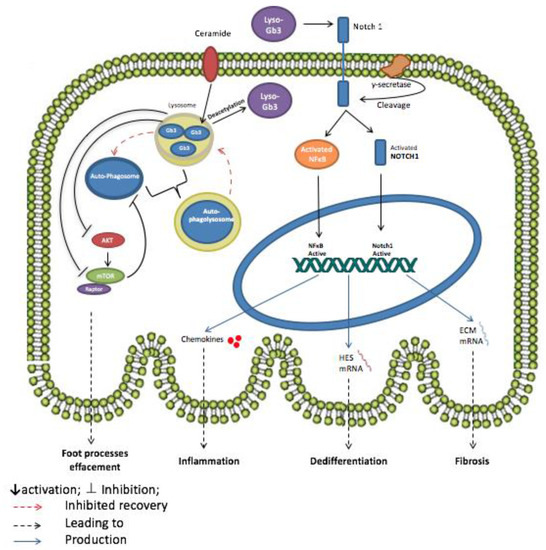